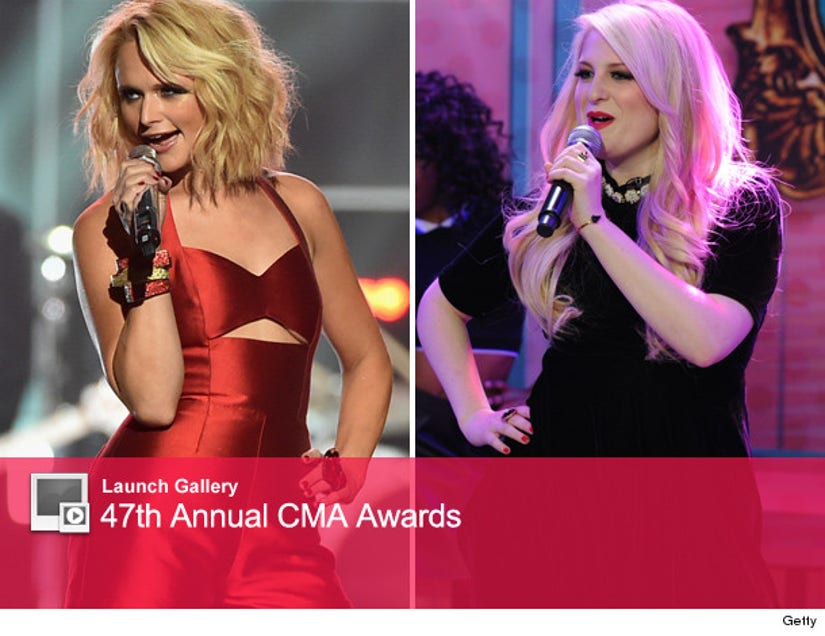 NASHVILLE, Tenn. (AP) - Blake Shelton isn't the only person Miranda Lambert is texting these days — she's also been chatting it up with breakthrough singer Meghan Trainor.

The country star, who will perform with the "All About That Bass" singer at the Country Music Awards, said she has yet to meet the newcomer with the year's biggest hit.

"I've not met Meghan yet, but we've been texting back and forth," Lambert said in an interview Monday in Nashville, Tennessee, where the CMAs will be held Wednesday. "We've listened to 'All About That Bass' probably about a thousand times this summer on the tour, so I already know it, obviously."

"Bass" is spending its eighth week on top of the Billboard Hot 100 chart. Trainor, who released an EP this year, will drop a full-length album in January and launch a tour a month later.

The doo-wop pop song has sold more than 3 million tracks so far.

"It's a song about positive body image and kind of rocking what you got, and I am all about that," Lambert, 30, said about "Bass."

Lambert, who is the lead nominee at the CMAs with nine, says she and Trainor will make a "great match."

"I think we're probably going to feel like we've known each other for a while," she said. "Probably feel like we're kindred spirits."

Trainor grew up in Nantucket, Massachusetts, but recently moved to Nashville, Tennessee, where she was signed to a publishing house. She wrote songs for Rascal Flatts and others.

"Maybe we'll spike up a friendship (and) we can write up some songs together," Lambert said. "That would be amazing. She's a great writer."

The 2014 CMAs will air live on ABC from the Bridgestone Arena.