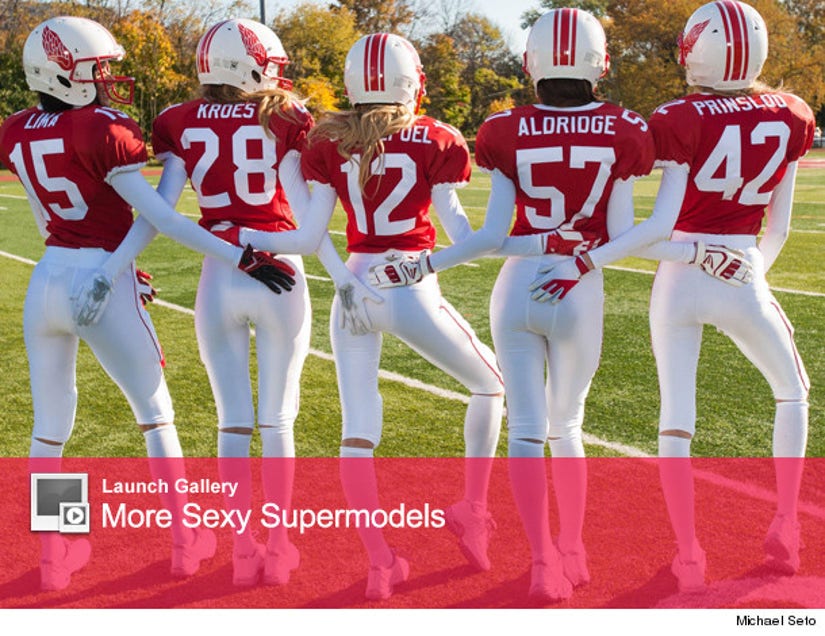 Victoria's Secret's hottest Angels are strutting their stuff ... on the field!

In the commercial, the five supermodels show off their best snaps, runs, and touchdowns before taking off their helmets and shaking out their perfectly tousled hair.

The ad closes with the message "Don't drop the ball," followed by "It's not Valentine's Day without Victoria's Secret."

Check out the sneak peek below. Now, that's how you get football fans interested!

Another celeb to lend her talent to the Super Bowl is Mindy Kaling, who is starring in a new spot for Nationwide.

After ignored for years, it occurs to the actress the she might just be invisible. She then takes full advantage of her supposed powers, stealing food from unsuspecting strangers' plates or tanning in Central Park fully nude.

But, as she soon finds out, Mindy was actually not invisible. Whoops!

"My writers and I had so much fun brainstorming ideas for this ad because it was all about wish fulfillment," the "Mindy Project" star said on "Good Morning America." "All of us, even beautiful, young Hollywood celebrities like me, have been in situations where we feel invisible."

Check out the rest of the ad when it airs during the second quarter!

Carl's Jr.'s Super Bowl spot is already cooking up controversy and will only be seen on the West Coast.

The ad is called "Au Naturel," and indeed, it appears to show model Charlotte McKinney walking around in the buff -- with strategically-placed objects covering her up.

"Charlotte McKinney loves going All-Natural, especially when it comes to her burger," says the brand. "Introducing fast-food's first All-Natural Burger with grass-fed, free-range beef that has no added hormones, steroids, or antibiotics."

While many say the commercial is inappropriate for younger viewers, there is a PG twist at the end, of course!