Han Solo, Chewie and Luke Skywalker are all back in the just released trailer for "The Force Awakens" ... which we'll be watching on repeat for the rest of the day.

Featuring our first glimpses at those familiar faces, some freaky shots of the new enemy and a glimpse at Darth Vader's crushed mask, we've got goosebumps!

The only words we hear come from Mark Hamill, echoing a line from "Return of the Jedi," who says "The Force is strong in my family. My father has it. I have it. My sister has it. You have that power too"

The last part of that quote is a new addition, as we then see someone with a prosthetic hand (likely Luke) handing off a lightsaber to someone else.

Geeks from around the globe flocked to Anaheim, California today for Day 1 of Star Wars Celebration.

The festivities kicked off with an hour-long panel for "The Force Awakens," the highly-anticipated next chapter of the beloved film franchise.

Director J.J. Abrams -- who sent pizza to fans waiting outside the convention overnight -- and Lucasfilm president/producer Kathleen Kennedy were on hand to present brand new footage from the film and answer some burning questions we all have about the flick.

During the panel, it was revealed that J.J. was reluctant to take on the directing gig at first.

"I said no partly because it was incredibly daunting thing," he said. "It felt like I'd been doing sequels and things in the past and I wanted to break away from that. I really thought I would say no, but [after talking w/ Kathleen] it was impossible."

Abrams also talked about the emphasis on practical effects for this film -- and fans in the crowd went crazy.

"The thing that struck me and it wouldn't get out of my head is just how real you know and felt 'Star Wars' was when you saw 'A New Hope.' It's 'Star Wars,' there's going to be an endless number of effects, CG and otherwise, but we needed to set a standard that was real. You want it to be legitimate. Building as much as we possibly could was the mandate."

The director shared behind-the-scenes photos from the set, showing them working in Abu Dhabi. While many assumed the desert planet seen in the first teaser was Tatooine, it's actually a new locale called Jakku (we're totally guessing on the spelling there).

Other tidbits from the panel:

- Kathleen said Harrison Ford, who was just in a scary plane crash, is "home and resting and getting well as fast as he can. By the time we open this movie, Han Solo will be actively involved in what we're doing."

- Star Daisy Ridley says we meet her character, Rey, on the desert planet Jakku. "She's a scavenger. She's self-sufficient and very solitary, until she meets another character and the adventure begins."

- Oscar Isaac described his X-Wing pilot, Poe Dameron, as "the best fricking pillot in the galaxy" who's been sent on a mission by a "certain princess."

- John Boyega is such a fan of the original franchise, he brought a Han Solo doll to set for Harrison Ford to sign. Harrison's reaction: "This is weird, but I'll sign it for you."

- Boyega also revealed he never told his parents he got the "Star Wars" gig until the first official cast photo was released.

- Peter Mayhew, who was hospitalized with pneumonia earlier this year, hit the stage with a lightsaber cane.

- Carrie Fisher said we won't see her most famous hairstyle or costume return for the new film. "The buns are tired now," she said. "But I think we'll have an alternate thing you'll be very into ...and it's not the metal bikini."

Check out INCREDIBLE the trailer above -- and see some behind-the-scenes photos from the set below! 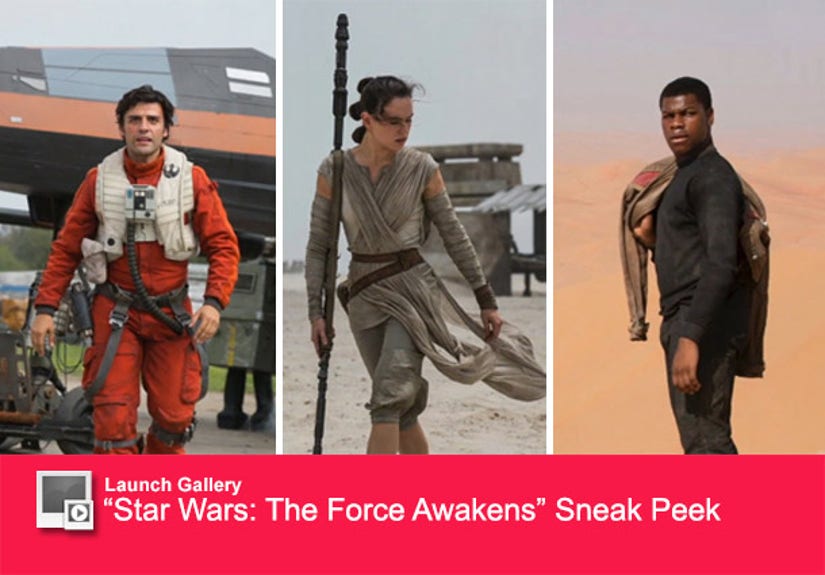