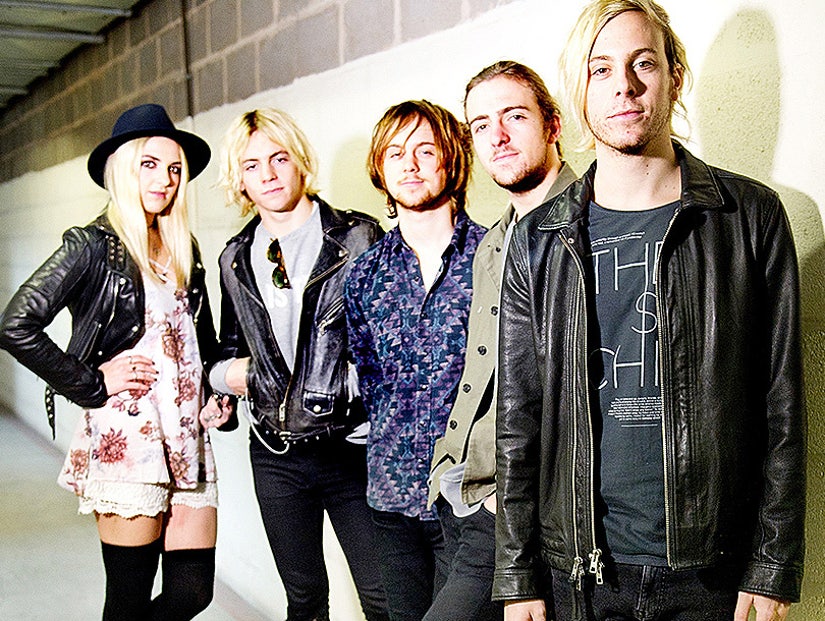 This has been an epic year for R5 -- and they're ready to go out with a bang!

After releasing a new album, hitting the road for a world tour and Riker Lynch's gig on "Dancing with the Stars," the band is ready to say goodbye to 2015 with a series of shows at The Venetian in Las Vegas on December 29, New Year's Eve and January 1. On NYE, Carly Rae Jepsen will also hit the stage following their performance -- check out ticket info here.

While the group -- including siblings Riker, Rocky, Ross and Rydel Lynch and her BF Ellington Ratliff -- is currently touring South America, Riker fielded some questions from toofab about their plans for 2016, their wild life on the road and how they're going to ring in the new year.

Keep reading for the full Q&A!

toofab: You guys will be performing on Ross' 20th birthday — do you have any plans to celebrate while you're in Las Vegas, outside of your performances?

We'll definitely be having some sort of celebration, or party in our hotel room … and maybe some surprises for him on stage.

toofab: How will you ring in the New Year after your performance on the 31st?

We're having a very large family dinner; lots of family are coming to Vegas to see the shows. And I'd say by 12:01 we'll be heading to one of the night clubs.

I really want to get a movie under my belt. I've had some meetings about a couple movie opportunities that I would love to be apart of.

toofab: What were your most memorable moments of 2015?

I definitely have a few: Making the album was so much fun and while we were doing that I was also doing "Dancing with the Stars" at the same time, great experience. Our Sometime Last Night World Tour has given me some amazing memories. The fact that this is our second world tour, playing five different continents is so crazy and so insanely fun. I've had a incredible year. Can't wait to see what happens next.

toofab: You guys are currently on tour — can you reveal any crazy moments from the road?

Ok here's one of my favorite crazy moments: we're on our Europe tour in Madrid, the venue was right by a grocery store and as it happens, we didn't get a great breakfast that morning. So, I thought, let's go buy one of those portable skillets you can plug in and we'll make some eggs. We were able to sneak around the long line of fans outside the venue, but we end up running into another group of fans at the store. They spoke fairly good English so they helped us find what we needed. Then another group of fans spotted us; we take pictures and they go on their way. At this point I get separated from Ellington and Rocky and while I'm paying one of the fans helping us looks at her phone and goes, "Uh oh… someone tweeted that you guys are down here and the long line of fans from the venue are running down here right now!" I pay, run to find Rocky and Ellington, explain the situation, and we make a run for it with the first set of fans showing us the way. Apparently they didn't really know the best way to go and lead us straight into another big group of the fan line waiting outside the venue. We tried again to make a run for it, accidentally running the wrong way around the building missing the entrance! We eventually made it in but there must have been 200 screaming fans chasing us.

That night we went out to what was the hot new club there. It was a rock 'n'roll dance club. So not like a live music club but a dance club that played rock 'n' roll music all night. It was pretty epic - "Bohemian Rhapsody" was playing when we walked in and it played two more times that night. And not just a minute of the song they played the WHOLE thing! I wasn't sure if that was just everyone's favorite song there or if we just stayed for a really long time. (laughs)

toofab: Do you get a lot of downtime to enjoy some of these cities you're visiting? What's been your favorite spot?

We try to make time to see the cities and explore a bit but it depends on our schedule really. We're in Rio, Brazil, today which is so beautiful. It's full on summer weather here so we're loving that. A couple other favorite places of mine are Rome, Italy. We also went to Milan and Venice. I just love Italy. And we played the Bahamas for the first time this year which was simply paradise. I love a good island vibe.

toofab: For Rydel, how is it being the only female in the group while on the road?

I think she loves it! I don't think she'd like it as much if there were another girl in the group.

toofab: How do the fans abroad compare to your US fans?

I think Bruce Springsteen said it best and I completely agree 100%. He said, and I'm just paraphrasing here, "Fans in the US come to see the show and fans abroad come to be a part of the show."

The best part is simply traveling around the world seeing the fans and playing shows night after night. The hardest part is not getting to sleep until very late and having a super early call time the next morning. And sometimes venue showers are really kinda nasty.

toofab: What can you fans look forward to from you guys in 2016?

Besides having a crazy party one last time at The Venetian on January 1st?! (laughs) Honestly, I have no idea! We'll be touring in Japan, Australia, and New Zealand, and then a US tour starting January 25th - that may be our last tour for a while. We definitely want to make another record but I think we'll take some time for it. Ross and I are wanting to do some acting so we'll see what happens.