So this is what Kylie Jenner was shooting in the middle of the desert!

Just days after photos surfaced earlier this week showing the reality TV star filming a mysterious music video, the clip is here -- and it's pretty crazy.

No ... she's not launching a music career (yet anyway). Instead, the three-minute spot is promoting her new line of lip gloss, which goes on sale Friday, April 1.

The video starts with Jenner driving her Rolls Royce through the desert, sporting a Louis Vuitton headscarf, reptile-print crop-top and matching, skin-tight pants. She pulls up in front of a motel, where some kind of trade is going on inside.

Out of nowhere, the video takes a violent turn -- as the women turn on the men, holding them up for their cash. Kylie continues to wait in the getaway car, texting, upgrading her outfit and popping bubbles, before her gang runs out and jumps in. They drive off, throwing some of the money in the air as they speed away.

The video ends with the women getting arrested, as they're seen in a police lineup. 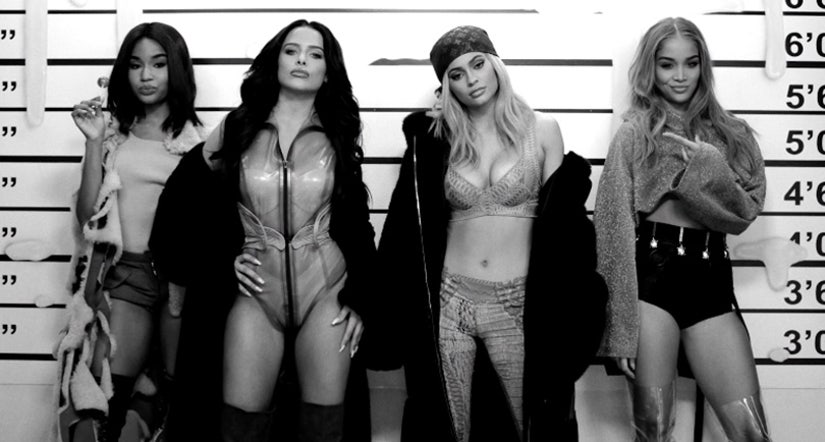 While Colin Tilley directed the video, we're told that Kylie came up with the concept and was a producer on the shoot.

While many fans have speculated that the 18-year-old fashionista is also the one singing on the heavily auto-tuned background track, we're told that's not that case. Sorry, no word on what the song is.

Kylie's glosses are coming tomorrow -- and no, this is no April Fool's joke.