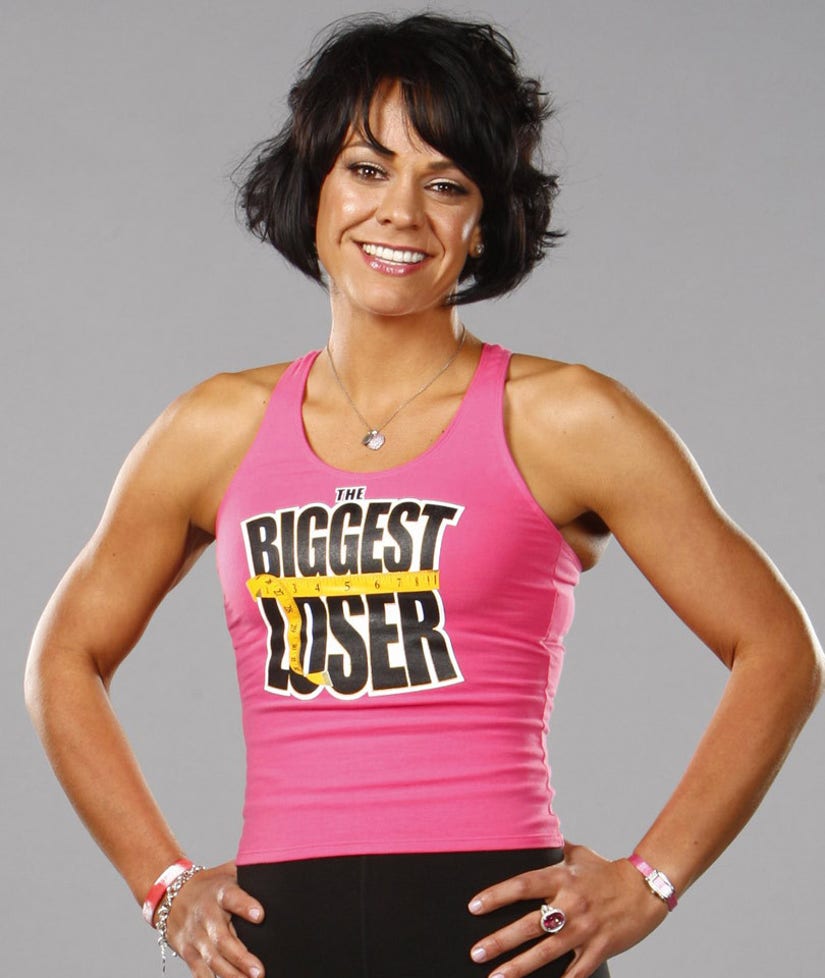 Eight years after becoming the first woman to win "The Biggest Loser" in the show's fifth season, Ali Vincent is back to where she started.

The former reality TV star, who dropped 112 lbs. on the show in 2008, recently revealed she put all the weight she lost back on in the years since. In a new interview with toofab, she tells us she currently weighs 234.8 lbs, after starting "Biggest Loser" at 234.7.

Ali says the gain was gradual, but it got to a point where her "fans" started calling her out on it. In fact, after she did a Facebook video for Girl Power 2 Cure -- an organization raising money and awareness for Rett Syndrome treatment -- most of the comments were about her appearance, not about how to help the cause. "Sure as s--t, as soon as that video went live and people were on there, everything was about my weight," she tells us. "'Oh, my God, look how fat she is,' 'Oh, my God, I can't even believe she did that to herself.' Just like, really, really mean commenting, you know?"

Vincent, who made a living doing public appearances at speaking events following her win, says her weight gain affected the offers coming her way too. "I don't have a career if I'm fat again," she says, revealing that one woman who invited her to speak at a leadership event stopped responding when Vincent was up front about her weight gain.

In a brutally honest tell-all, Ali reveals why she kept her weight gain a secret from her fans, opens up about her new fitness journey and explains why she'd never go on the reality show again.

Check out our full interview with Ali, 41, below. And check in with other former "Biggest Loser" winners in the gallery above!

toofab: What has the reaction been like for you since you revealed your weight struggle earlier this month on Facebook?

Ali: Honestly, it's been really overwhelming. I've just been feeling so alone lately. I was prepared for the not positive, honestly, because so many people just find it so easy to poke fun at people or pick people apart online.

Although they started as fans, they really are people who I kind of depended on as a support network. Lately, I just felt so disconnected. I felt like I was just so out of control, and so far from where I wanted to be, and feeling good about myself, I just didn't feel like it was something that I could share.

It wasn't like something that happened overnight, or that I consciously did. I just got further and further away from where I wanted to be, and then I just felt like I was in an impossible place. And I just was depressed. A lot of things in my life changed, you know. I lost my job, which was the show, and I moved, and so I didn't have my support network. It's daunting to think that I have to do this again.

Ali: The other day, when it was my anniversary [of her win], it was the first time that I didn't post on Facebook about my anniversary. I can't forget my anniversary of winning, because it's Tax Day. Everybody in America knows what day that is. The finale was such a life-altering moment of my life, so I have always posted throughout the years, pictures, the journey and stuff.

On my anniversary night, I was online, and hadn't done anything all day, just was like a slug. Some of my other cast members had posted about it being our anniversary. And so I just got on Weight Watchers. And I called my wife, and I was like, "Will you do Weight Watchers with me?" And she was like, "Absolutely." And so I signed up for it, and it was huge and it was scary.

toofab: And why did you decide to sign up for group meetings too?

Ali: I know what I'm supposed to do [to lose weight]. I need people. I need help. I need that social aspect of it, that social accountability and support. That's how I thrive. I had to go in that next day and weigh in, and...it was just - it was so hard to walk through doors of that Weight Watcher building.

Here I am, eight years later, 234.8 [pounds] and I started "Biggest Loser" at 234.7, it was just crazy. I'm sitting there, you go the meetings, but I know all this. It doesn't matter that I know though, I'm not doing it. I shared and I just started bawling. I was so ashamed and embarrassed and just terrible, I felt terrible. Everybody's who's dealt with weight loss and gain, maybe not as drastically as me, they know what that feels like. I put too much pressure on myself and it wasn't fair of myself to do. Just because I'm Ali Vincent doesn't mean I'm not going to have problems the rest of my life. I need to start over. I want to do it differently this time.

toofab: Do you think the show set up unrealistic expectations from fans for what you should look like? Do they offer any help/counseling after the show?

Ali: "The Biggest Loser" is way different now than when I was on there. It's owned by a different company. After I won, there wasn't any support network for contestants after, but they started seeing a need for it. Each time they heard something new, they did something aboutit. In the beginning, they didn't realize how much impact it would have on everybody.

toofab: Would you do the show again, if they asked you right now?

Ali: I would never do "The Biggest Loser again." I won "The Biggest Loser," been there, done that. I know how to win "The Biggest Loser." I want to learn how to live my life. I have no doubts that if I did it again, I would win it again, but I'm not going to do it again. I know that anybody can do anything that they put their mind to, if that's your focus and all you're doing. It was a very rewarding experience in many ways and I continue to pay high prices for that experience, as well as high gains. I didn't realize either was coming after that experience, I just wanted to feel better about myself.

I saw those Oprah [Weight Watcher] commercials. She's f--king Oprah, she's doing it again! It's not about weight. Weight is a good way to check in, but I want to feel good again, be my best self. I want to learn how to live a healthy lifestyle in a healthy way. It's like when your training for anything on a high level, they're very regimented. But you can't live your entire life regimented like that. I'm not one of those people. I don't want to spend hours in the gym, I don't want to think about my food all the time. I would count the calories on cauliflower or strawberries [before]. You burn more eating it! I don't want to be healthy in that way, it wasn't as healthy as it could have been. I was skinny, but I wasn't healthy. I struggle with balance. I have my goal of 140 and as I go down and get to there, we'll reevaluate. I don't know how long it will take to get there, I'm not putting that pressure on myself. I'll commit to getting my meetings, getting my workouts in and doing everything I need and want to do in my life.

toofab: Are you already feeling a change?

Ali: I can't even tell you how different I feel today. It hasn't even been a week and I feel so much better. The tears still come, it's like coming out over and over again. It's scary, I don't know why it's scary but it is. My friends, they know me, but they don't know that I feel this bad about myself. People were afraid to talk to me about it, knowing that I desperately wanted support but not knowing how to support me and I wasn't really open for the support because I had walls up. It was a touchy subject, even for the people closest to me.

The comments [from fans], I read all of them. All the people I met throughout the years, them telling me what I told them. It's been amazing. I just didn't realize the impact, I was meeting lots of different people, but I didn't realize how it would come back around to support me again. It's helped me get up and do my steps when I don't want to.