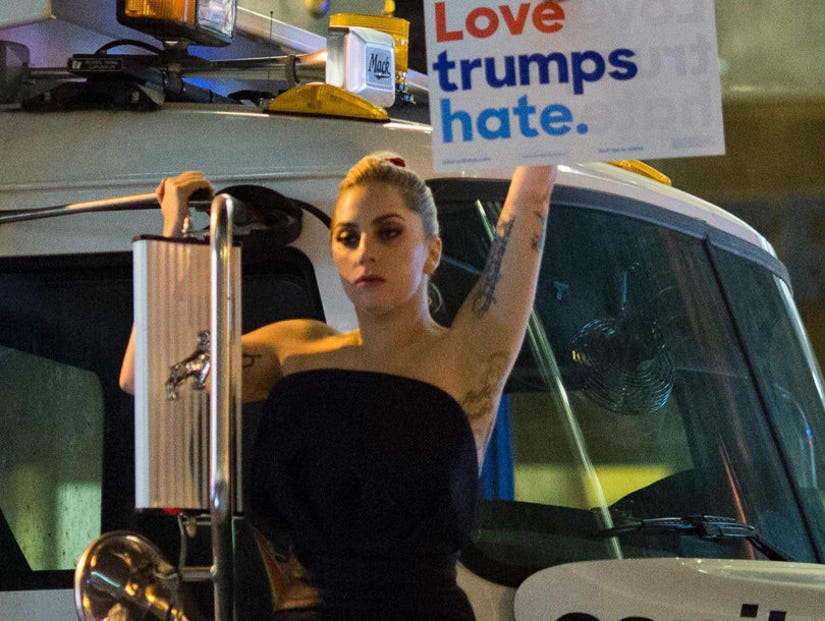 Lady Gaga isn't nearly done with the election, even though her preferred candidate lost in a shocking upset.

In a photo that appears to have been taken moments before Donald Trump was announced victorious, the singer is seen outside of Trump Tower holding up a sign reading "Love trumps hate" atop a garbage truck. She also tweeted a similar photo to her 64 million followers and said, "I want to live in a #CountryOfKindness where #LoveTrumpsHate."

Earlier, she tweeted, "In a room full of hope, we will be heard. @deray #blacklivesmatter Stand up for kindness, equality, and love. Nothing will stop us."

Her previous Twitter handle read #VoteHillary," but she eventually changed it to "CountryOfKindness."

She isn't the only one avoiding the direct bashing of the new President-elect. Other celebrities offering a more diplomatic point of view included James Van Der Beek, who tweeted, "Choosing to believe Trump voters were sick of the establishment (a feeling we all share to some degree) and valued change above all else. Hillary voters: Trump voters aren't all racist misogynistic bullies at heart... they wanted change, and didn't think Hillary was capable."

"Trump voters," Van Der Beek pleaded. "In his victory, can we all take a breath and acknowledge the racism, misogyny & bullying we all find unacceptable?"

It's definitely nice to see there are still glimmers of hope in Hollywood, among all the disappointment. See more celebrity reactions in the gallery above.