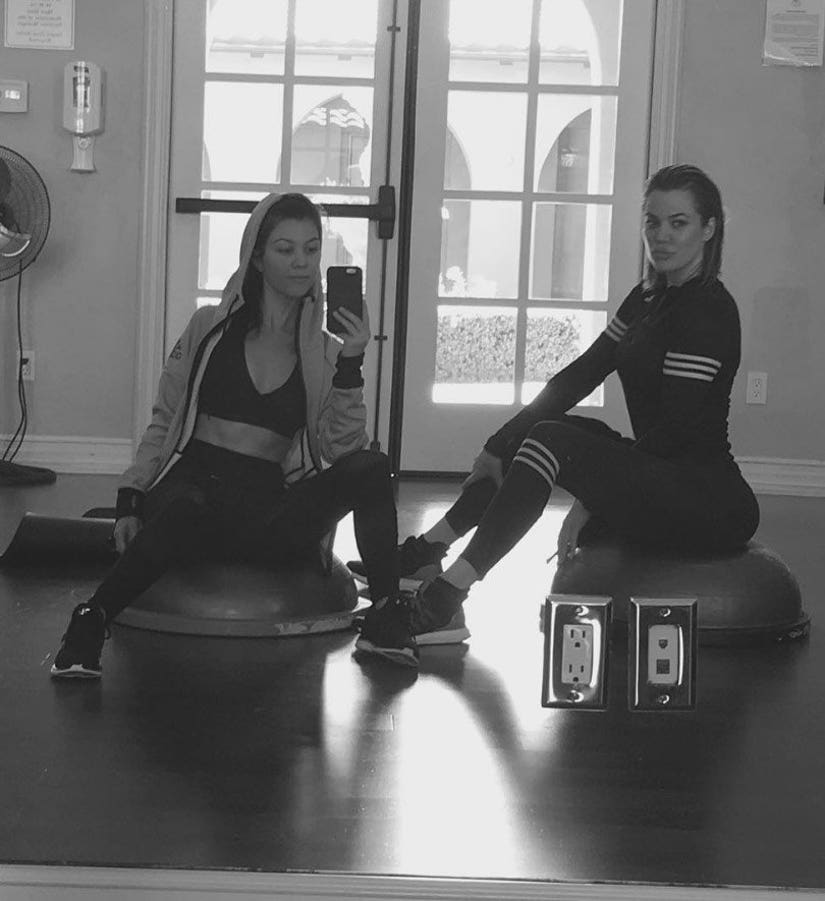 Workouts are a family affair for the Kardashian-Jenner family--kind of.

Khloe Kardashian took to her blog to reveal her and her famous sisters' workout habits--or lack thereof--in a post entitled "What It's Like to Work Out with Each Family Member," and it appears that not all of her siblings are as committed to exercising as she is.

It's no secret that the 32-year-old--who dropped more than 35 pounds in the past year--hits the gym hard, and she relies on some of her sisters more than others when it comes to seeking a good workout buddy.

"Some of my sisters are more motivating than others," Khloe confessed.

"If you follow me on Snapchat, then you probably already know that Kourtney [Kardashian] is my main bitch when it comes to exercise partners," said the "Keeping Up with the Kardashians" star. "She'll try everything and do her best without complaining."

Indeed, the dedicated duo are often seen working out together on her social media feeds and on their reality show but Khloe admits she originally resisted working out with Kourt because she "thought she'd always be a pussy."

Not so prominent on Khloe's workout posts is Kendall Jenner, but the blonde beauty revealed the supermodel is "a really good fitness partner because she's super athletic."

"She has her dad [Caitlyn Jenner]'s body so it doesn't take a lot for her to get in shape. She doesn't do a ton of cardio but she does weights," she continued. "Kenny's also really quiet when she works out, which is funny."

Not so quiet, apparently, is Kris Jenner, who Khloe described as making a "crazy sound when she's exercising."

"She's a grunter--and a moaner, too," she elaborated. "It's so uncomfortable and just weird. Kourtney and I always die laughing."

But the 61-year old momager isn't the only member of the clan with what Khloe deems an unusual workout habit. While her older sister Kim Kardashian successfully dropped all of her baby weight following the birth of her second child, Khloe is less than impressed with the reality star's approach to staying in shape.

"Kim has the best body but she doesn't work out a lot, so it's just like a half-ass weird thing when we're exercising together," she says. "We'll literally both be on treadmills and I'm sprinting and she's texting next to me. Also she doesn't sweat, she just glistens!"

Like Kim, Kylie Jenner also doesn't work up a sweat, because according to Khloe, she "doesn't really work out."

The makeup maven tried out her older sister's fitness routine but it wasn't really for her.

"She did come with Kourt and me one time, when [our personal trainer] Don was training us," Khloe explains. "Don does four quarters in each session and Kylie only stayed for one quarter."

What do you think of the Kardashian-Jenners' workout habits? Sound off in the comments!