Grab some tissues – Ellen DeGeneres paid major tribute to Barack and Michelle Obama Thursday as the final hours of his presidency draw near.

“I want to personally thank him for changing my life,” she said on “The Ellen DeGeneres Show”.

“I am a legally married woman because of him, and so is my wife. His courage and compassion created equality for everyone. He moved us forward and made more happen in the past eight years than I ever dreamed possible. I love him. I love Michelle. Here's a little bit of time we've spent together over the years.”

The talk show host's reel features countless moments she shared with the First Family, starting with Barack's appearance from Oct. 29, 2007, when he was on the cusp of making history as the first African-American POTUS.

First Lady Michelle Obama has also appeared on "Ellen" numerous times and even co-hosted the show.

“Your husband's a good dancer, but you're a better dancer,” Ellen said jokingly.

“I know! That's what I've been tellin' him!” Michelle joked back.

Barack even breaks into dance a time or two during his appearances on “Ellen,” – from his meeting with Cuba's late Fidel Castro to breaking it down in the Oval Office with a disco ball.

“When I see you [and Barack] together, you seem very loving and very close,” Ellen said to Michelle during one of their sit-downs.

“Laughter is huge, and I think you have that down,” Michelle responded. “And mutual respect. He's always had my back.” 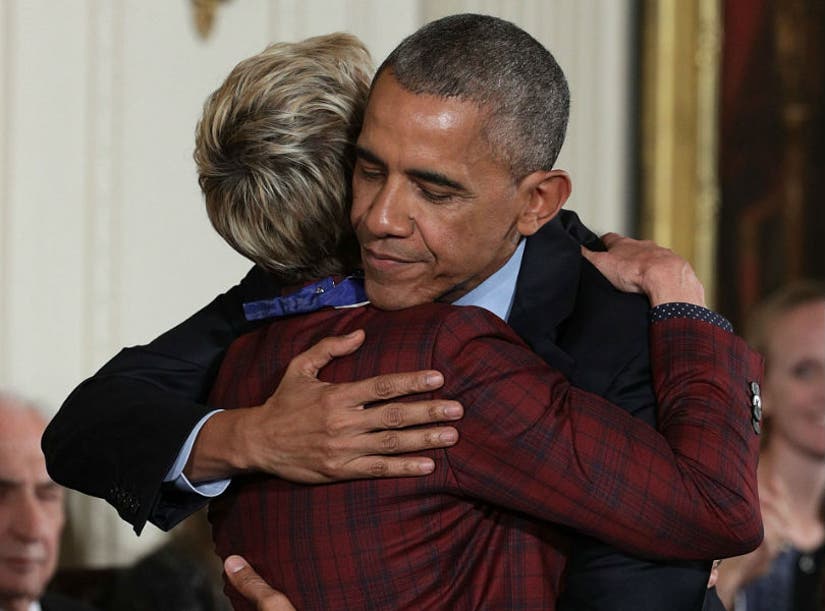 Looks like the feeling is mutual; Barack Obama presented a tearful Ellen with the Presidential Medal of Freedom back in November.

And during Barack's last appearance on her show as president, he told Ellen: “Changing hearts and minds – I don't think anybody's been more influential than you have. Attitudes shift, and the laws followed, but it started with folks like you. And now – after having served for seven years and having gotten a lot done and seen the progress that we've made and seen the incredible resilience of the American people – I feel confident that America's gonna do well. I'm just as enthusiastic as I was the first day I started.”