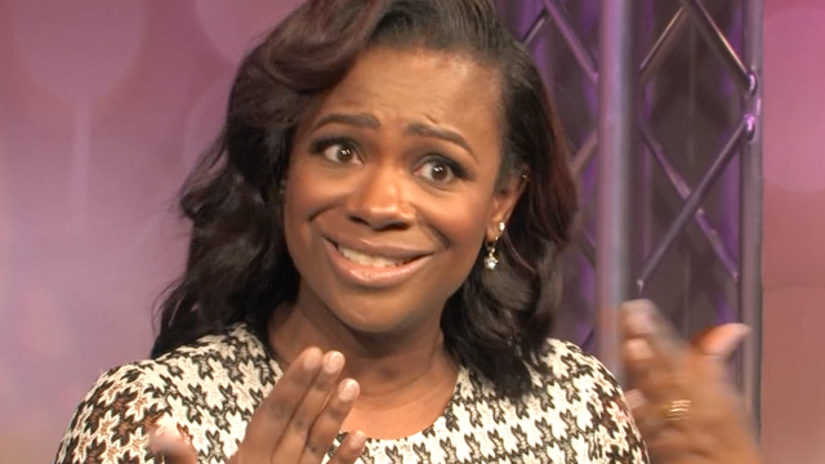 "Real Housewives of Atlanta" star Kandi Burruss is not sitting quietly when it comes to Donald Trump and, according to her, neither should the rest of his detractors.

The reality TV star recently shared a clip of Ashley Judd's passionate speech from the Women's March in Washington DC on her Instagram page, captioning the video, "Can I just say that I love #AshleyJudd! There's no stopping women when we stand together!' When Burruss stopped by our studios for a chat with TooFab's Brian Particelli, the Hillary Clinton supporter expanded on her thoughts about the new POTUS.

"First of all, I feel like Trump has to stay off Twitter. Please stop," she pleaded. "It's like, can you take a minute to think, think things through?"

"I did vote for Hillary, but at the same time, I realize some people in America just didn't see it my way," she continued. "In some kind of way, they made him president and this is what we're gonna have to deal with. I'm hoping that we can find a way to speak up for ourselves and to get him not to go so hard with some of these decisions that he's making and that's the only thing I can really say."

The decision that bothered her the most so far: Trump signing an executive order banning foreign aid or federal funding for international organizations that provide abortions or even information about getting one.

"I'm definitely pro-choice, I was very upset when one of those executive orders ... I was highly upset about it," Burruss explained. "I'm hoping that we can find a way to speak up for ourselves and to get him not to go so hard with some of these."

Kandi's advice to those who oppose Trump: speak up.

"We can't let it go. I think sometimes we get so hyped about things and then the next thing you know, you don't hear about it anymore," she said. "We can't let it go, we have to fight more at a local level, in our local city and state governments to try and push our agendas as much as we can to stop some of the things that he's doing. All we can do is continue to push, until the next four years pass and then we can do something then."