The ultra-conservative Tomi Lahren survived her very first appearance on "The View."

Whoopi Goldberg was MIA from Friday's live episode, the host of "The Blaze" joined the Hot Topics table for a conversation about Donald Trump's travel ban, investigations into both wiretapping claims and the administrations' ties to Russia and the president's treatment of women.

Lahren told the women she thinks her videos are so popular online because she "represents Middle America."

"You've got the two coasts and they just seem to talk to each other. Middle America is dying for a voice," she explained. "They watch me and say she speaks like I do, thinks like I do and seems to get it like I do. There's not a lot of young conservative women out there and I provide that." 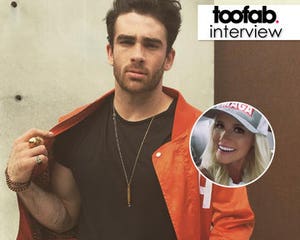 "This isn't a Muslim ban. Unless all the Muslims in the world have been able to pack themselves into six countries, it's not a Muslim ban," she said.

When Joy Behar asked if it bothers her the ban doesn't include Saudi Arabia, "where he has a business," the two actually agreed on something. " I definitely think Saudi Arabia should be in there," she added. 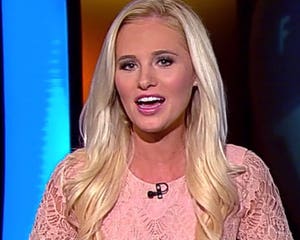 Tomi Lahren Rips 'A Day Without a Woman' Protest

On investigations into ties to Russia and president's wiretapping claim:

When Jedediah Bila said there's "a big distinction between those two investigations," because there's "no evidence" of Trump's wiretapping claims, but there was communication between Russia and several people in Trump's administration.

"It costs money. I want some reason, otherwise I don't want taxpayers on the line for it," added Bila.

Tomi defended Trump against Joy Behar saying he "treats women so poorly," as the co-host cited the "Access Hollywood" tape and his comments about Megyn Kelly and Alicia Machado.

"If we go back to the campaign, which is when most of these things took place, I look at the things now president Trump said and the things Hillary clinton did and I had to weight them. She stayed married to Bill Clinton, so is she giving him get a pass then?"

This whole 'Trump is anti-woman thing,' I just don't buy it. if he's so anti woman, why did he select a female to run his campaign. If Kellyanne Conway had been a democrat, you at this table would have been applauding her, singing her praises.

"That's like saying all my best friends are Jewish and being an anti-semite," Joy clapped back.

Tomi also defended her pro-choice stance. "I'm for limited government, stay out of my guns and stay out of my body as well," she said. "I get a lot of attacks from conservative women as well. Equal hate from all sides for me!"

Viewers of the show sounded off on Tomi's appearance as it aired -- see their reactions below:

When I saw Tomi Lahren is a guest on #TheView. pic.twitter.com/QIegcBfEzg

@zenstella @TheView @TomiLahren Tomi is worse than KellyAnn, because #45 pays KellyAnn to be an ass - Tomi volunteers her services as one.

Has Tomi seen then sausage fest that is Trump's cabinet? You can count women on on hand minus some fingers #TheView

I wish people would stop giving egregious ignorance a platform. I know it's intriguing because it's so shocking, but stop. #TheView #Tomi

You want #honesty?
Tomi is getting paid three figures for purposefully being ignorant about everything.#TheView

#TheView
Tomi Lahren chokes because she is a tv face reading a script. I can't take media serious.
Don't expect substance from speculation

#TheView I love for light fixtures to fall from the ceiling on Paula & Tomi's heads....Do it lord! pic.twitter.com/GhywFlToo4

@TheView @TomiLahren Way to go Tomi - use Obama as the go to for blame like all u weak minded Reps. - he's your crutch -GROW UP #THEVIEW

Tomi is on the view and it's on the day Whoopie isn't here......she got saved

She had some supporters as well:

@TheView @TomiLahren Ever see so many sh eating we want to kill you grins. Sheep. Go Tomi !

@TheView @TomiLahren to have to listen to Joy Baher, now that's painful. Tomi is the only reason I tuned in today.

@AKpoliviewlaugh @TomiLahren ya, even with beloved #redeye great jedediah bila, 'the view' is unwatchable. watched for tomi today.

@TheView @TomiLahren Tomi after being on that show I'm sure you feel like you need to shower!!

@TheView @TomiLahren Tomi is great. I only watched because of her. I can't stand the other hoes.