It was all against one on "The View" this morning, as the co-hosts debated the right for college students to carry handguns to class.

On Tuesday, a Texas state law allowing licensed gun owners to carry concealed handguns on university grounds was expanded to community colleges. While Jedediah Bila supported the move, the rest of the table just couldn't agree with her.

"I'm not a gun owner and when you see these shootings, a lot of these lunatics target gun free zones," Bila said, citing the Aurora shooting in her explanation. "You see it all the time, there's stats upon stats. I want those students who have a license to carry to not be sitting ducks." 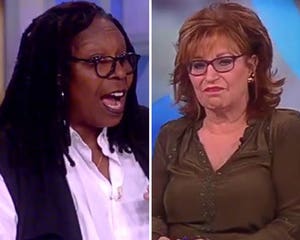 "You do know to get a gun license, you don't have to learn how to shoot the gun," Whoopi Goldberg responded. "I'm telling you, people can go buy guns and never have to go to a gun range."

Joy Behar then said that "statistically, you are more likely to kill another civilian or yourself with a gun," adding, "This is part of the insanity that's going on in this country."

She then joked: "What about the professors who give you an F, I'd be scared to teach in that class."

Speaking more about the Aurora shooting specifically, Sara Haines added, "The last thing you need in a dark theater with adrenaline pumping is a bunch of people popping up armed, because when someone comes to save the day, who are they going to shoot at?"

Bila ended her argument by saying "the gun is not the problem" before Goldberg said they'd pick up the discussion after the break. They didn't.