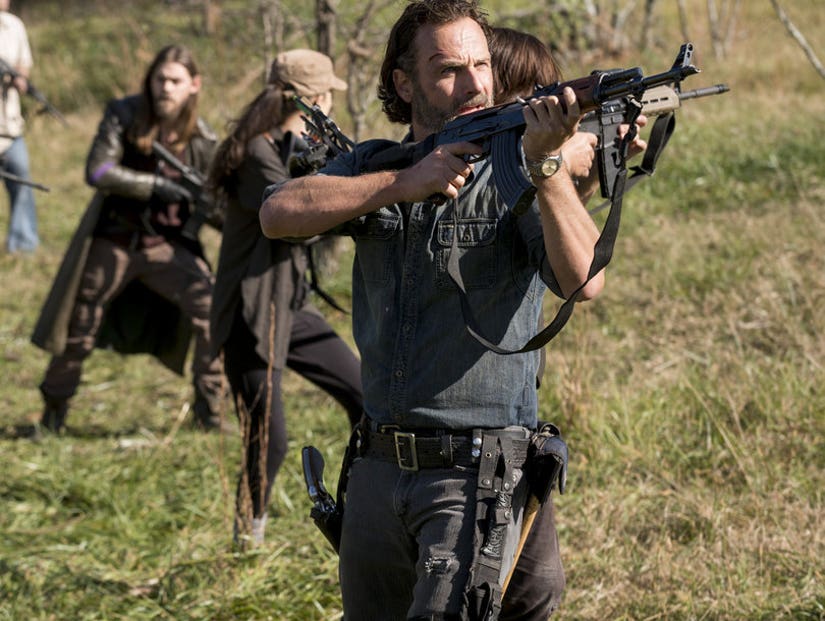 After a season of "All Out War" on "The Walking Dead," the battle between Negan and Rick came to an end on Sunday night's big finale. And while one of them fell, there was a surprising lack of bloodshed in the final showdown.

The episode wrapped up with new alliances formed and some shocking new battle lines drawn from within Rick's own ranks, something that should set up an interesting season when the show returns in the fall.

Here's everything we need to talk about from "Wrath." 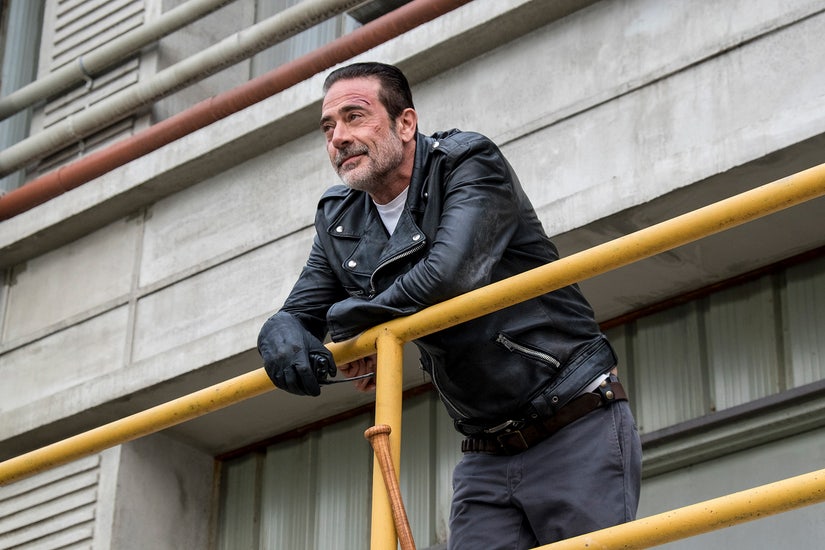 The Big Bad thought he had Team Rick backed into a corner, after he "ambushed [Rick's] ambush with an even bigger ambush." With fully loaded guns thanks to Eugene and the element of surprise, Negan thought they were done for. One problem: Eugene decided to sabotage the Saviors by making bullets that would backfire instead.

After the Saviors lined up to attack Team Rick, they fired and instantly fell to the ground. Negan even lost a chunk of his hand by pulling the trigger on his gun. With no weapons, his goons were screwed and surrendered pretty quickly.

While all this was happening, Negan also thought another group of Saviors would be able to take over the Hilltop, which was left somewhat unguarded. Wrong again! Just as that band of bad guys was about to attack, Aaron and the women of Oceanside showed up and started hurling molotov cocktails their way. The Oceanside storyline sure had a lot of buildup for what amounted to about 30 seconds of payoff, but it was still pretty satisfying to watch.

Also satisfying to see: Rosita punching Eugene for vomiting on her in the previous episode. 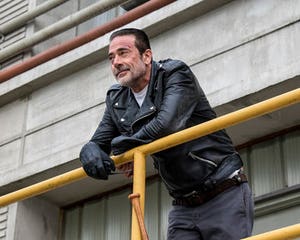 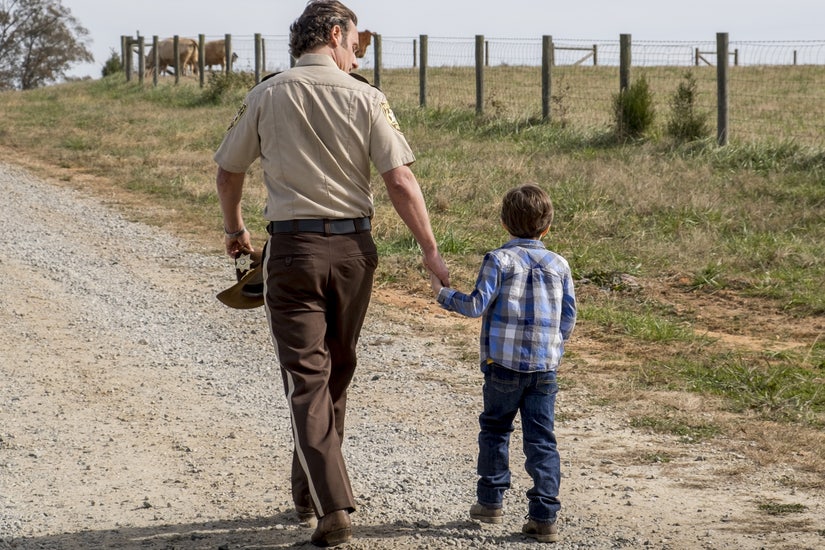 Everything came down to the final battle between Rick and Negan, with Rick making one last plea for his adversary to find a way to move forward without fighting. When that didn't work, Rick straight up slashed Negan's throat with a piece of glass. It sure looked like that was going to be the end of the leather-wearing baddie, but at the last second Rick called for Siddiq and told him to "save him."

He then told the surviving Saviors, "We're all gonna go home now. Negan's alive, but his way of doing things is over. And anyone who can't live with that will pay the price, I promise you that." He told them their enemy shouldn't be each other, but that giant horde of walkers headed their way. "They're coming for us, unless we stand together," he said.

Later, Rick and Michonne make it clear to Negan that he'll spend the rest of his life rotting in jail for what he's done. "You're gonna be evidence that we're making a civilization," he explained, with Michonne adding, "You get to watch it happen and see how wrong you were." Welcome back to society, criminal justice system!

In the end, Rick wrote Carl a letter of his own, thanking his son for bringing "all of us to the new world." 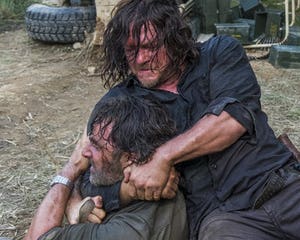 Maggie's Out for Blood 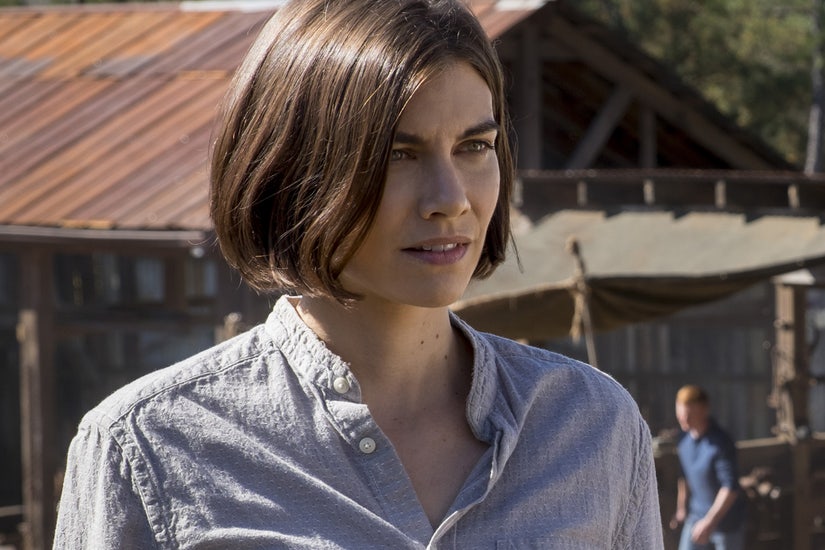 While Rick may think everything will be just dandy with Jeffrey Dean Morgan's villain in jail, a few of his best friends have something else in mind.

After he spared Negan, Maggie had a breakdown. "No, he killed Glenn! We have to end it. We have to make it right!" she screamed through tears. Later, back at the Hilltop, she had a meeting with Jesus and Daryl, where they essentially formed an anti-Rick alliance.

Saying he was wrong about Negan, she added, "We have to build this place up, make it work better than before. Make it thrive for the people who live here. We need our strength, the ability to defend ourselves better. But Rick and Michonne, Rick was wrong to do what he did. Michonne too. So we're gonna bide our time, wait for our moment and then we're gonna show him." The two boys agreed with her.

Though Rick won't like this, fans of the show can at least rest happy knowing this new development likely means Lauren Cohan will be back for Season 9, with a pretty meaty storyline to boot. We weren't ready to see Maggie go just yet! 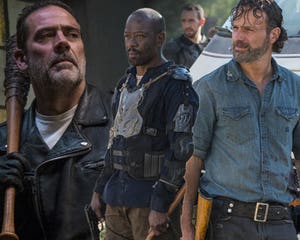 Though it was clear to everyone that Dwight didn't voluntarily lead the survivors into Negan's trap, not all of them were ready to fully forgive him for past transgressions. Daryl didn't want him hanging around Hilltop, driving him out to the middle of the woods for a heart to heart.

Dwight thought he was a goner after killing Denise and mistreating Daryl at the Sanctuary, and was ready to accept the consequences -- even death -- for what he'd done. Daryl instead showed some mercy, throwing keys at him and telling him to get the hell out of town. "Never come back here again," he told him. "You go out there and you make it right. Find her."

"Her," of course, was Dwight's wife Sherry. He went back to their old meeting spot where he found another letter from her with with the word "Honeymoon" on it and an infinity symbol. Considering he almost certainly knows what and where that is referring to, what will he do once they find each other? Will Austin Amelio be back or is this the end of Dwight's run on the show? The character is still very much around in the comics. 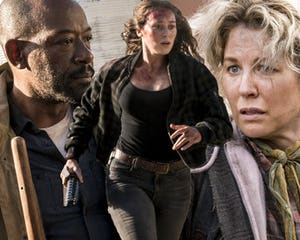 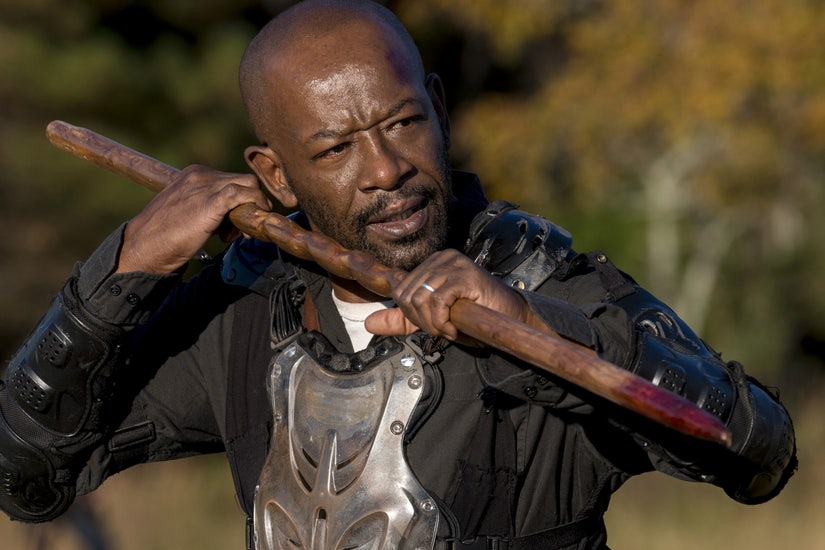 We all knew this one was coming, as Lennie James has jumped over to "Fear the Walking Dead," but now we know why he left.

After nearly killing Henry with his bo staff and seeing visions of Jared, it was clear he was a danger to those around him, those he truly cared about. He stuck around long enough to help in the final battle, where Jesus talked him into not using the sharp end of his stick on humans. He then told Carol it was time for him to go.

He's last seen talking to Jadis -- or should we call her Anne now? -- at the junkyard, convincing her to go to Hilltop and work with Rick. "He wants to show people that things can change," he explained, "Everything is about people, everything in this life that's worth a damn." 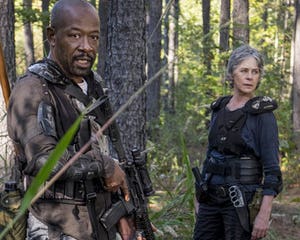 That's a wrap on recapping Season 8. See you in the fall for Season -- and sound off with your thoughts on the finale below!