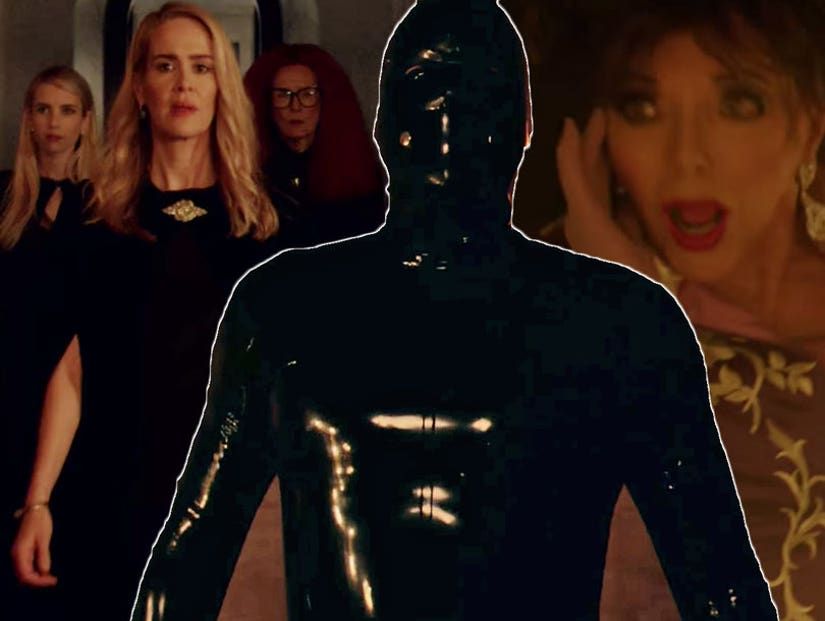 Rubber Man, the witches of Miss Robichaux's Academy for Exceptional Young Ladies and the one and only Joan Collins are reporting for duty in the first trailer for "American Horror Story: Apocalypse."

Throw the literal anti-christ into the mix, and you've got a party. 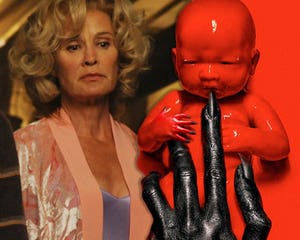 After teasing the show with their moody, oh-so-creepy promos, FX released a sneak peek packed with actual show footage on Wednesday, giving fans a look at the highly-anticipated crossover season. This time around, characters from both Season One, "Murder House," and Season Three, "Coven," will collide as the world falls apart around them.

"The story begins with the end of the world, and then our world begins," one of the shows EPs revealed at the TCAs. "It starts in the real world. It's very tangible."

The trailer teases some of that apocalyptic destruction, as Billy Eichner and Leslie Grossman try to escape Santa Monica after sirens start ringing out. Then, an explosion, before we see the aftermath of what appears to be nuclear fallout.

The trailer introduces Paulson's new character, Venerable, who welcomes some survivors to a shelter called Outpost 3. "The house rules are simple, you may never leave the building due to the danger of radiation contamination and no unauthorized copulation," she warns. "No exceptions."

Alongside Venerable are Grossman, Collins and Evan Peters, who all apparently survived the explosion and got some wild makeovers in the process. Paulson's Coven alter-ego, Cordelia, also arrives on the scene with fellow witches Madison Montgomery (Emma Roberts) and Myrtle Snow (Frances Conroy), while Misty Day (Lily Rabe) also makes a cameo.

While they don't appear in the promo, Connie Britton, Taissa Farmiga, Dylan McDermott, Gabourey Sidibe, Stevie Nicks, Cheyenne Jackson and Adina Porter are all expected to make appearances through the season as well.

Watch the wild trailer above -- "Apocalypse" premieres September 12 on FX.