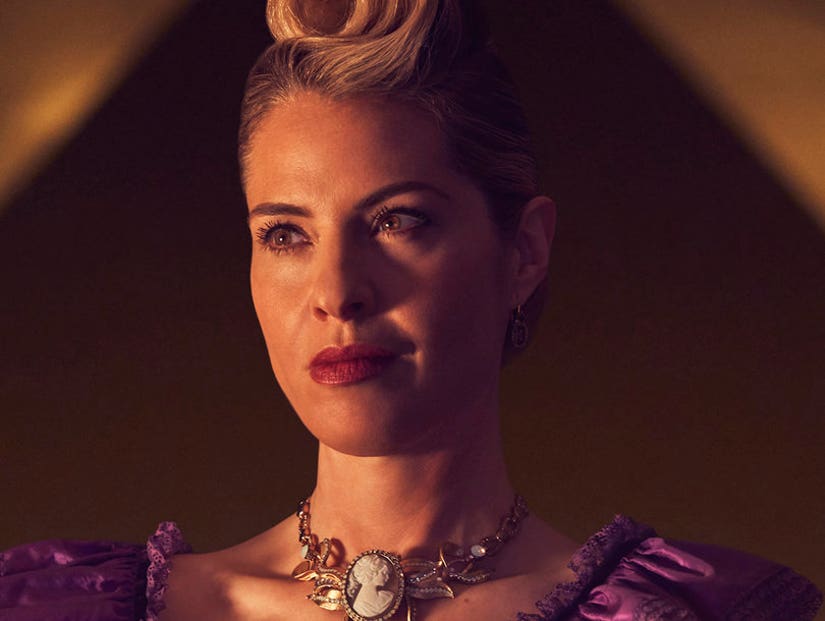 Ryan Murphy packs this finale with answers to almost every one of our burning questions, plus a few last-minute surprises.

"Apocalypse" may have been Ryan Murphy's most ambitious season of "American Horror Story" yet, and yet he totally stuck the landing with this jam-packed finale. Well, almost. 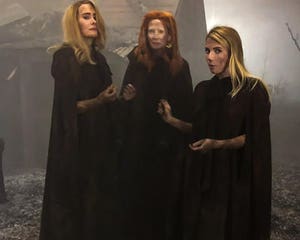 And finally we returned to the post-apocalyptic wasteland we last saw a good hundred or so episodes ago (it seems), picking up right where things left off with Cordelia (Sarah Paulson), Myrtle (Frances Conroy) and Madison (Emma Roberts) reviving Mallory (Billie Lourd), Coco (Leslie Grossman) and Dinah (Adina Porter) in Outpost 3. But that's where the fun really began, as Murphy had one more surprise guest star to drop on us.

See, Dinah isn't the first Voodoo Queen we've had the pleasure of spending some time with, and the previous one was a much bigger badass. Oh, we can't begin to explain our excitement when Marie Laveau (Angela Bassett) sashayed through the bunker to confront Dinah.

It turns out we weren't quite done with Papa Legba (Lance Reddick) yet, as he agreed to a soul swap between the not-so-bad Marie for the bad-to-the-bone Dinah. This one would be much better to torture Delphine LaLaurie -- another return appearance by Kathy Bates in her first "AHS" role.

Granted, Marie didn't end up slowing Michael down much, nor did Madison and Coco. And yet, it was just enough to set up the big climactic confrontation between Cordelia and Michael. Now that was a beautifully presented scene, even though we all knew exactly what was going to have to happen weeks ago.

All season long we've been reminded that the new Supreme can't rise into her full power until the old one is dead, and yet there's Cordelia, still kicking around. They didn't even necessarily need to have Brock (Billy Eichner) come out of nowhere -- apparently, he's been hiding in the complex this whole time -- and stab Mallory in the gut to weaken her.

Don't get us wrong, we appreciate Ryan Murphy tying up that dangling plot thread, but that seemed to be the primary reason for it, and to make Cordelia's sacrifice even more dramatic.

And that moment was simply fantastic. Paulson is divine in almost everything, and Michael's dull-witted reactions to everything going on were in perfect service to his whiny and dense characterization all season. He's all id. In fact, his weaknesses as a human are perhaps why things played out the way they did in that killer twist ending.

But it wouldn't be a season of "American Horror Story" if we didn't walk away from it with some issues and questions. At least now we know that future installments might address them. It's all connected, man! 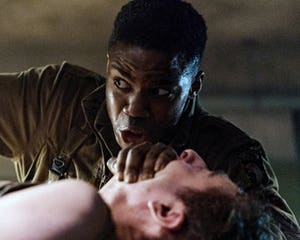 That Was Enough to Kill the Antichrist?

Honestly, we think Mallory's first trip in the past as a test was way too hard as she was dropped into an impossible situation with seconds to change history. This time, she apparently dropped back to a tranquil period with enough time to secure a car and track down Michael.

But seriously, running him over a few times was enough to kill him? It probably helped that he was emotionally weakened after Constance (happy to have you back, Jessica Lange) threw him out of the house, but that was it?

And how irresponsible of Mallory to just drive off without making sure the job was done and Michael was dead. In fact, we almost faced the real possibility that Constance would drag him to the Murder House and he'd live on as a ghost there.

With everything at stake, you'd think Mallory would stick around to make sure the deed was done. Maybe use some magic in his final moments to really makes sure he stayed dead. 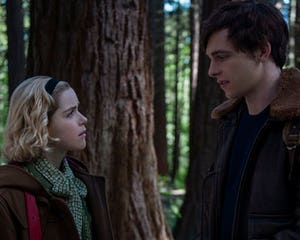 Are There Two Mallorys Now?

Once reality was reset, Mallory said that she remembered everything, showing up at Robichaux's Academy as the badass witch she became through the original run. So is she in her original body with all of her memories from before she reset time? It wouldn't seem so.

After all, she was physically present in her trial run in the deep past, so we can assume she is physically present as well in the near past. That would mean that her original self is also running around as a burgeoning witch, only this Mallory totally took her spot at Robichaux's. What does that mean for her other self?

We doubt she killed her, so this just feels like a plot element that wasn't fully thought through. This Mallory is now a witch out of time so it would make more sense for her to step back from the world or otherwise assume another identity.

Another possibility is that future Mallory disappeared as soon as the future was undone, but somehow all of her memories downloaded into her past self. There's no real reason that should happen, but we're trying to help here. You're welcome! 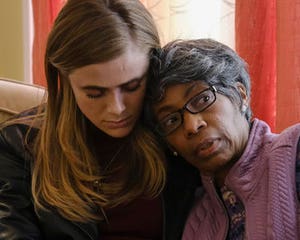 What Was Up With the Rubber Man?

So how and why did the Rubber Man show up in the bunker in those early episodes? If Tate (Evan Peters) was "cured" of his madness by the birth of Langdon, than he probably wouldn't have been in the suit this time -- not to mention that whole being trapped in Murder House thing.

It also appears as if it wasn't Michael, or perhaps it was just a manifestation Michael created and gave physical form. But why? Was he just messing with everyone in the houses by encouraging Gallant (Peters) to break Venable's (Paulson) rules and then kill his grandmother (Joan Collins)?

We've seen Michael be cruel, but we've never really seen him toy with people in this way. For one, that takes a cleverness that he totally lacks. He is a blunt instrument of emotion. Stunted through his rapid aging (hello trope) he is a man-child who only acts out. He doesn't orchestrate things.

Hell, he needed Mutt (Eichner) and Jeff (Evans) to step in and show him how to bring about the apocalypse. Everything that went down was their plan. He's just not clever enough to pull off these kinds of games, nor does it fit his personality. He'd just as soon kill someone and be done with it, as he did with ... well everyone he encountered, just about.

What Was the Point of Emily and Timothy?

While we're still not entirely sure the point of Emily (Ash Santos) and Timothy (Kyle Allen) in the bunker, it seems it was all to set up their role in the future. They were established to be genetically perfect, but that wasn't for the future of the human race, it was for the future apocalypse.

While they were throwaway characters in the main narrative, their role in the future couldn't be more important, as we learned when their future child murdered his babysitter just as Anton LaVey (himself) and Ms. Mead (Bates) showed up at their doorstep.

Mallory made it clear that while no one on Earth knows about the apocalypse she retroactively erased, the demons in heaven do. That would be enough for Satan to perhaps reconsider his next emissary to man's world. Clearly fathering a child in the Murder House brought him someone who was weak, confused and a little slow on the uptake.

Now, he's got a genetically superior couple creating the new Antichrist. This could prove to be an even bigger problem for the future of humanity, and that's just the kind of twist you want to dump on a horror audience. Yeah, they beat this one but the next challenge is going to be way worse.

Looks like we may get that "Apocalypse 2" after all, though we might have to wait a couple of decades for it. 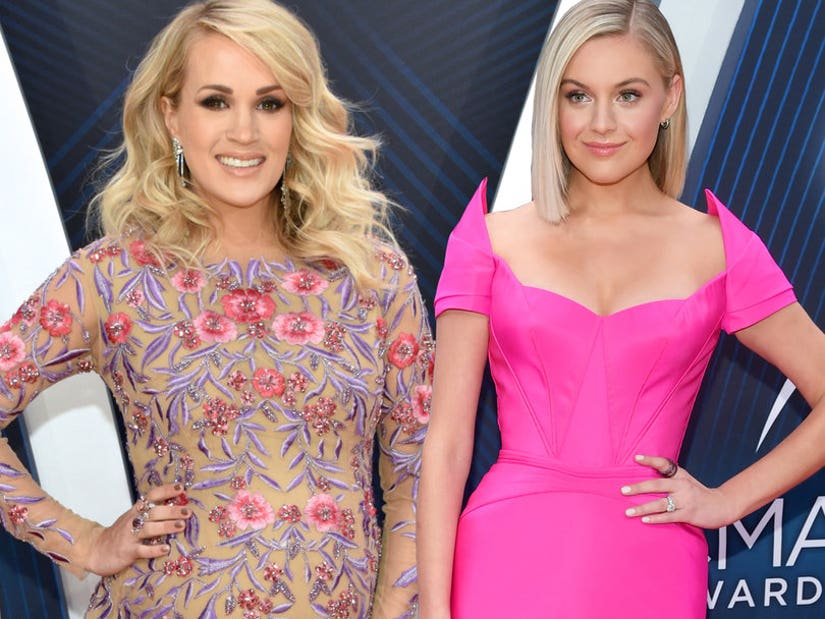