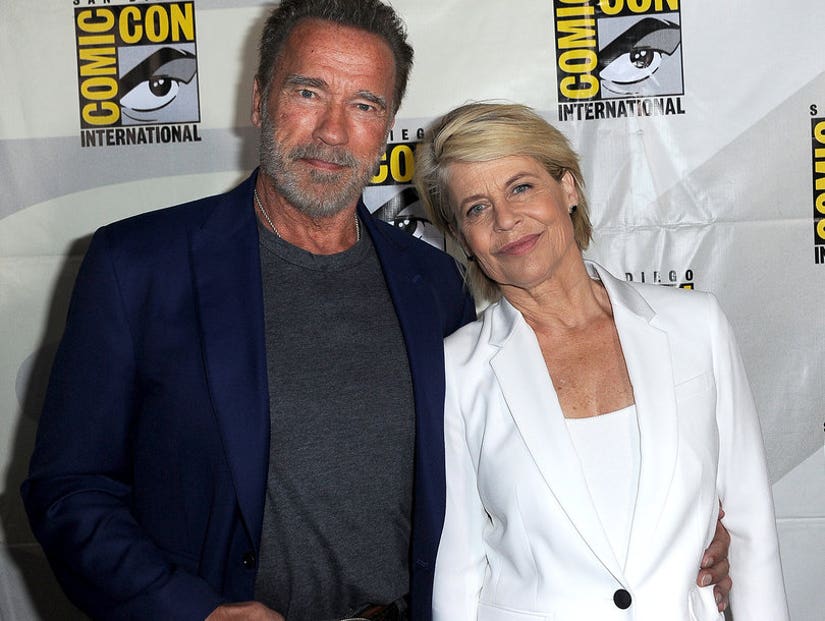 Sarah Connor and the titular cyborg are back. And we are so ready.

Linda Hamilton and Arnold Schwarzenegger kicked off Comic-Con in epic fashion on Thursday, with one of the first big panels of the weekend for "Terminator: Dark Fate."

The latest installment reunites the stars with James Cameron, who directed the first two films and produces this time around. The new flick was directed by Tim Miller ("Deadpool") and costars Mackenzie Davis, Natalia Reyes, Gabriel Luna, and Diego Boneta -- who were all on hand for the presentation.

While Cameron was too busy filming the next 800 "Avatar" movies to make it to San Diego in person, he appeared live with a message for everyone in the audience. Though Arnold has appeared in every film in the franchise, either in-person or via CGI (as was the case in "Salvation"), Cameron promised the latest iteration of the titular cyborg is unlike anything we've seen before.

He then threw a little shade at Lena Headey and Emilia Clarke by saying "there is no Sarah [Connor] without Linda," revealing he sent his ex-wife a very lengthy e-mail laying out all the pros and cons of having her return. The biggest pro of them all: "People love you in this character."

James also confirmed that Edward Furlong would also return -- somehow -- as John Connor. He was not seen in any of the footage screened, though Reyes made it seem like the identity of her dad was a spoiler, so maybe that's how he'll fit in? 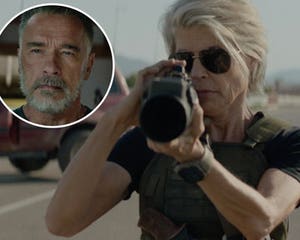 Both Hamilton and Miller said they were most interested to see the ramifications of stopping judgement day in "T2" and figuring out what that would mean for Connor now. Linda, 62, also said she returned to the character so she could "rock it as a woman of a certain age," adding that she "worked really hard" on her physique and diet for a good year to "get trim and as far into character as I could, physically."

But, she also noted, "I am so much more than I was," thanks to her life experiences in the years since the second movie.

Judging by some of the clips shown to the crowd -- many of which haven't been seen in trailers yet -- she definitely kicks ass. We see her use multiple guns, grenade launcher and hand grenade to take out some evil bots, proclaims she "hunts" Terminators now, cooly throws out the line "I'll be right back" and drops what has to be one of the movie's best f-bombs.

Linda's presence in the film was clearly important to all involved, though Reyes was particularly moved by having her around. Speaking about working with Hamilton, she got emotional and wiped away tears speaking about how lovely the actress is as a person and how important the character of Sarah Connor is to young women everywhere. She added, "I want to be just like you when I'm your age ... I cannot be more inspired."

Arnold just made an easy $20 because of all the times Tim Miller said “fuck” before he came out on stage. “Tim loves talking about it, I like doing it.” pic.twitter.com/4TvbaFx7S7

Of course, it wasn't all about Linda, as Arnold also hit the stage -- the last in the cast to do so. Right off the bat, he was in a jovial mood, winning $20 in a bet about how many times their director would drop the f-bomb before he came out. "Tim loves talking about it, I like doing it," he joked.He then took a dig at the president when asked where he'd spend his winnings, joking that the choices were endless because 'the economy is doing so well under Donald Trump." Schwarzenegger then went on to thank Cameron for creating this character, one who has made him one of the most popular villains and most popular heroes in pop culture history. As for how Arnold fits into the new movie, he's still playing a cyborg fighting alongside the humans. His name: Carl. "I'm never gonna fucking call you Carl," deadpans Sarah in the preview we saw. It's unclear whether he has any idea who Sarah is or if he has any of the previous terminator's memories, but he definitely puts up a fight against Luna's new model. And if that wasn't enough, the panel ended with another big surprise from Paramount: Tom Cruise and the first trailer for "Top Gun: Maverick." Watch that below -- "Terminator: Dark Fate" hits theaters November 1, 2019. 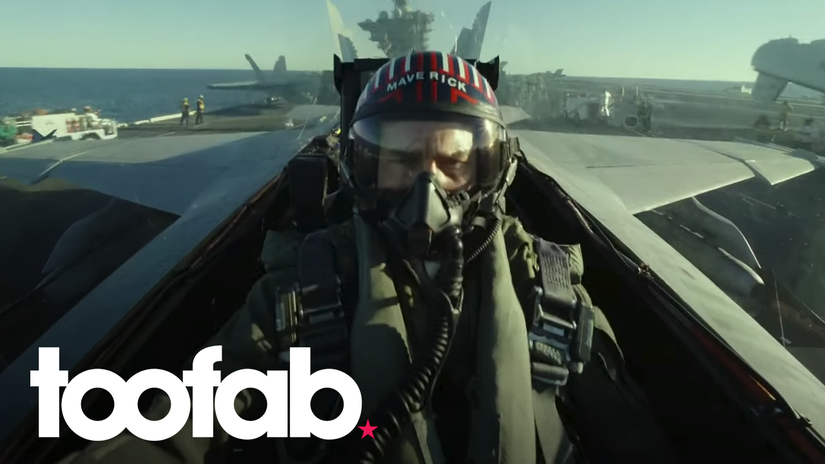