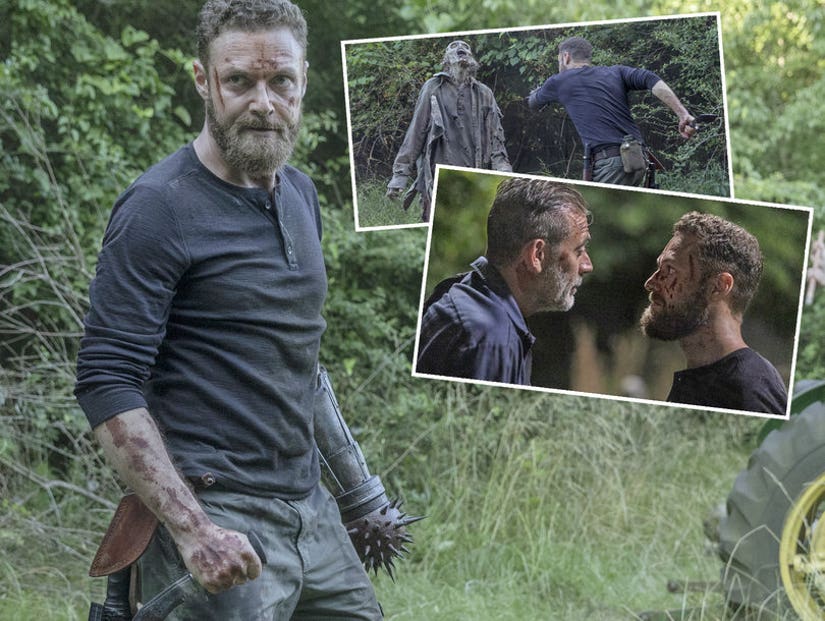 Danai Gurira is exiting 'The Walking Dead' this season and that could impact Marquad's character greatly.

Negan came one step closer to redemption tonight, after he and Aaron arrived at an unlikely understanding. But the man behind Aaron, actor Ross Marquand, told TooFab the two aren't suddenly best buds. 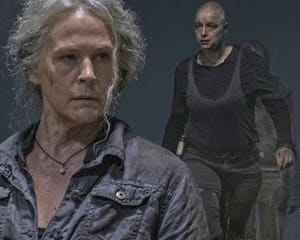 After Aaron begrudgingly recruited Negan to help fight off wave after wave of walker coming toward Alexandria, the two got into a heated confrontation over the death of Eric, who was killed by a Savior. As the fight escalated, a walker covered in a toxic plant interrupted the argument, attacked Aaron and gave Negan a window to escape.

Temporarily blinded by the hogweed growing on the zombie, Aaron was in dire need of assistance -- which Negan eventually provided, saving his life at the last second. Keep reading to see what Marquand told us about where the two characters stand now, at least in Aaron's eyes.

During TooFab's conversation with the actor, he also opened up about how Aaron's role could change when Danai Gurira -- and, in turn, her character Michonne -- exit the show later this season. According to Marquand, expect him to take even more of a leadership role.

How does it feel for you to play a more badass version of the character this season?

I love it, and I think it was a long time coming. I think it made sense that it took as long as it did, because he's always been such a sweet, diplomatic, nice guy. I think the gloves finally came off last year. I think with the loss of Eric and Jesus and Tara and Enid, everyone he's loved over the years, to lose his friends in such a senseless and violent way in so many cases, I think his nice guy demeanor has been tested to the limit and now, he's just a man of action. And I love that, because I think everyone has their breaking point and I think while Aaron would love to maintain the diplomacy he's had for so many years, he's realizing now that that just won't work anymore. And the only way to reason with [the Whisperers], if you want to call it that, is to meet them head-on with violence.

As an actor, is it more interesting to tap into this side?

I think so. I mean, I love playing both aspects of Aaron, but truly there's something fun about tapping into the darkness of Aaron because he's been such a kind and forgiving character all these years that I was looking forward to playing a pretty different aspect of him that would be more edgy, I suppose? A little more sharp in terms of purpose and drive. So, I think it's wonderful, I'm very excited to see this side of him come out.

We get to see you put mace arm into action even more, just bashing Walker heads-- has that been fun to play around with?

Oh, it's been a blast. The practical and special effects crew is just incredible. They've really done such a good job of creating these fantastical worlds and making them believable. I'm really honored that they took so much time to develop these weapons for us, specifically the mace. I'm excited to see the fans' reaction, because I really think it's going to go down as one of the better scenes of the entire run.

Tonight, we see the evolution of the relationship with Negan. Obviously, it starts out thorny, but the two characters kind of come to an understanding at the end. Can you talk about how that relationship might evolve?

Yeah, I think it's an understanding, but not much more than that. I think he's still very aware that Negan is the same man who killed many of his friends, unnecessarily so, and just ensnared all of these people into this very horribly violent Ponzi scheme almost. He's been a nefarious character the entire time he's known him. One good deed does not reverse all of the terrible things he's done, and it's going to take a lot more than killing a few walkers to save Aaron to have him change his mind.

And now, having all that time with Jeffrey Dean Morgan, it seems everyone who's worked with him has had a great time. How was that for you?

It was great, because he brings so much to the character. He brings so much calculated charm to that character and I love watching him turn the screw in the scene with how he uses language to really mess with you. It's been a real joy to work with him.

Can we get Aaron a new boyfriend? We were disappointed that Jesus never worked out, being a fan of the comics.

I feel like that's what a lot of people would like to see, including myself. But the biggest problem is that love is kind of taking a backseat right now on the show. It's not really the priority. They're just like, 'Well, love is important, but ...' Let's not discourage love, but at this stage in the game there's so many threats that I just don't think that's a priority.

What can you tease about Aaron's arc going forward from here?

Well, I think he's going to take on an even stronger leadership position. I think his goal, especially in the wake of everything that we've seen so far with the satellite, and now we've got a pending threat from the Whisperers, he's realizing that the action is going to ramp up and he really needs to step into that role as the militia leader and be the military adviser that we need him to be. He needs to really step up and be a character that not only advises but also leads troops into battle against this incredibly large horde that Alpha's constructed. If I could boil it down to a word, I'd say much more proactive.

It seems like Aaron and Michonne have become really trusted confidantes. With Danai's exit later this season, how is that going to shake things up? Is that going to make him step even more into a leadership?

I think that's going to make him step into it more. That void is going to instill in him a sense of duty, even more-so than she already has. Whenever her exit is in this year's run, I think it's going to make him want to fight even harder for what she stood for, what those communities have always stood for. That's the reason why he brought them to Alexandria in Season 5, he saw them as great leaders and great people. He wants to continue that belief that Alexandria and places like it can thrive and rebuild society.

Are we going to see more of the father side of him? People really liked those peeks into that relationship. 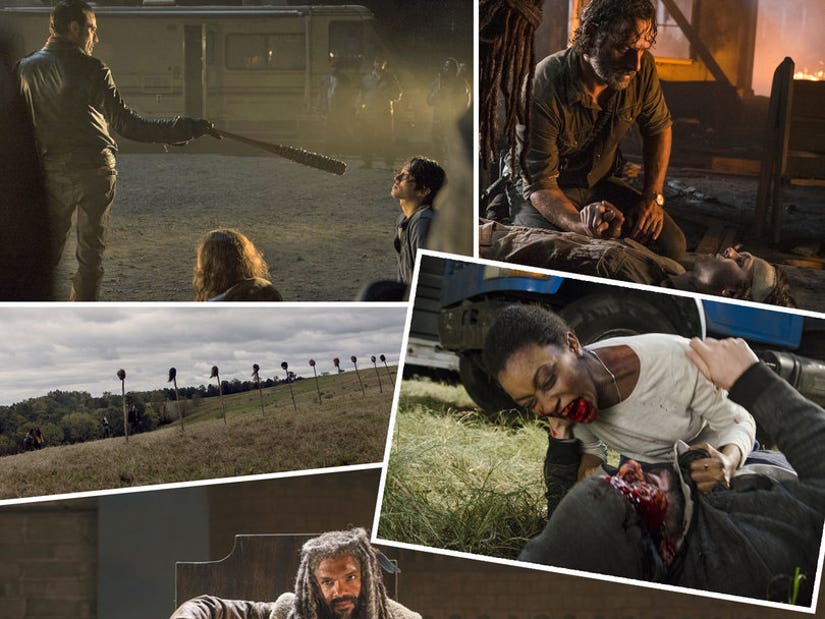