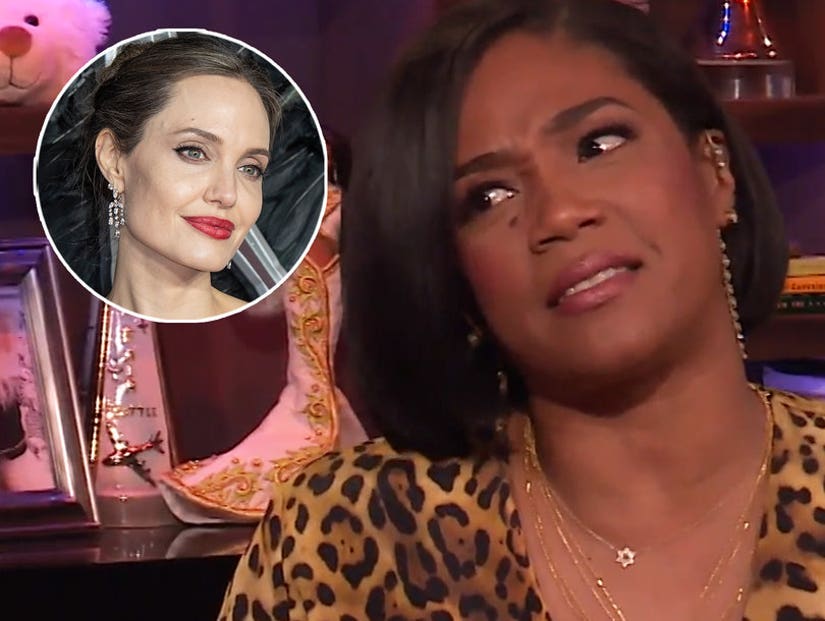 The comedian also describes an encounter with a "chewed-down" penis and says THIS about the wild Golden Globes after parties.

Tiffany Haddish appearing on "Watch What Happens Live" with her "Like a Boss" co-star Salma Hayek is a recipe for comedy gold.

The actresses chatted with host Andy Cohen Thursday night about everything from who was "most lit" at the Golden Globes to how Haddish's "Black Mitzvah" went to bizarre dick pics and even a potential girls night with Hayek's "Eternals" co-star, Angelina Jolie.

Here's every can't-miss moment from their sit-down with the Bravo boss:

When a caller asked Salma about the best and worst part about working alongside Angelina, she couldn't say enough good things about her. "I love her. I absolutely, absolutely love her," she said, adding that she was "a little bit" shy with Jolie in the beginning. "Something happened, and we work really well together as actresses," she added. "She's incredibly talented, and I've learned to discover a lot about her because she's not just out there, she's kind of private. I am really impressed with her as a mother, especially."

Interrupting, Tiffany asked if Salma would "let her know that I'd like to cook a meal for her?" Hayek reassured Haddish that Jolie would "love" her.

"I met her before, and I said, 'We should hang out,'" Tiffany said, repeating, "I would love to cook for her."

"I'm far from being a lesbian, but if I had to be, that's probably the route I would go," she added.

Salma seemed very on board with the plan, even promising to organize a girls night out. "We should all hang out," Tiffany replied. "I also wanna just cook for her 'cause I feel like she hungry."

Everyone laughed, as Cohen asked Haddish about her skills in the kitchen. "I'm an excellent cook!" she swore, which Hayek corroborated. 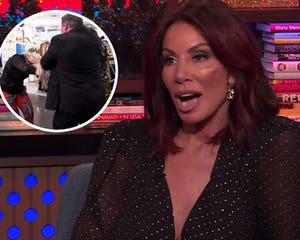 A caller asked both ladies which celebrity got "most lit" at Sunday's Golden Globes.

"The most lit?" Hayek adorably asked, before answering her own question. "Oh, drunk!" Haddish thought for half a second before outing herself. "I would say it's me!" she said. "I wasn't even drunk at all. I had smoked weed with Snoop Dogg, so that's what made me open up." She said she "hit up like four parties -- I was like a roach, I kept turning up" and asked every DJ to snag the mic. The last one at the Netflix party finally let her, and that's where she ended her night.

But Salma didn't necessarily not have a good time. "What I did was I went to the first food available. Like, the closest party so I could hit the buffet," she explained, confirming she went to the Amazon party. "I went, I ate, they tried to kick me out. They said, 'No eating [from] the buffet!' And I said, 'Yeah, go get the police 'cause I'm [hungry]!' I finished my plate and then I started partying once I got some food in me."

Andy grilled Tiffany about her recent celebration in the Jewish faith, asking which celebrity friends were most valuable in helping her prepare. Her response: "Sarah Silverman, Billy Crystal, Chelsea Handler." Sarah's sister, Susan, was even Tiffany's rabbi! The "Girls Trip" star also said she chose Billy to do her aliyah because "he means the world to me."

When Cohen asked who got the most drunk, Haddish said it was her "homegirl, Precious," who "thought a pregnant woman wanted to fight her!"

Looking at the simple yet elegant Star of David necklace Tiffany had on, Andy wondered if that was the one she had received from Barbra Streisand. It was.

"And if I like you, I let you kiss me right there," Tiffany said, prompting Andy to ask the obvious. She granted him permission, and his night was made.

Andy posed a series of resolutions on the comedian, wondering if she was ready to make the potential changes.

Q: Are you ready to drink less alcohol and drink more water? / A: I drink a lot of water, but she not ready.

Q: Are you ready to try intermittent fasting? / A: She ready!

Q: Are you ready to experiment more in the bedroom? / A: Well, see, I've done all the things. But not all of them! She not ready.

Q: Are you ready to reveal who bit Beyonce? / A: She not ready.

Q: Are you ready to overcome your aversion to acting in scary movies? / A: She not ready.

A caller asked the Mexican-American actress what it was like having the late Prince write a song about her -- "Te Amo Corazón" -- and wanted to know her favorite memory of the musician.

"That's really amazing because he wrote a song about me for my daughter to understand who I was at a time when she was not here, through his eyes," Hayek explained. "And so he came to my house, and he always used to show me music. 'What do you think? Should I put this one on the album?' He actually took my two cents into consideration! He had a car where the sound system was so good, he said you can hear the best inside of the car. And so he played it, and I thought it was gonna be another song, and it was that song. It was very meaningful."

In terms of her favorite memory, she said, "There were so many 2-hour -- this was before we had children -- phone conversations. Intense, deep conversations where you're trying to understand life. It's interesting how sometimes you can have a friend that you can talk [to] forever, any place, any moment. It just lifts you up."

A caller asked Haddish if it was true that she "used to collect dick pics" of the men she would date. The comedian couldn't wait to confirm. "Yup! Yup! I'm a collector!" she said excitedly.

Cohen pushed the question a bit further, wondering about the "strangest" penis she had ever encountered.

"Oh, it was this one..." she began, as Andy inched to the edge of his seat. "What I learned -- I'm a penialtologist -- and how a man's fingernails look, like from the fingernails to the fingers, is pretty much what his D look like right? So: 'Dirty nails, dirty D. Keep that thing away from me.'" Andy was in stitches.

"And this dude," Tiffany continued, "his fingernails was kind of chewed down, and I got him to pull it out to take the picture. His thing looked like it was chewed down, too! Like it had been through something! Like he had put himself through a lot. It was abused. It was bruised! It was bad. I was like, 'Oooh, you should let it be alone for a while.'"

Tiffany explained that she'd carry a disposable camera with her and ask her dates if she could snap a photo of their penis so she could "think about them later." Every single one of them said yes, even though she made sure to note she didn't have sex with a lot of them.