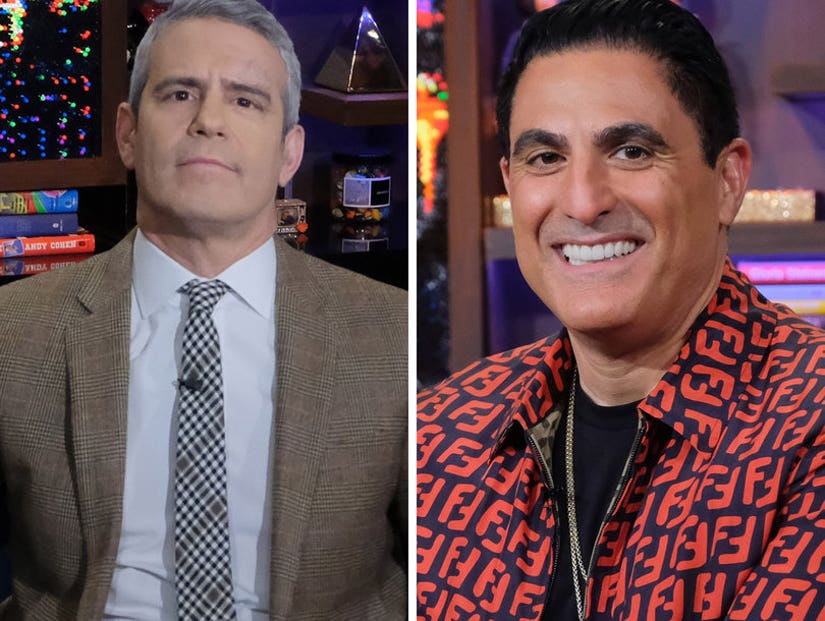 He also reveals where he stands with MJ now.

There's a "bumpy road" ahead for Reza Farahan and his husband, Adam, on "Shahs of Sunset" -- after Adam was accused of sharing nude photos and playing "strip Jenga" with other men while his other half was out of town.

Reza appeared on "Watch What Happens Live" after the season premiere last night, where he was asked flat out by Andy Cohen whether the two have "an open thing" that nobody else knew about.

"It was a big surprise to me," he said of the allegations, which were brought to his attention by Mike Shouhed and Destiney Rose. "It was the start of everything that went wrong with my relationship with Adam and the demise of my friendship with MJ. That's the start. The ball started to roll."

"I don't wanna ruin anything in the season, but if you guys keep watching, we have a very bumpy road ahead of us," he added of his relationship with his husband.

As for the Mercedes "MJ" Javid drama, she began slamming her costars -- and Reza in particular -- after she gave birth to her son, Shams Francis Feight, weeks ahead of schedule. She said Reza blocked her on social media at the time and nobody else from the show reached out to her to see how she was doing. It all escalated from there, with MJ's husband allegedly vandalizing Reza's house, leading to Reza getting a restraining order against him.

While it's been almost a year since MJ gave birth, Reza confirmed on "WWHL" that he hasn't met baby Shams yet and called the situation "heartbreaking."

After he previously said he and his former BFF were in a "much better place" while attending BravoCon earlier this year, he clarified those remarks after a caller asked where they stood now.

"When I said we were in a good place it was because we weren't communicating anymore and we weren't fighting," he explained. "It was better than when we were fighting with one another. Unfortunately, we are not in a great place, we don't communicate with one another and I'm praying god heals my heart, her heart and our respective spouses hearts and at a later date we're able to come together again."

"Shahs of Sunset" airs Sundays on Bravo. Watch the video below to see what Shouhed told TooFab about all the drama to come!