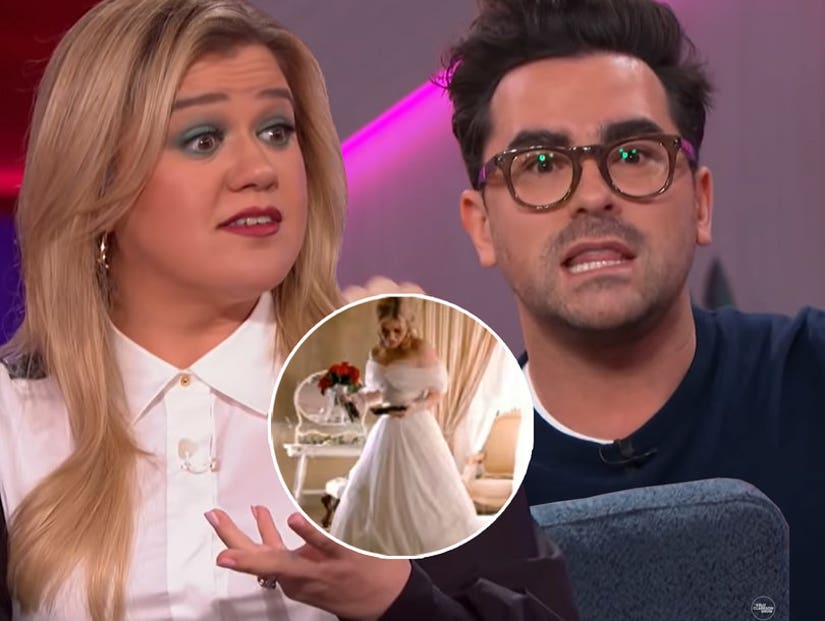 Long before he was the star and co-creator of the beloved "Schitt's Creek," Dan Levy was an extra in one of Kelly Clarkson's music videos -- something they reminisced over when he appeared on her talk show this week.

The actor revealed he made a blink and you miss it cameo during the wedding scene of her "Behind Those Hazel Eyes" video, which sees her leaving a man at the altar after discovering he's been cheating on her.

On Tuesday's episode of her show, Kelly and Dan recalled an accident that happened on set as Clarkson stormed out of the wedding in dramatic fashion, flinging open the church doors and walking into the sunlight.

"No one actually told me that there were stairs when you opened the doors," she explained. "They said, 'We want you to run out because you're so mad because your bridesmaid has been with your man.' I was like, 'Okay!' I was in track, I ran and I ran so hard, I didn't actually fall, I flew down the stairs with this giant dress, didn't get one bruise."

"What you didn't get to see was what I saw," said Levy, as the singer joked, "Kelly Clarkson die."

"The direction for the people at the wedding was, 'Kelly's gonna run by you, you're shocked, you're stunned, there's drama and watch her as she runs through,'" said Levy. "We watched the doors fling open and then we watched you free fall forward, down a set of stairs and then there was an odd calm that hit the room. Is she, still alive? What happened to her? I remember, a voice -- there was 15 seconds of deafening silence -- and then we hear down the stairs 'I'm good!'"

Later in the show, the two were joined by guest Stephanie Beatriz from "Brooklyn Nine-Nine," who freaked out at the chance to meet Levy.

"I just have to say as a fellow person in the queer community, I am so amazed by you," said the actress, who identifies as bisexual. "I'm gonna cry. I just think that your work in general is so beautiful and so thrilling. You've introduced audiences to this character who just so happens to be who he is and that is the way to create change, social change, empathy in people, it's so incredible." 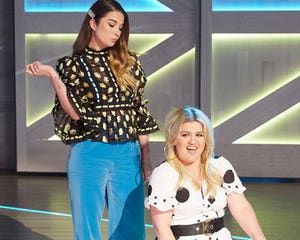