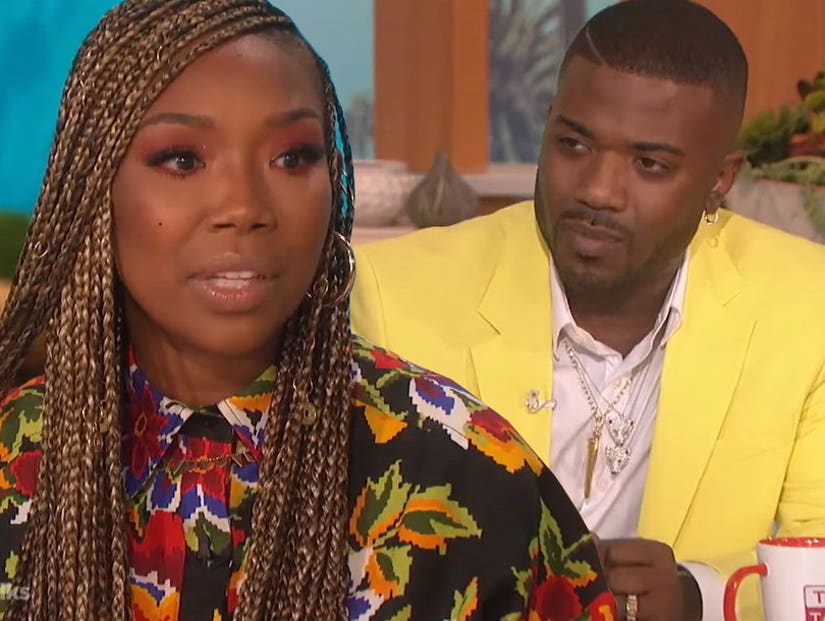 Appearing on The Talk, he and sister Brandy also chime in on Kim Kardashan's latest cultural appropriation scandal.

Ray J and wife Princess Love have been on the outs since she accused him of abandoning her in Las Vegas while he went off to a strip club back in November. And, according to Ray J himself, it's been anything but smooth sailing since then.

The performer and his sister Brandy both appeared on "The Talk" on Wednesday, where they discussed his relationship woes and gave their two cents when it came to his ex-girlfriend Kim Kardashian's latest cultural appropriation scandal.

With his 4-part Zeus special "Ray J & Princess Love -- The Conversation" dropping March 15, Ray J revealed what it was like filming the series -- which sees him and his wife having a brutally honest face-to-face convo without a host, producers or therapists in the room.

"It's hot in the kitchen," he said of their marriage. "I watched a little bit of the conversation that we had and I'm still bothered just by where we are, but God is working everything through. And we are trying to address the situation. You know what I'm saying, and try to become a solution to the problem."

"So it just takes a little bit of time," he added. "And it's a really rocky, bumpy road and we're trying to figure it out. Even though this process, I feel like a lot of people can relate to it."

Brandy was then asked what it's like for her to see her brother's relationship problems play out in the public eye. Before they signed onto the Zeus special, Ray J and Princess Love hit back and forth at each other on social media, welcoming headlines from entertainment news sites.

"I have a soft spot for Ray J, so it's very hard to hear his life, you know, all over social media and television, you know, it's difficult," she explained. "And I just feel some things should be dealt in private, so it won't be a lot of people in his comments and business and Princess' business. I think that everybody doesn't have to have a say in what is going on in your life."

As most interviews with Ray J usually do, his convo on "The Talk" also veered into Kim Kardashian territory, as one of the hot topics of the day was her getting accused of cultural appropriation for once again rocking braids to the Yeezy show at Paris Fashion Week.

"I don't think that she's guilty," Brandy said, defending Kim. "I definitely believe in [cultural appropriation], but I think it's reaching a little bit. I mean, it's great, I love braids. I think everybody should have braids, but I think we're going too far with that with her."

It got a little awkward when the hosts then asked for Ray J's opinion, but he handled it diplomatically as well.

"Here's what I think. I got nothing but respect. I just think that, if you are paying homage to another culture by you know, rocking the braids, I think it's a compliment," he said. "I think it should be looked at as, it's going global, you know. And, I think that when you get up and you feel good and you look good and other people say, 'Hey, I want to look like that,' I want to feel good, I want to look like that, it should be a compliment and a plus."