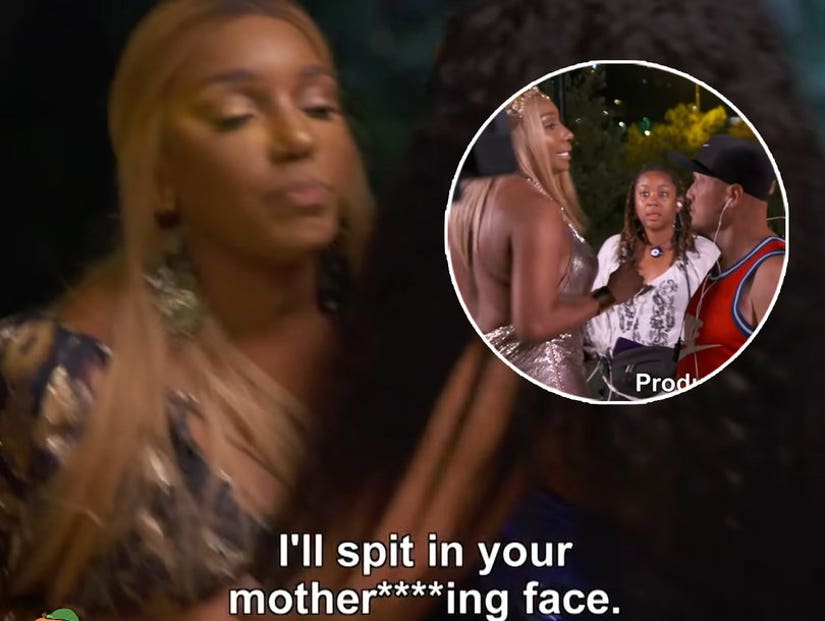 "Don't f--k with me," NeNe tells a producer as she storms out.

The Real Housewives of Atlanta's Greek tragedy of a vacation continued to play out Sunday night.

The episode kicked off by showing the rest of the nasty fight between NeNe Leakes and Kenya Moore, with Leakes appearing to spit in Kenya's direction as she shouted, "I'll spit in your mother f--king face!"

The women were all shocked at this outburst, which Kenya called "gutter behavior" in a confessional. Speaking to the camera, Cynthia Bailey said she had no idea "what the hell is going on," while Kandi Burruss said that NeNe "deserves an ass whooping" for her actions.

Leakes, however, told the camera that, "In Greece, it's a good thing to be spit on. We're in Greece. She should want all these popcorn seeds. Your marriage will probably survive."

Somehow, some sense of order returned to the group, where Kenya explained that her only issue with NeNe is "her calling my baby a buffalo," a comment she said Leakes has "never addressed" or ever apologized for. When Moore was pregnant, NeNe was previously seen commenting, "She's going to have a buffalo, isn't she?" on the show.

Though she was screaming the "apology" and still appeared angry, Moore said the conversation was "done" and she vowed to "never revisit it again."

With that mess of a bonding activity over, the women went to party at Lohan Beach Club before heading back to their home to play another ill-advised game.

To work on her acting chops before appearing on "The Chi," Kandi decided she and Cynthia were going to do a role-playing exercise in which they would play NeNe and Kenya and act out a real apology between the two. Kenya was roaring, busting out her camera to record it. NeNe, however, was not having it.

"I ain't got time to listen to this bullshit. I don't give a damn," she said as she got up and tried to excuse herself to the restroom. "They can keep their dramatization going, I don't have to be there for that."

"Let me mind my business, I'm going to the bathroom," she said as she got up, before unloading on the show's producers. "Who the f--k you think you are? You gonna guard me and tell me what to do?"

One of the producers was then heard asking if she was leaving the shoot or actually going to the bathroom. NeNe's response: "Don't f--k with me, I'm for real."

"Don't play games with me. I'm going to my room and I'm getting ready to pack and go home," she continued. "I don't have time for the playing the games."

The episode ended with her retreating to her room, as she said in a confessional, "I'm not doing this. I'm getting ready to leave and go to the bathroom and I might flush myself down the toilet. Bye."

On the Bravo after-show, she admitted she left because "at that point, I was over it." She didn't like the fact Kandi and Cynthia -- "who are [Kenya's] friends, who are supporting her" -- were going to tackle anything involving her. "I was like, I'm not here for it, goodbye," she added.

She also said that "everybody that was there knows there was no spit" during her confrontation with Kenya. "I said I'll spit on you," she added, "But of course she needs something to hold onto, this is good for her." 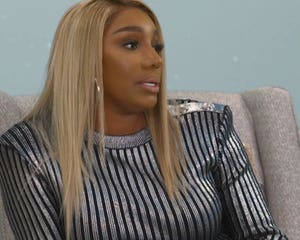