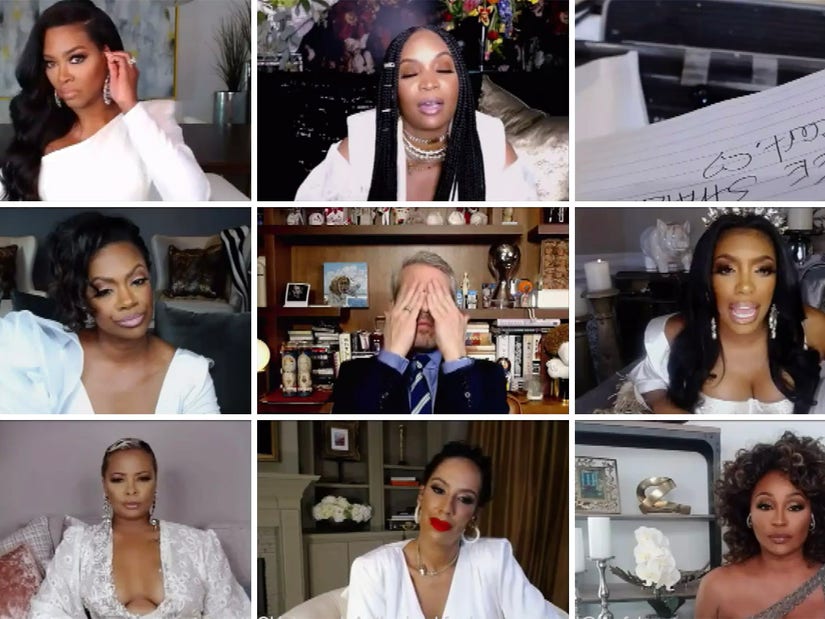 "What? Are you kidding me? It looks like NeNe stepped away," exclaimed Andy. "I don't know what's happening there."

NeNe Leakes left her "Real Housewives of Atlanta" costars shocked on Part 2 of this season's reunion Sunday night -- when she walked off and didn't appear to return.

After the episode aired, she went to Instagram to explain her decision to step away from the virtual special, as the preview for Part 3 didn't show her at all. At this point, it's unclear whether she'll be back or if that was it for the season.

Throughout the episode, Leakes once again got into some very heated moments with Kenya Moore, Eva Marcille and Kandi Burruss.

Kenya called her "the ugliest bitch on the show," before telling her "Bye fake chin, fake nose!" and claiming NeNe had a ghost writer come up with her insults. When NeNe stood by her belief Kenya "deserved" her relationship woes with Marc Daly, Moore asked, "Do you deserve Gregg having relationships with your help?"

That was a reference to Leakes admitting Gregg was caught having "inappropriate" conversations with a former employee.

"Who your man messing around with? It ain't you!" NeNe hit back, but the dig didn't seem to bother Kenya at all. "We're separated, it could be anybody," she replied, "If he's out on a date, he's out on a date honey."

Kandi and NeNe then went into it over digs they'd been making at each other on social media after filming wrapped. Andy Cohen mentioned comments NeNe made on her YouTube channel, seemingly complaining about Kandi getting a spinoff show. Leakes denied she was talking about Kandi.

"I was on YouTube, my own personal channel. I don't have to answer to you, Miss I'm Real Atlanta," she shot at Kandi. "Get your smoke somewhere else girl. If I got anything to say, I will say it to your face. Who are you to run from, Kandi! We didn't along all season, you shady as hell! You were never trying to be cool. You're forgettable."

As they began screaming back at forth at each other, Andy put them both on mute. When they stopped talking, he let NeNe continue.

"I text Kandi and told her it had nothing to do with her. She still went to the next level with it," she claimed. "If I wanted to talk about Miss Boring, I would have talked about her."

As Eva started to interject, NeNe told her to stay out of it, adding, "Go back to L.A. to lick some more bottoms to be on top." As Leakes' shouting continued, Andy again muted her.

"I'm so over it. Such haters. They're just a bunch of haters. That's why I can't stand them, it's so ridiculous, it's crazy," she muttered to herself as a clip package rolled. "What would they do if I wasn't even here. Who the f--k are they even gonna talk to? What would they do?"

With that, she put the camera down and walked off. When he noticed what had happened, Cohen exclaimed, "What? Are you kidding me? It looks like NeNe stepped away. I don't know what's happening there."

Kenya shouted "NeNe left the set for good," while Eva started laughing. "When the heat gets hot, Andy, you get out of the kitchen!" A preview for the third and final episode of the reunion didn't have NeNe in it at all, but did show a forthcoming interview with former NeNe's former friend-turned-nemesis Yovanna Momplaisir.

Taking to Instagram after the episode ended, Leakes shared a post explaining her decision to step away from the camera.

"It only felt right to personally REMOVE MYSELF from the reunion! So much had happened this season! (the cookie lady, Mark & Kenya's fake marriage, Dennis accusations, Snake gate and much much more) but drilling me on subjects, muting me, flashing back to things that happened with Wendy while in quarantine (why didn't they ask about Kandi's restaurant shooting then if that's what were doing)," she explained.

"After deciding that apologizing for certain things was only right that, that wasn't genuine enough. Starting over with lil sis Porsha was made fun of," she continued.

Then, seemingly taking aim at Yovanna's upcoming appearance, she added, "and here they go bringing someone on the reunion that I was personally told my executives wasn't allowed on set anymore! All this and so much more felt like the rules only applied to me and that I was being held to a different standard than others but you continue to be the judge."

We'll see if she pops up for Part 3 next Sunday on Bravo.