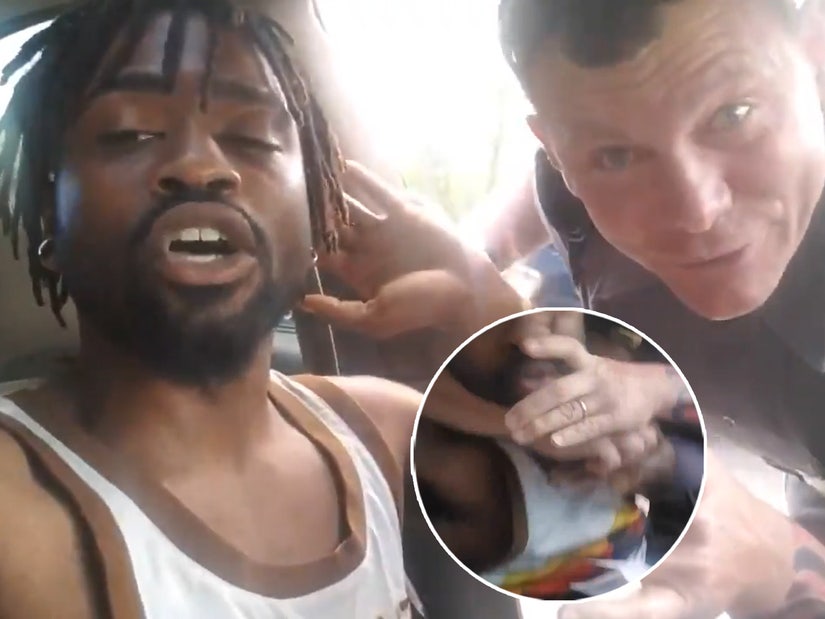 "Watch the show folks!" he told the camera before dragging him out by his neck.

The Virginia State Police Trooper who was filmed giving a Black driver an "ass whooping" has been fired.

VSP Communications Director Corinne Geller confirmed to the Washington Post that Charles Hewitt is no longer with the agency, adding she was prohibited from giving any additional details.

But Joshua Erlich, attorney for the driver Derrick Thompson, confirmed he was fired for cause in February.

He revealed the lawsuit taken by Thompson, who claimed his constitutional rights had been violated, had been settled this month for $20k, with no admission of wrongdoing by the state.

"Mr. Thompson filed this case because Trooper Hewitt's behavior was unconscionable, and Mr. Thompson is happy with the outcome," Erlich told the publication. "He thought he deserved — and received — monetary compensation."

"And although the VSP did not admit to any wrongdoing, Mr. Thompson is heartened Trooper Hewitt is no longer on the street and thinks Virginia is safer for it."

A Virginia police officer was filmed dragging a Black man out of his car by his neck after threatening to whoop his "ass".

The disturbing video shot by Derrick Thompson shows the moment he was pulled over by a State Trooper, identified as Charles Hewitt, while he was driving to work.

Thompson began filming the traffic stop in fear of his safety, but the presence of the camera didn't seem to have the desired effect, as the grinning officer tells viewers "Watch the show, folks!" before dragging him out of the car.

The incident occurred in April of 2019, but only came to light this week after civil rights lawyer Joshua Erlich took on the case, sending a letter to VA Attorney General Mark Herring.

He claimed that on the day in question, another State Trooper stopped Thompson, claiming his inspection sticker was expired and that she detected an odor of marijuana from the car.

When Thompson did not give consent for a search, she called for back-up. Thompson began filming, and captured the arrival of Trooper Hewitt.

The video shows Hewitt opening the car door, and getting right in Thompson's face to tell him: "Take a look at me, I am a f--king specimen right here buddy, you have gotten on my last nerve, alright?"

Today, we sent a letter to @MarkHerringVA about Virginia State Trooper Charles Hewitt.

In April 2019, Derrick Thompson was driving to work when Hewitt terrorized and assaulted him. pic.twitter.com/YTSCeDLM9j

Thompson shows the camera he is unarmed and that his hands are up, repeatedly and calmly insisting he feels unsafe, and is no threat to the three officers now surrounding his car.

Noticing the camera, Hewitt then smiles and informs the driver: "You're gonna get your ass whooped in front of f--king Lord and all creation."

"You can take your phone with you," the officer continues as he reaches over to unbuckle his seat belt, but Thompson continues to ignore orders to get out of the car.

"I'm giving you to the count of three," he roars in his face, before turning to the camera to give him a smiling countdown: "One... two... watch the show, folks!"

Hewitt then grabs Thompson by the neck and drags him out of the car; his camera falls over in the struggle, but the audio continues to record.

"My hands are behind my back! I'm not resisting," Thompson can be heard crying. "Sir please get off my neck! You are harming me!"

In the letter, Erlich claims that before the incident, Thompson asked the other officers for their names and badge numbers; one ignored him, while the other said he forgot.

When he asked Hewitt, pointing out that as a taxpayer his request was justified, he said Hewitt replied "You pay about forty cents of state taxes."

He said that when he told Hewitt he believed his detention was illegal, Hewitt responded: "Brother, how do you think all of this is going to end? Are you ready to go through all of this today, just for that? There's probably not even any weed in there."

He said Hewitt pointed to the camera and acknowledged it was going to get posted on YouTube, but that everyone who watched it was going to label him "the most coolest, calmest, collected cop in the whole nation".

After grabbing him, Thompson claimed he was thrown face down into the pavement, before Hewitt held his neck in place with either his knee or elbow while he handcuffed him.

Having suffered multiple cuts and abrasions, Thompson said he requested medical attention several times, but was told "you're not even hurt."

When Thompson was placed in the police car, he said Hewitt tried to explain that what had happened had nothing to do with his race; he claimed that because his own wife was Black, he could not possibly be racist.

According to Erlich, Hewitt's wife is not Black.

No evidence of any crime was found in Thompson's car.

TooFab has Reached out to Virginia State Police for comment. 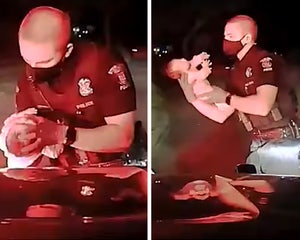