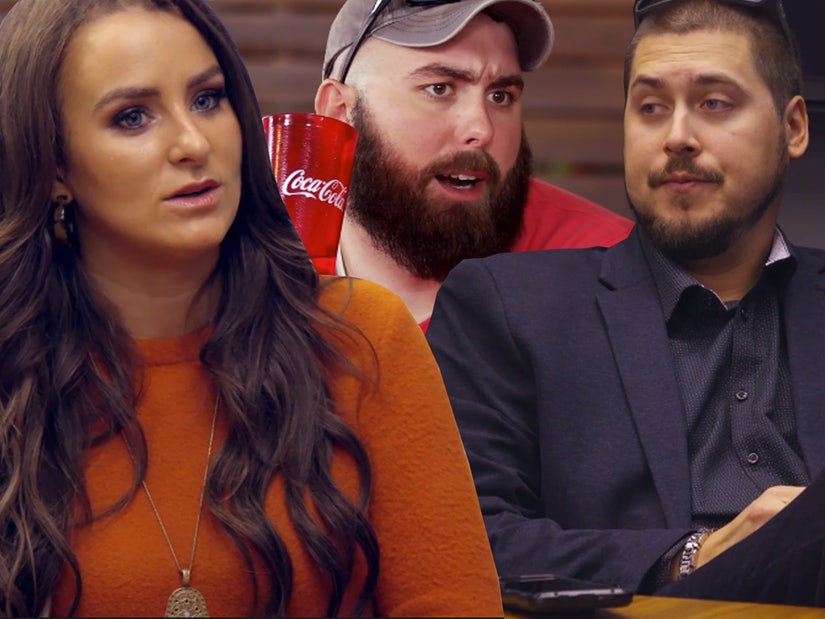 "Son of a bitch, you don't talk about my s--t," says Corey after reunion slam.

The drama from the Season 9 "Teen Mom 2" reunion bled into the Season 10 premiere, with Leah Messer dealing with the immediate fallout.

During the reunion, Leah's ex Jeremy Calvert slammed her other ex, Corey Simms, for never going to Ali's doctor's appointments. "I don't give a f--k if its a two minute appointment, at least show your presence for your child," he said, adding that Simms has no excuse. "Corey has a f--king great schedule, he works at home and he can take off whenever the f--k he wants to."

The new season picked up immediately after the taping, with Leah saying Jeremy's concerns put her "in a tough spot" and weren't anything she ever planned on bringing up to Corey.

While Leah continued to defend Corey -- saying they had an arrangement that worked for them and their schedules -- her friends were on Jeremy's side. Leah then admitted she hates "confrontation."

Though Jeremy believed the reunion was "terrific," Leah felt bad Corey didn't get to share his side of the story at all. Fans, however, saw Corey's reaction at the time when he angrily tweeted, "And for Mr. Dad of the year to run his mouth about not going to doctors appointments ... how many have you been to there big guy?"

Calvert told Leah he thought the tweets were "funny," but she, of course, didn't agree. "It's not funny," she told him. "I just want to do what's best for the kids. It's not that you're wrong, but that's what's been routine for us. That's what works for us."

Viewers later saw Corey react to the situation with his friends in the premiere, saying the "drama train" came and ran "plum over us" thanks to Jeremy's comments.

"I was upset at what was said, but also at the fact I didn't have the opportunity to explain or defend myself," he said. "It just overtook my emotions. It made it look like I didn't go to the doctors because I don't care. I didn't know that he knew what my time off was. Son of a bitch, you don't talk about my shit, is what I feel. It came from left field."

The hour ended with Leah getting input from the one person who really matters in all this: Ali.

"Do you want daddy to come to more of your appointments?" she asked her daughter, who said, yes, she did.

TooFab caught up with Leah ahead of the premiere, where she revealed Jeremy and Corey "never talk." She added, "we won't be having [an in-person] reunion this year, so that's a good thing in my opinion."

She was grateful, however, that the situation "opened up a line of communication that I have never had with Corey," and Ali as well.

"Her opinion is the only opinion that matters when it comes down to who she wants at her appointments and who she feels more comfortable at her appointments," said Leah. "Definitely communication has been better with her being able to communicate that and also to learn that she's not going to hurt either parents' feelings by saying something."

"Our feelings don't matter when it comes down to your health and your well-being," she added. "I'm definitely grateful that it opened that line of communication up not just for me and her father but for her and her father."