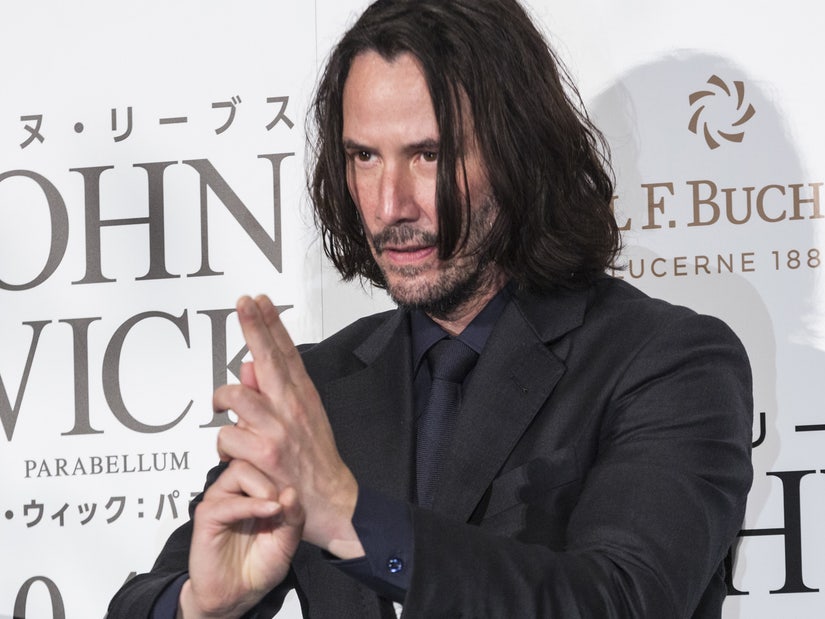 Love comes in all shapes ... and levels of fame!

There are a million ways to fall in love -- some say "like attracts like", others say opposites attract.

Regardless, there is no magic formula for lasting romance.

Here are 25 A-listers who found love with someone far less famous, but no less special.

Zac Efron is reportedly dating aspiring model Vanessa Valladares whom he met while she was a waitress at Byron Bay General Store earlier this summer. Since then, the duo have been enjoying each other's company and the great outdoors -- they were even spotted on a ski trip in Australia!

"Zac met Ness earlier in the summer. They started hanging out in July...You can tell that they are having fun. She spends a lot of time at this house,” a source told ​People​.

Camila Mendes recently made things Instagram official with her photographer beau Grayson Vaughan. The duo had been spotted getting cozy in Los Angeles, but didn’t confirm their relationship until Camila had to fly to Canada to continue filming “Riverdale.”

“long distance love,” Camila captioned a photo of the duo kissing in front of a private plane.

Niall Horan keeps his love life low key but is said to be dating designer shoe buyer Amelia Woolle, who works as a commercial assistant for “Nicholas Kirkwood.” The duo have been seen out in London on several occasions and have reportedly been dating for several months.

“Niall is very serious about Amelia, lockdown has definitely intensified his feelings for her...He thinks Amelia's gorgeous but they also really get on – and she's told close friends this could be the real deal,” a source told DailyMail.

Maisie Williams met her boyfriend Reuben Selby when he was the communications director for her talent agency app, Daisie. He is also the founder of modeling platform the Contact Agency and the co-founder of Cortex, an online magazine. The couple have been linked since February 2019 and since then, have shared some sweet moments like their matching outfits at Joe Jonas and Sophie Turner’s wedding rehearsal dinner!

Joel Courtney and fiancée Mia Scholink have known each other since they were children! While it’s not clear how long they’ve been dating, Joel did pop the question over Valentine’s Day weekend in 2020.

"This woman right here, lemme tell you a lil bit about her. She is kind, patient, hysterical, forgiving, so beautiful she makes my heart stop, honest, and joyful. I love you @mia_scholink and I am so blessed to have you as my fiancée," Joel wrote on his Instagram.

Ansel Elgort met his ballerina girlfriend Violetta Komyshan while they were attending Fiorello H. LaGuardia High School of Music & Art and Performing Arts in New York City. The high school sweethearts have been dating for over six years.

Romee Strijd and her husband Laurens van Leeuwen have known each other almost their whole lives! The duo met because Laurens was the older brother of Romee’s childhood friend. The sweet couple, who have been together over nine years, are now expecting their first child.

Amy Schumer met her award-winning chef husband Chris Fischer through her personal assistant Molly. Chris happens to be Molly’s brother and in 2017, Molly suggested that Chris come to Amy’s vacation home to cook for her. Things moved fast for the couple and they tied the knot in February of the following year. They went on to welcome their first child in 2019.

Lady Gaga made things Instagram official with her entrepreneur boyfriend Michael Polansky at the beginning of 2020 but they’re said to have been dating for several months beforehand. Michael is CEO of Facebook co-founder Sean Parker's The Parker Group and runs his Institute for Cancer Immunotherapy. Gaga has attended the charity’s benefits in the past, so it’s likely how the duo connected.

Shay Mitchell has been dating her boyfriend Matte Babel for over three years but they kept their relationship private for a long time. When the couple shared their pregnancy news in 2019, some fans were surprised to learn she even had a boyfriend! Since the announcement, Shay and Matte, who works for management company Dreamcrew, have been very open about their relationship and have shared an inside look at their family life on YouTube.

Keanu Reeves made things red carpet official with longtime friend Alexandra Grant in 2019, but the duo were reportedly dating for several years prior. Keanu and Alexandra met at a dinner party and have since collaborated on several projects, including two volumes of poetry which were written by Keanu and illustrated by Alexandra. They also co-founded X Artists’ Books, an art-book publishing house.

Louis Tomlinson has been dating his girlfriend Eleanor Calder since 2011. It’s not quite clear how the very private couple met but fans believe that they were introduced by Louis’ One Direction bandmate Harry Styles. Louis and Eleanor dated at the peak of 1D’s fame but split in 2015. After Louis welcomed his first child with ex Briana Jungwirth in 2016, Louis and Eleanor reconciled a year later.

Britney Spears met her personal trainer boyfriend Sam Asghari when he played the love interest in her “Slumber Party” music video in 2016. After chatting on set, Sam left his phone number for Britney in her bag. She kept his number for a while before finally giving him a call and they’ve been together ever since!

Oprah and her partner Stedman Graham have been going strong for over 30 years! The duo met at a charity event in 1986 and have been together since then. While they never tied the knot, the couple says that that decision is what kept their relationship strong.

"The only time I brought it up was when I said to Stedman, ‘What would have happened if we had actually gotten married?’ And the answer is: ‘We wouldn’t be together.’ We would not have stayed together, because marriage requires a different way of being in this world. His interpretation of what it means to be a husband and what it would mean for me to be a wife would have been pretty traditional, and I would not have been able to fit into that,” Oprah told Vogue.

Bruno Mars has been dating his model partner Jessica Caban since 2011. According to the “Bruno Mars” biography, Bruno first saw Jessica at a restaurant and approached her. While the couple keeps things private, Jessica has joined Bruno on the red carpet on several occasions.

Anna Kendrick is an expert at keeping her private life out of the public eye but she’s been quietly dating her cinematographer boyfriend Ben Richardson for six years. The duo reportedly first met on the set of “Drinking Buddies” in 2013. While they’re not spotted together often, they are said to still be dating!

Mariah Carey has been in a relationship with dancer Bryan Tanaka for several years. The duo first met when Bryan was a backup dancer for Mariah and went public with their relationship in February 2017. The duo are still going strong!

“I’m so grateful for you. The world is a better place because of you! ❤️🦋” Bryan wrote on his Instagram earlier this year.

Jennifer Lawrence and art dealer Cooke Maroney met through a mutual friend in 2018. Despite keeping their relationship extremely low-key, things moved fast and they tied the knot in 2019.

Kate Hudson had been friends with her musician beau Danny Fujikawa for many years before they began dating. They went public with their relationship in 2017. They met through his step-sisters (and Kate’s close friends), Sara and Erin Foster.

"We've known each other for 15 years. He's my best friend's stepbrother. We kinda skipped through the part of knowing what the hiccups were. You kinda skip the part of going, 'Oh, you're like that?' In terms of family, I've known his family forever. To have that connection is really powerful,” Kate said on “The Talk.”

Kate and Danny have since gotten engaged and welcomed their daughter Rani.

Matt Damon met his wife Luciana Barroso while she was a bartender at Miami’s Crobar, when he was in town filming “Stuck On You.” It was love at first sight for Matt. The couple got married in December 2005 and now have four children.

“I literally saw her across a crowded room and eight years and four kids later, that’s my life. I don’t know how else our paths would have crossed if that didn’t happen,” Matt said on “The Ellen Show.”

Eddie Redmayne has known his wife Hannah Bagshawe since their school days! The duo first met while he was attending an English all-boys boarding school and she was at a nearby boarding school for girls. Eddie and Hannah were friends for 12 years before they began dating in 2012, when Hannah was a financial publicist. They made their red carpet debut that year and got married in 2014.

Alec first met his wife Hilaria in 2011 at a New York City vegan restaurant where he spotted her across the room and introduced himself. At the time, Hilaria was working at Yoga Vida, the yoga studio she opened after college. The duo tied the knot a little over a year later and have since welcomed five children.

Paul Rudd met his wife Julie Yaeger at his publicist’s office in New York City, where she was working as a publicist herself. Paul was reportedly late to an audition and Julie offered to drop the luggage he was carrying at his friend’s apartment. He later asked her out to lunch and they began dating. After eight years together, they tied the knot in 2003 and have two children together.

George Clooney met human rights lawyer Amal Alamuddin when they were introduced by a mutual friend at a dinner party in Italy in 2013. They got married the following year and welcomed their twins Ella and Alexander, in 2017.

In 2008, Anne Hathaway met her now-husband Adam Shulman, an actor and jewelry designer, through a mutual friend at the Palm Springs Film Festival. She says that she immediately told the friend that she was going to marry Adam.

“I knew from the second I met him that he was the love of my life. I also knew that I couldn’t have met him at a worse time... I took my trust out for a ridiculous joyride with him...It was scary. But as the days wore on it kept on getting better and better. I found that the love I found for him made me more trusting of everyone,” Anne told Harper’s Bazaar.