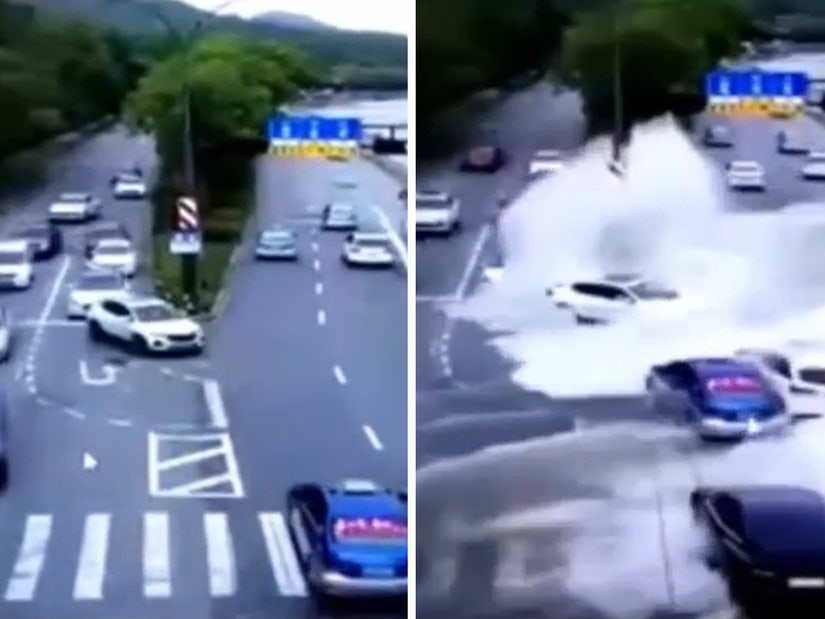 The gigantic natural phenomenon swallowed the traffic in mere seconds.

A massive natural phenomenon known as a "tidal bore" crashed onto a road and swept several vehicles away in its aftermath in China on Sunday.

Security video next to the Qiantang River in eastern China shows the shocking moment a strong tide pushed against the river's current causing a gigantic wave to rush over the traffic-strewn streets.

Several cars were damaged during the incident, but no casualties were reported, according to osheebTV.

The terrifying footage shows the water swallowing six lanes of vehicles next to a narrow beach alongside the river. Another video -- taken from a dashboard camera -- captures the moment the water consumes the vehicle, spinning it around as it rams other cars.

Even more frightful, another video depicts pedestrians standing nearby as they leisurely await the tidal bore to land so they can take pictures of it.

The shutterbugs, however, are not an unusual occurrence as the Qiantang River attracts hundreds of spectators in autumn for its record-breaking tidal bores. According to reports, they are the largest in the world -- reaching up to 30 feet high with speeds up to 25 mph.

Chinese weather authorities even put out a statement to spectators on Tuesday, warning them that the tidal bores may be the biggest ones in recent years, per the Daily Mail.