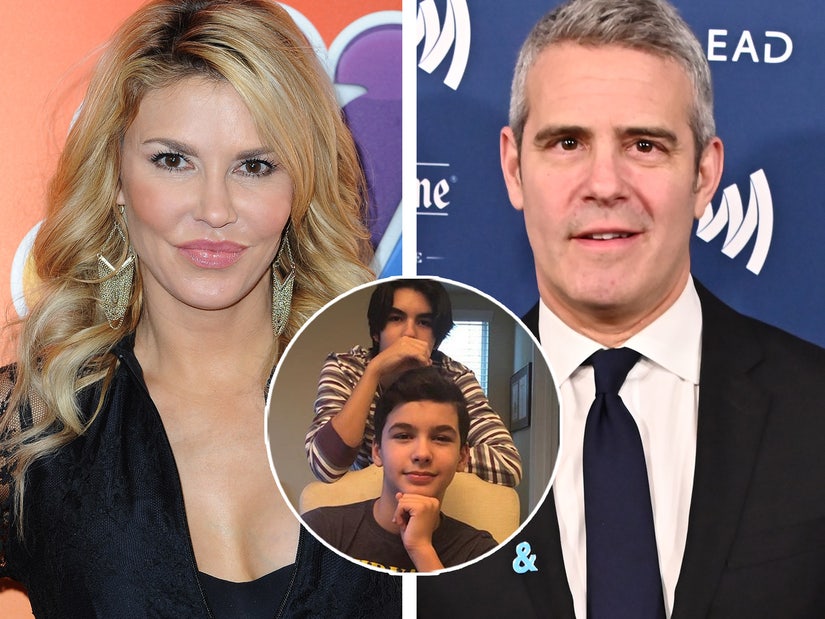 Brandi Glanville's allegations about Denise Richards certainly steered the latter half of the season on "Real Housewives of Beverly Hills" -- and her sons think she should be rewarded handsomely for it.

Andy Cohen, the EP of the "Housewives" franchise, was Glanville's guest on the most recent episode of her "Brandi Glanville Unfiltered" podcast, where she first flat-out asked why she's not full time again ... before recruiting her kids to push him even more.

Bringing up Cohen's past explanation Brandi initially got the boot from RHOBH because none of the other women liked her at the time, Glanville said that's not the case anymore. "So what is the excuse now?" she asked.

"I don't know the answer to that. You're not on an island, but you're not exactly friends with any of the women," he said. After she noted she texts with Kyle Richards a lot and is "very close" with her sister, Kim Richards, Cohen admitted, "I would say you're as close to being back as you've been in a long time."

Later in the podcast, her 17-year-old son Mason Cibrian hopped on the line to ask Andy his own question.

"Now that we are allowed to be on the show, are you gonna give my mom a second chance?" he asked, claiming their father Eddie Cibrian -- who reportedly banned Mason and Jake from being on the show in the past -- would now be totally fine with it.

"So you're allowed to be on the show now?" asked Andy. "According to your father? Really? Well, that's a discussion Mason. And you want your mom on the show why?"

"Because she deserves it," added Mason. "You kind of milked her for everything this season to make some views and stuff and she hasn't gotten even half as much as the other Housewives. I feel like she should be compensated. She's the best woman I've ever met."

While 13-yea-old Jake was at school when they recorded the podcast, Brandi posted a video of what he would have asked Andy to her Instagram Story. Though it's since expired, you can watch it above.

"I was wondering if you would do the right thing and give my mom her job back like you said you would," he said. "Because she was like the main focus of the whole season and like get her money back so we can move out of this place and get her what she deserves."

Andy has yet to respond to Jake's plea.

Glanville was a main cast member for Seasons 3-6, before making guest appearances in Seasons 4, 9 and 10. Her claims that she had sex with Richards and Richards slammed the other women behind their backs dominated the back half of Season 10, with Denise quitting the show following the reunion.