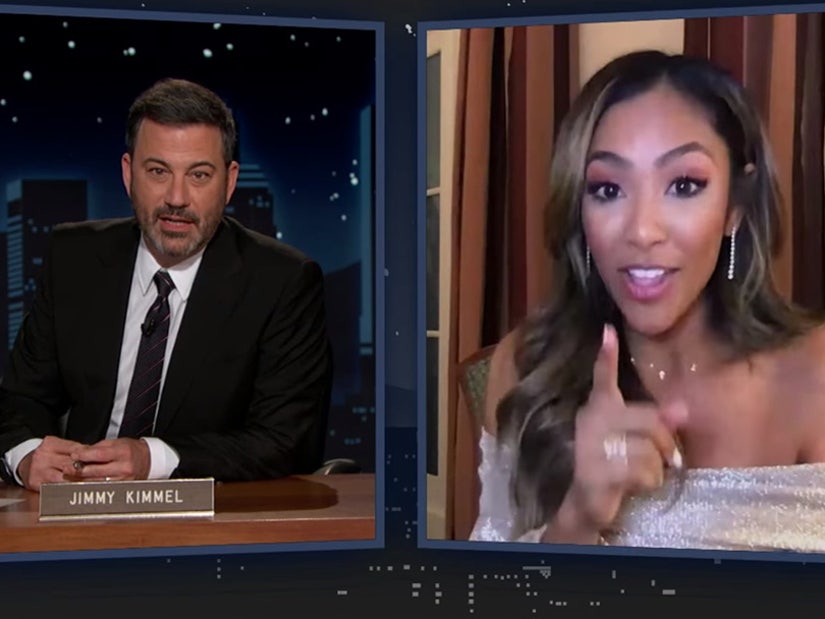 By the time the interview was over, the first ever mid-season "Bachelorette" had decided she needed to remove the word "honestly" from her vocabulary.

We're not sure how much Jimmy Kimmel really cares about Bachelor Nation, as he doesn't seem to be paying too much attention to what's going on this season, but he always has fun tormenting each Bachelor and Bachelorette.

This season, he had the pleasure of poking and prodding at two different women, as Thursday night's episode finally revealed what the Nation has known all along. By the end of the election-bumped episode, Clare Crawley had wrapped her run on the show, and Tayshia Adams was quite literally stepping in. 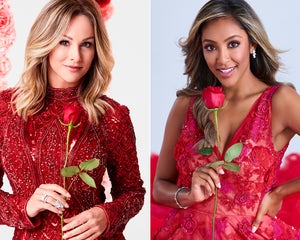 It's a tenuous situation to be certain, with Tayshia literally taking over where Clare left off, facing the 16 men Clare left hanging after she -- SPOILER ALERT -- ran off and got engaged with contestant Dale Moss before really giving anyone else a chance at your heart.

She also didn't give Tayshia a chance to pick her brain about any of these guys. After all, for as much as Clare was mostly talking to them about Dale, she did have at least some grasp of these guys.

When Jimmy asked if Clare offered up any warnings or heads up about anyone in particular, Tayshia suggested that their paths hadn't even crossed, so there was on real opportunity for that.

"I wish she would have so she could have, like, thrown me a bone and warned me about a guy or two," Tayshia said. That's about as clear an answer as she'd given that there are still fireworks to come.

Considering how unorthodox the season has gone so far, and the emotional state of some of these guys as Tayshia steps in, it seems almost inevitable things could get tense real quick.

When Jimmy asked her which guys, she started to say, "I mean ho--" But she cut herself off before finishing the word "honestly," because it had become poison by then.

At the top of the interview, Jimmy asked her simply when she got the call to be on the show, and she dropped a "to be honest" before telling him that all the days blurred together and blah, blah, blah, so the best she could say was sometime during the summer.

"Interesting that you would be evasive on that question, the simplest of all," he laughed.

She did not offer more clarity from there, though she did say "honest" or "honestly" four more times while offering evasive answers before Jimmy finally called her on it.

"You keep saying honestly, which makes me think you’re lying with every answer to every question," he told her.

She tried to play it off, but it definitely proved her go-to word as she evaded talking about how much she knew about what was going on with Clare before joining the show and even how long she was quarantined.

We're pretty convinced that one was evasiveness, as the show made it seem like she showed up in a day or two at most when we know there's a two-week quarantine period. So unless they had her in their pocket, we suspect there was a production hiatus they're trying really hard to pretend never happened.

"‘Honesetly,’ we went into this interview, I didn’t think you’d be hiding anything. Now I don’t know what’s going on with you," Jimmy told her.

Oh, as for our theory that he doesn't really pay that close of attention to the franchise, we base that on him asking if the guys were quarantining at the same time she was. They'd already been in "The Bachelorette" bubble for a while by then, so they wouldn't need to. She was the newcomer.

Probably the most awkward moment came when he asked Tayshia if she was staying in the same "El Presidente" suite that Clare had been using. "I did move into El Presidente, which is actually, yeah, it’s Tayshia’s Presidente," Tayshia responded.

"Which is the room in which Clare and Dale made sweet love," Jimmy quickly shot back, as seen in Thursday's episode. A lot happened between those two!

"You know, what, when I saw that, I was like, Oh god," Tayshia laughed, presumably having not known that until the episode aired.

"Good thing I saged the place, you know what I mean?" she added. "We got some good juju. Everything was good to go."

It may have been good juju and good to go, but it wasn't all good, because when pressed on that statement she'd made about wishing Clare had been able to give her a heads up about any of the guys, she lost her smile for a moment and said plainly, "Yeah."

And there wasn't an "honestly" in sight. Sounds like there are bumps on her road to love head. That journey will begin playing out Tuesday at 8 p.m. ET on ABC.