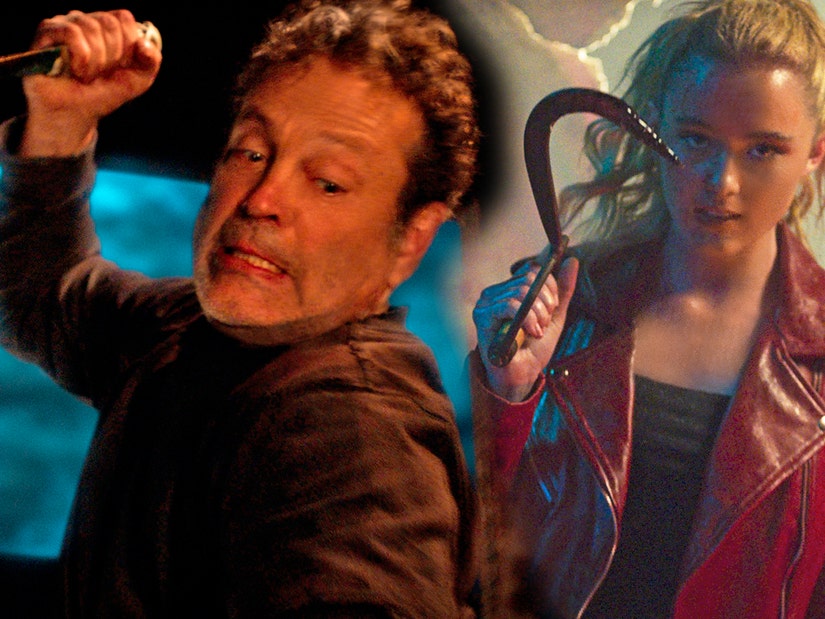 The producer also had to talk one star's agent into letting them do the film.

"Freaky" is filled with gnarly death scenes, bloody chainsaws and some well-deserved F-bombs, but that wasn't necessarily the plan.

While producer Jason Blum said the movie was always intended to be a hard R after it was green lit, he initially hoped he could sway director Christopher Landon into making it a PG-13 film.

Landon had proved he could make a great horror-comedy with the two, PG-13 "Happy Death Day" films he helmed for Blumhouse -- but wanted to up the gore for his next project.

"I did try and endlessly talk him into PG-13, I really did, but I failed," Blum told TooFab. "Chris Landon is one of the few who gets to win that conversation with me. Usually I win, but with Chris, he's built up a lot of good will. Ultimately, he gets to do what he wants to do. He's one of the few that has enough political capital with me and we have an enormous amount of trust in him, so he won that argument on the PG-13."

The R-rating might make it a little harder for some teens to see the high school-set flick, especially as Universal is only initially releasing it in theaters and drive-ins during the pandemic. The move comes after the studio also decided to push back another film with Blumhouse, "Halloween Kills," to Halloween 2021. Blumhouse's other most recent release -- "The Craft: Legacy," distributed by Sony -- went to VOD in October.

Blum said the decisions behind which films get released when and where are "very difficult."

"You talk to the filmmakers and talk to our partners. Usually Universal, sometimes it's Sony and you just try and make the best decision that you can for the movie that you have," he explained. "Sometimes it is the right decision and sometimes it isn't. All you can do is go with your gut and that's what we do, every movie is different." 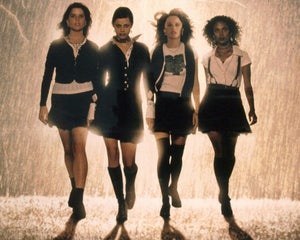 The Craft Spoilers: Cast Spills on THAT Cameo from OG Star (Exclusive)

He added that he was pleased by some of the teen reaction to "The Craft," adding that if he "had to choose the older folks like me or the younger folks, I'd choose the younger folks any day of the week. I'd rather have them like it than old people like me like it."

"Our movies are generally for younger people, that's what our movies are for," he said of the company's goal. "Someday we'll make movies that won't connect with young people and we'll probably go out of business. Right now, that's our business, our business is young people."

For "Freaky," both stars are a draw for that younger audience. Kathryn Newton comes fresh off of Netflix's teen drama "The Society," as well as roles in "Big Little Lies," "Blockers" and "Detective Pikachu" -- while Vince Vaughn is really tapping into his comedic chops once again.

And while both shine in the movie, getting one of them on board for the body-swap film -- which finds Vince's serial killer character trapped inside the body of a teenage girl (Newton) -- took some finessing.

"[Kathryn] was also Chris' first choice and Chris went to her first and she actually initially said no," Blum explained. "And I had a general meeting with her and after the meeting, she wanted to do it and her agent didn't want to do it. I called her agent in the middle of the meeting and said, 'You better have her do this.' And she said yes."

For Blum, he said "the big job of a producer is twisting people's arms" to get his way. Since Kathryn really wanted to do the movie, he said it wasn't "too hard" this time around -- and having some very successful films under Blumhouse's belt goes a long way with attracting other A-list talent.

"'Get Out' helped, the critical acclaim 'Get Out' got made representatives a little more likely to let their clients do our movies," he said. And when it came to Vaughn, he was clearly interested in what the company was churning out.

"I met him a few years ago and he said, 'I'd love to be in a Blumhouse movie,' and I said, 'I'd love to work with you,'" revealed the producer. "This was the first thing we offered him and he was the first person we went to. He said yes and it reminds me of the Vince we all fell in love with 20 years ago. He's one of our best comedians that we have. It's hilarious I think."

Blum added he hopes there's franchise talk for "Freaky" after its release -- and, when asked if the movie is in a shared universe with the "Happy Death Day" films, said, "How about a next film that mixes them both?"

"Freaky" hits theaters on Friday the 13th of November.