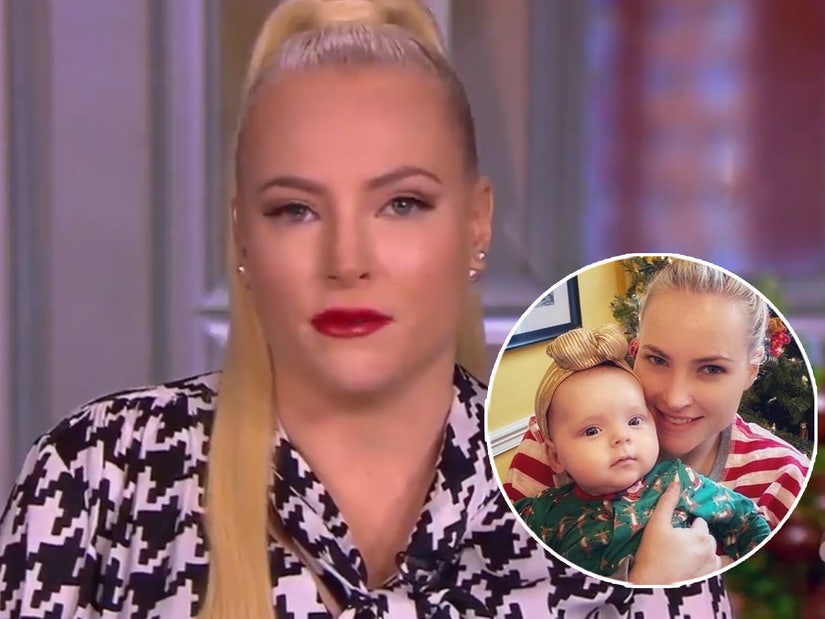 "Maybe it takes personal experience sometimes to get on board," she said as she returned to The View for the first time since giving birth.

Meghan McCain issued a plea to her fellow conservatives on Monday, as she returned to "The View" following the birth of her daughter, Liberty.

The new mom, who welcomed her first child in September 2020, explained how her hiatus from the show made her realize how important paid maternity leave for all moms really is -- and pushed for more Republican support on the issue.

"When I gave birth, I actually had post-natal preeclampsia and I was in the hospital for a week after on a magnesium drip. It really, really kicked my butt," she said. "I was planning on coming back to the show for the election, six weeks after I gave birth, and I was physically unable to. I was physically unable to come. I had to have my husband and mother-in-law help me do everything from shower to eat, it was deeply humbling, to help me take care of Liberty."

Returning to @TheView, @MeghanMcCain calls for mandatory paid maternity leave: "We as conservatives have to come together and allow all women in this country, no matter where they're from or their socioeconomic class, the capacity to have what I just had." https://t.co/f8u2wbJuik pic.twitter.com/kYHk9Z5UV1

As she came to terms with her own privilege, she began to get angry there were women in America who didn't have "the same kind of luxury I have working here at 'The View'" when it comes to time off after giving birth.

"Then I started getting more and more angry that conservatives, in particular -- given we are the party of family values and everything about our ideology stems from the nucleus of the family -- that we are leaving women in this country without the capacity and ability, unless you have an employer that allows you to, to care care of your child, to heal physically."

"I think this is something that's a really dark spot for our country, we're the only developing nation that doesn't supply women with paid family leave," she continued. "If we are going to continue growing as a country ... we as conservatives have to come together and allow all women in this country, no matter where they're from or their socio-economic class, the capacity to have what I just had, which is three months of bonding time and breastfeeding and healing from an emergency C-section."

Saying that "maybe it takes personal experience sometimes to get on board" with an idea, McCain said she hoped every woman on "The View" would help make paid maternity leave an initiative for the show in 2021. She also vowed to hold lawmakers who appeared on the show to the fire on the issue.

While she said it's a topic she believes Democrats and Republicans can come to some kind of agreement on, she explained why she believes it's a harder sell for the right. She believed pushback from conservatives stems from the idea that it would be "more money spent for band-aids that we don't have."

After cohost Sara Haines said she believed men should also get the same amount of time to bond with their children, McCain said she believes it should be a mother issue first ... with perks for dads further down the line.

"We've been fighting for this for years," exclaimed Whoopi Goldberg. "This is as far back as I can remember, people saying, 'Women have babies and you punish us.' Whoever's been pushing back, it's almost as if they've never had kids or they had enough money to allow themselves to have the space we need."

"People need to recognize people are going to have babies, so why not try to help as many parents start off well with their children?" asked Goldberg. "We've been talking about this for 20 years, this was one of Hilary Clinton's big things."

"The Senate this year barely could squeeze out $600 to people who need it," she said, referring to Covid stimulus checks. "What makes you think this is ever gonna happen? I'm sorry Meghan, it's your party, not mine."

McCain, of course, didn't agree completely there -- and said there was "a lot of synergy" on the topic between the two sides.

Monday was Meghan's first appearance back after welcoming daughter Liberty with husband Ben Domenech in September. She also shared the first photos of her baby girl on the show and social media this morning -- see them in the gallery below!