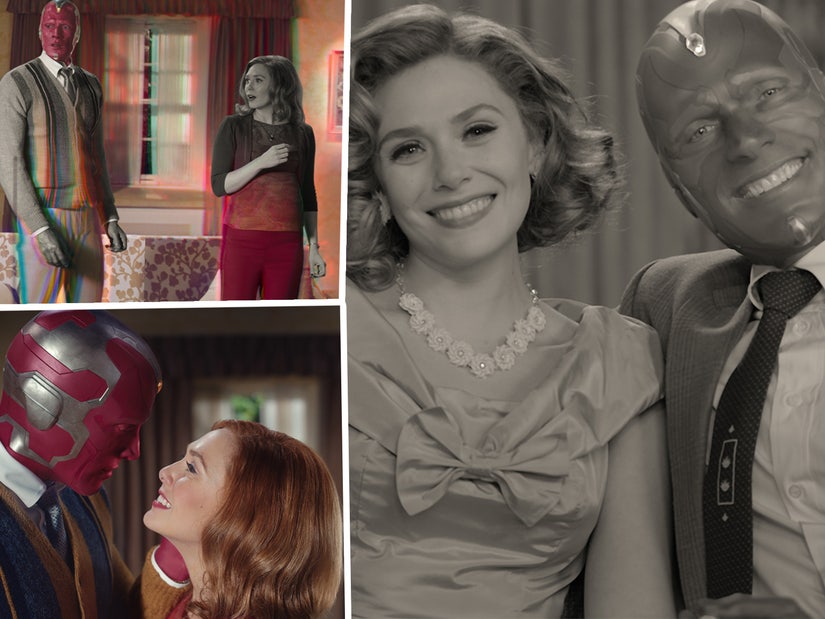 Marvel Studios steps outside of the box with its first Disney+ series.

She gave Thanos a run for his money when they went head-to-head in "Avengers: Endgame," but on "WandaVision," Scarlet Witch faces an even greater challenge: planning a dinner party.

Elizabeth Olsen and Paul Bettany are both back as Wanda and Vision for Marvel Studios' very first show launching on Disney+ later this week. And while its premise boils down to "superhero meets sitcom," the mashup is unlike anything Marvel's done so far ... and all the more interesting because of it.

"Falcon and the Winter Soldier" was supposed to be Marvel Studios' debut series on Disney's streamer, but the pandemic forced a rearrangement. While "WandaVision" is certainly the less-traditional of the two shows, Marvel's head honcho Kevin Feige said he hopes the series tells viewers "to get ready for the new and the different" going forward.

"I hope all of our movies have said that, one after the other over the years, but certainly with the Disney+ opportunities, it has allowed us to expand creatively what we do," he explained during a press conference ahead of the premiere. "I love how bold it is, I love how different it is and I love that it's something you can only see on Disney+. This is very much made to be seen week after week on television, which is very different for us and very fun and as bold as it comes."

Writer Jac Schaeffer noted that the love story between the two characters is beloved, but also tragic. Vision, of course, died during the events of "Infinity War" and his return here will almost certainly play into the over-arching mystery of the season. While their time together has been seen in "stolen moments" of the MCU, the series gave the characters more room to breathe -- and show audiences "all this homebody stuff you'd never get to see a superhero participate in."

Each episode, the two main characters find themselves starring in a sitcom from a different era -- inspired by classics like "I Love Lucy," "Bewitched," "The Dick Van Dyke Show," "The Brady Bunch" and even "Full House," which starred Olsen's twin sisters. Feige and series director Matt Shakman revealed they had lunch with Dick Van Dyke himself to get some insight on sitcoms of the '60s -- while each additional era came with its own research on everything from colloquialisms to visual cues and special effects.

Olsen was amazed to see the SFX team, which "usually blows things up" and "sets things on fire" in the greater MCU, become puppeteers as they relied on old fashioned, practical ways to make everyday household items float. "It was so incredible to watch them adapt to the era-specific ways of creative practical effects," she added, "I'm used to it all coming together with CGI, it was really fun to have a practical effect there."

Filming the first episode in front of an actual live-studio audience also "totally confused [Olsen's] brain," she admitted. "It was so nerve wracking, there was a lot of adrenaline ... the idea of not playing to an audience, but feeling off an audience, but having a camera. I was really grateful when we added the fourth wall."

Of course, "WandaVision" isn't just your standard sitcom with superheroes in it. There's a greater mystery at play as to why these characters are time traveling through TV history, with hints sprinkled throughout that there's an outside world interfering somehow. For those glimpses at something sinister, the creators turned to "The Twilight Zone" for inspiration.

"That's kind of how I learned how to tell stories," Schaeffer said of the sci-fi series, "and it was so incredibly deft at that turn, where you think you're in one thing and suddenly its flipped on its head."

The series also serves as Teyonah Parris' MCU debut, as she joins the show as Monica Rambeau -- a character who first appeared as a child in "Captain Marvel." According to Parris, "WandaVision" will explain "who she is now as a grown woman, what's happened to her and how she's grown and evolved ... or not."

She added that her character has "definitely been through some things and seen some things" since we last saw her in the '80s. "We do get to learn particularly what those things are that Monica has seen and gone through and how they have shaped her life," said Parris. "I don't want to give too much away, but we will touch on that a lot as we go through the show."

Watch it all unfold when "WandaVision" debuts Friday, January 15 on Disney+.