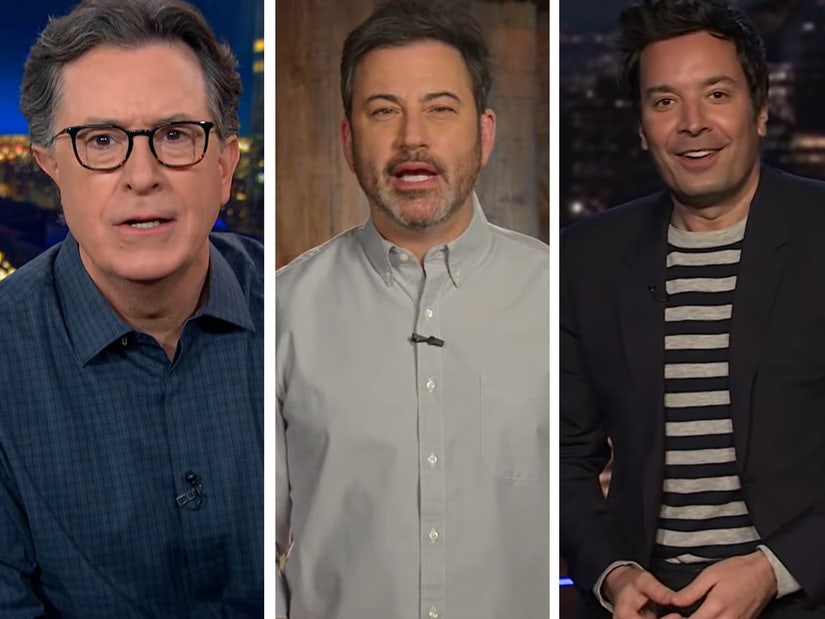 "Two impeachments and just like Trump's sons, the second one is the most embarrassing."

President Donald Trump made history for all the wrong reasons on Wednesday -- and it was the talk of the town all across late night TV last night.

Earlier in the day, the House of Representatives voted 232-197 in favor — including ten Republicans — of impeachment, making him the first ever POTUS to be impeached twice.

The news led to quite a few sequel jokes across the late night landscape, as each of the hosts reacted to the latest update with jokes at the expense of Trump and his Republican supporters.

"I feel like I just took down my decorations from the last impeachment!" exclaimed Stephen Colbert at the top of his opening monologue.

"Today's vote is historic, because for the first time a president has been impeached twice," he continued. "Makes sense, this president loves having seconds. Also, he's a traitor. Also, this man had an appetite ... for the destruction of our institutions."

Colbert then joked, "Do you know how bad of a job you're doing to get fired while you're getting fired?" before taking aim at Senate majority leader Mitch McConnell.

"Reportedly, McConnell has told associates in private that he believes the president committed impeachable offenses and is leaning toward convicting him," said Colbert. "It's all going to be in his memoir, 'Leaning Toward Courage.'"

Also repeating the stat that Trump is the first US president to be impeached twice, Jimmy Kimmel asked, "I wonder if he's tired of all the winning yet."

"It's always a surprise to see how crazy some of our elected officials are and that was fully on display today as they supported the sad, orange man," he continued, before showing footage of Trump's supporters, some of whom compared the siege on the Capitol to Black Lives Matter protests from 2020.

"Pushing this idea that the attack on the Capitol bore any resemblance to the BLM protests over the summer, it's not just dumb, it's disgusting," said Kimmel. "Stop comparing protestors marching to protect their rights to anarchists storming an election to strip us of ours. Stop it, you sound stupid."

Calling McConnell "100% complicit" in the violence in Capitol Hill, he added, "McConnell is reported to be happy that the impeachment is happening, because he thinks it'll be a good way for Republicans to get Trump out of their hairpieces."

Jimmy Fallon kept the sequel cracks coming over on The Tonight Show.

"The House voted to impeach Donald Trump for a second time and like always, the sequel was a worse than the original," he joked. "I know a lot of people are like, will I be able to follow the second impeachment if I missed the first? Yeah, same characters, different plot."

Saying Trump had "basically made a pandemic sandwich with impeachment bread" out of his time as president, Fallon said POTUS didn't care about the vote -- "he's just wondering how soon he can start selling second impeachment commemorative coins."

Of the bipartisan support for impeachment, he added, "Well, it took them four years, but Trump finally figured out a way to unite Republicans and Democrats."

"Yep, 10 Republicans finally broke away from the president," he continued. "Trump was so mad he started typing angry tweets about them on a calculator."

Remarking on the second impeachment, James Corden joked, "I hope Trump supporters don't suddenly become angry and volatile about this."

"So much has gone on, I don't remember what he was impeached for the first time," he added. "Two impeachments and just like Trump's sons, the second one is the most embarrassing."

"Mitch McConnell has turned his back on Trump, which means someone should probably help him because usually when Mitch McConnell flips on his back, it’s hard for him to get back up on the right side again," he joked, before showing a photo of the Senate majority leader smiling.

"Now this all seems promising, I know, but watch out, because there is actually nothing more disturbing than the sight of a pleased Mitch McConnell."

"Twice! Man, this guy is hard to get rid of," joked Seth Meyers at the top of his show. "He's like a red wine stain on a white rug, we're going to have to just get rid of the whole rug."

Remarking on the entire situation, Meyers added, "If you had told me this four years, I think would have said, 'Uh huh, of course ... Wait, it's gonna take four years?!"

He then turned his attention to Pence as well and his decision against invoking the 25th Amendment.

"Vice President Mike Pence rejected the request for him to invoke the 25th Amendment and remove President Trump from office," he added. "'I do not support it in any way,' said Pence's spine about his body."

To see how more in Hollywood reacted to the historic moment, check out the article below.