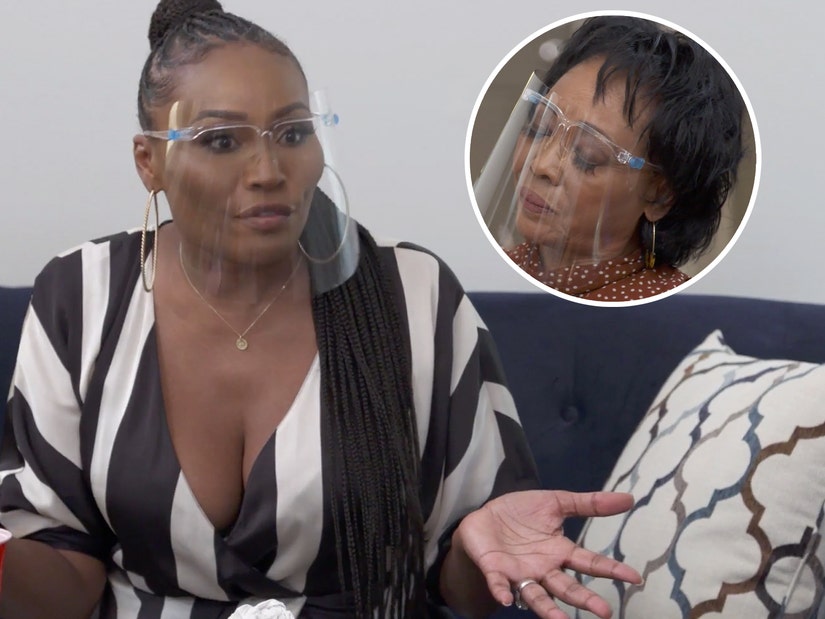 The RHOA star asked her mother how she felt about her father being invited to her wedding.

"Real Housewives of Atlanta" star Cynthia Bailey found herself caught between her parents while planning her wedding to Mike Hill.

On Sunday's new episode of the Bravo series, the couple was seen putting the finishing touches on their invitations list when Cynthia said that all of her family members had confirmed their attendance, except for her father, who she had yet to invite.

She explained that she needed to talk to her mother Barbara first before extending him an invitation, noting the "complicated" situation between them all. "Our relationship is strained because I told you what happened with the whole Kenya PSA," she said, referring to Cynthia and her mom's appearance in a domestic violence PSA with Kenya Moore.

"After my mom did Kenya's domestic violence PSA, it caused a huge rift in my relationship with my dad," explained Bailey, whose dad and brother walked her down the aisle for her first wedding to Peter Thomas.

"My dad lives in Alabama and the last time I saw my dad was a couple years ago," she added. "Although I don't have the closest relationship with my dad, he's not gonna be here forever. I at least want to give him the option."

Mike, who had never met Cynthia's father, said Bailey should focus on who she wants at the wedding -- regardless of how other people may feel. She, however, felt her mother had done enough to "earn the right" to have the final say.

Later in the hour, Bailey went to see her mother, bringing daughter Noelle and sister Malorie as backup. Barbara's response when Cynthia asked how she felt about her ex-husband attending the ceremony: "I'll just put my mask over my eyes."

While Cynthia's mom said she didn't "hate" her ex, she didn't "like the way that he treated me when I was younger, trying to get child support and you all."

She also told her daughter that she felt blindsided by the PSA, claiming she didn't understand what she was really doing when she spoke out about their relationship in such a public way. "That really hurt me. You shouldn't have done that, you should have told me what that thing was about," she told Cynthia. "I didn't know what in the world it meant."

Bailey said she just assumed her mother knew what she was doing, and "would never in a million years" put her in a position in which she felt uncomfortable.

"You can invite him, I don't care," Barbara then said, but Noelle knew she was just being passive aggressive. "She always puts every single one of us first," interjected Cynthia's daughter, "So why not put her first this one time?"

"I'm good with it. I have what I need to move forward," replied Cynthia, as Noelle said, "I feel like it's clear what needs to happen."

The domestic violence PSA aired back in 2018, with both Bailey and her mother appearing in it.