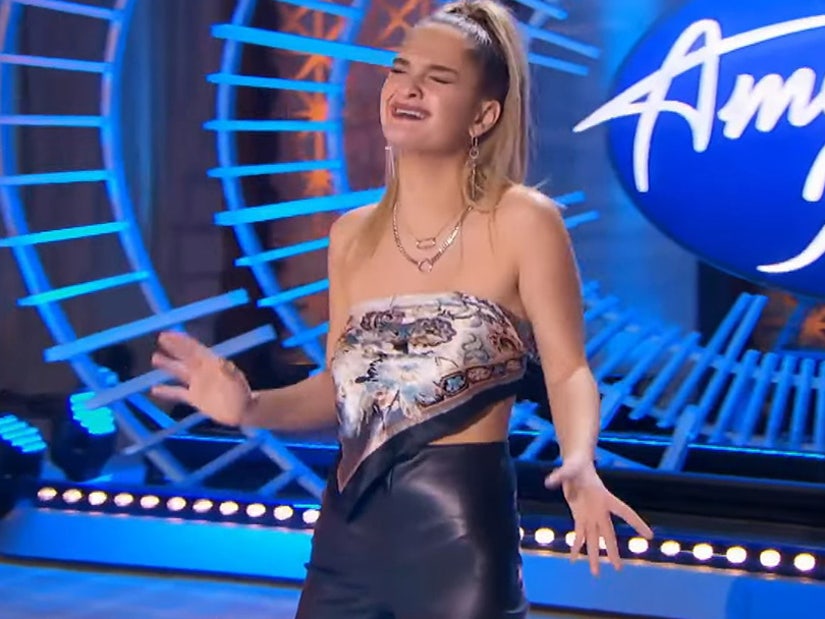 ABC gets criticized on social media after Kellyanne and George Conway's daughter gets a ticket to Hollywood.

Katy Perry wasn't quite sure what to think of the daughter of George and Kellyanne Conway when 16-year-old Claudia first walked in for her "American Idol" audition on Sunday's episode -- but viewers knew they didn't like what they saw.

Claudia gained fame as an influencer in large part due to her famous lineage -- and her very public, social media feuds with Donald Trump's former counselor AKA her own mother. During her audition, the teen walked in giggling and smiling and greeting the judges, only to be met with, "Are you okay?"

While Kellyanne was not able to attend -- probably because she's way too recognizable and was pretty busy around the time the audition taped -- George was by his daughter's side, lending his support just as he supports anyone opposed to Donald Trump.

"This is your time to shine," her mother told her in a video chat before Claudia's audition. It was an odd pep talk, with Kellyanne telling her she should be nervous and that "winners are people who are willing to lose."

Claudia then talked extensively about her life growing up in the spotlight and in the shadow of the Trump Administration, while also attempting to find her own voice, which she finally did via social media. She also emphasized -- after Katy asked if her mother hugged her -- that she and her mom love one another. This was filmed, of course, before the infamous incident that finally drove Claudia off of social media (where her mother posted a topless pic of her to her own Twitter).

The family has since come together, with Claudia saying she believes her mother would never do such a thing intentionally. She also said she was taking a break from social media, as TMZ reports law enforcement says an investigation is under way.

As for her actual audition, Claudia took on a lofty challenge, tackling Rihanna's "Love on the Brain" before Katy stopped her and pushed her into her second song. Even Claudia had to admit she lost her way on that one -- before tackling Adele's "When We Were Young."

Perry and Lionel Richie were on board with Conway, with Katy telling her, "Claudia, you're not going to D.C., honey, you're going straight to Hollywood" -- but those watching at home weren't exactly thrilled. Many felt the show was exploiting a teenager for viewers and called them out on it on social media.

Below are some of the most popular tweets criticizing Conway's appearance and what some saw as a way for Kellyanne to rehab her image after working for Trump.

Now that they’ve helped rehab mendacious behemoths like Kellyanne Conway and Sean Spicer it’s only a matter of time before ABC casts the QAnon shaman as the next Bachelor https://t.co/t3a3QqDqFO

Good work by American Idol in their efforts to rehab the reputation of horrible human ⁦⁦@KellyannePolls⁩ pic.twitter.com/Bkauu4zWON

You know how we've been having a reckoning w/media treatment of Britney and countless other young women in the 90s? And we've been reliving horrific interviews, sick to our stomach?

Katy Perry saying “honey, you’re not going to DC, you’re going to Hollywood!” to Claudia Conway on American Idol at the conclusion of her audition is almost dystopian at this point

I can't put into words why, but something about Claudia Conway on American Idol fresh off highly publicized family drama and mental breakdown feels viscerally wrong to me, my body physically rejects the entire premise

American Idol is gross for allowing an abusive creature like Kellyanne Conway to rehab her image on the show, and using Claudia Conway's pain to make a quick buck.

Before y’all bully her, let me remind you Claudia Conway is 16-years-old.

I wanted to be happy for Claudia Conway to be on American Idol, but to see the show using her abusive family dynamics to get attention to the show is just pic.twitter.com/l0it9CXE8F

Do any of those kids that Kellyanne Conway helped lock up in cages get a chance to be on ‘American Idol’?

This. This is what you get when you don’t hold seditionists, insurrectionists and white supremacists accountable:

They remake their image and re-enter polite society through singing competitions on prime-time network TV. https://t.co/3zWjLJXdgz

Kellyanne on American Idol, Sarah Palin on The Masked Singer, Sean Spicer on Dancing with the Stars — dystopia is what happens when we "reach across the aisle" with white supremacists instead of holding them accountable

To anyone who ever had any doubt that the Trump people would be quickly rehabilitated, their records whitewashed, in a matter of weeks, not months, or years, #Kellyanne is trending.

Thanks ABC and American Idol. Thanks a lot.