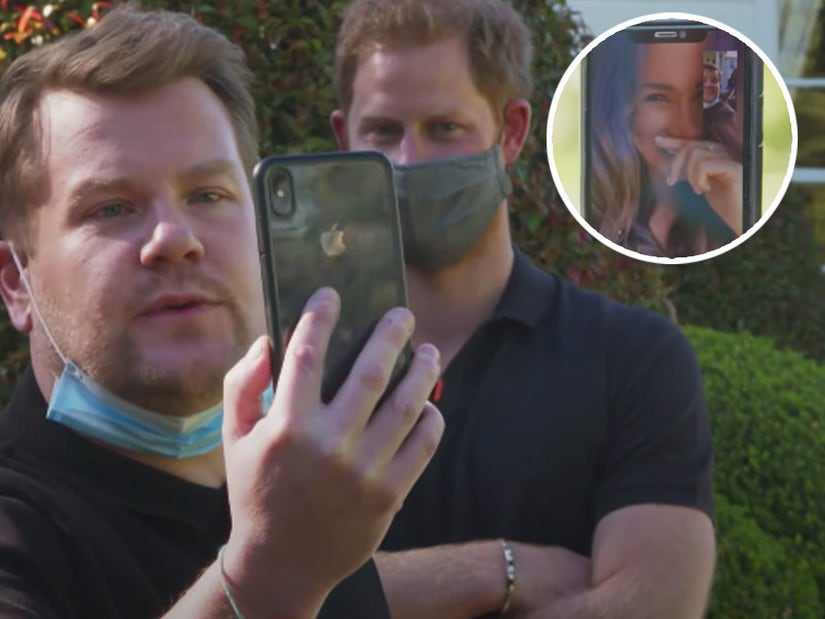 Harry also opens up about Archie's first words, raps the Fresh Prince theme song and reveals the unique gift the Queen gave his son for Christmas.

While James Corden gave Prince Harry a glimpse at some Hollywood landmarks on "The Late Late Show" last night, viewers at home got a look into the royal's life as well -- as he opened up about what it's really like for him and his wife, Meghan Markle.

Following his move to Santa Barbara, California and their decision to step back from royal duties, Corden thought it was time to show Harry around town on a tour bus -- Harry's very first time on an open-air bus, ever. At one point, they stopped at the home from "The Fresh Prince of Bel-Air," where Harry rapped some of the lyrics from the theme song before he and James introduced themselves to the owners.

After asking whether they could buy the home from them, so Harry himself could become the "Fresh Prince" himself, he and James decided to FaceTime with Meghan. "Haz, how is your tour of L.A. going?" she asked, revealing her personal nickname for her other half.

Once back on the bus, Harry explained when he knew Meghan was the one.

"On the second date I was starting to think, 'Wow, this is pretty special,'" he recalled. "It was the way we hit it off with each other and we were just so comfortable in each other’s company."

"Dating with me, or with any member of the royal family I guess, is kind of flipped upside down. All of the dates become dinners or watching the TV or chatting, at home. And then eventually once you become a couple, then you venture out to dinners, to the cinema, and everything else," he continued. "So everything was done back to front with us. So actually, we got to spend an enormous amount of time just the two of us, rather than going to friends' houses or out to dinner, where there are other distractions. There were no distractions and that was great. It was an amazing thing. We went from zero to 60 in the first two months."

He said that a normal night-in for the two consists of giving their son Archie a bath, reading him a book and putting him to bed. "Meg might cook a meal, might order takeaway, go upstairs, sit in bed, turn the TV on, watch some 'Jeopardy,' maybe watch a little bit of Netflix," he added. 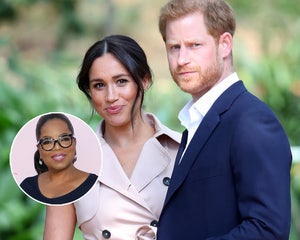 Talking more about Archie, Harry said the tot is "hysterical" and has "the most amazing personality." The proud dad said the boy was already "putting three, four words together" and is "already singing songs." His first word: "Crocodile."

"My grandmother asked us what Archie wanted for Christmas and Meg said a waffle maker," he continued. "She sent us a waffle maker for Archie. So for breakfast now, Meg makes up a beautiful, organic mix in the waffle maker, flip it, out it comes, he loves it."

He also said the two often Zoom with both the Queen and Prince Phillip, before Corden asked about his family's decision to step away from their royal duties.

"It was never walking away. It was stepping back, rather than stepping down," he explained. "You know, it was a really difficult environment, as I think a lot of people saw. We all know what the British press can be like and it was destroying my mental health. I was like, 'This is toxic.' So I did what any husband and what any father would do, it like, 'I need to get my family out of here.'"

"But we never walked away. And as far as I'm concerned, whatever decisions are made on that side, I will never walk away," he continued. "I will always be contributing, but my life is public service, so wherever I am in the world, it's going to be the same thing."

He also addressed Netflix's Emmy Award-winning series "The Crown," making it pretty clear he doesn't have a problem with the series -- especially when you compare it to how the media covers his family.

"They don't pretend to be news. It's fictional, but it's loosely based on the truth ... It gives you a rough idea of what that lifestyle, what the pressures of putting duty and service above family and everything else, what can come from that," he explained. "I'm way more comfortable with 'The Crown' than I am seeing the stories written about my family, or my wife, or myself. It's the difference between… that is obviously fiction, take it how you will, but this is being reported on as fact because you're supposedly news. I have a real issue with that."

He also revealed who he'd like to step into his shoes should the series ever cast an adult version of himself: "Homeland" star Damien Lewis. 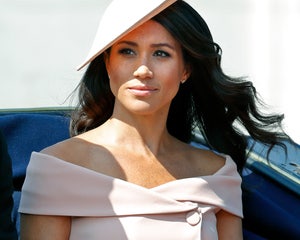