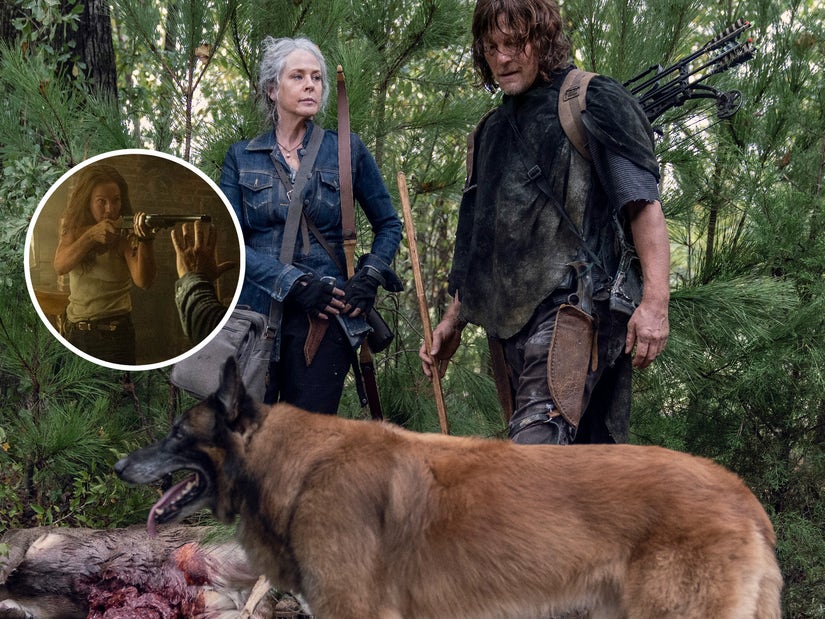 Viewers also learned Daryl got close with another woman after Rick's disappearance ... and how he wound up with Dog.

Sunday's new episode of "The Walking Dead" can't have been an easy one for "Caryl" shippers, as yet another love interest was introduced for Daryl and the wedge between him and Carol got even deeper.

Throughout the series, Carol (Melissa McBride) has either run from problems or fiercely (sometimes recklessly) tackled them head-on. Daryl (Norman Reedus), meanwhile, always blames himself whenever the going gets tough. Tonight, both of them called the other out on some of their more problematic tendencies and it didn't end well. 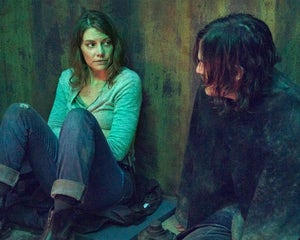 The new hour flashed back and forth between Carol and Daryl in the present, following the Whisperers' attack on Alexandria, and Daryl's days living solo in the woods after Rick's disappearance. In the present, things between them were icy, to say the least.

Carol was in another of her pessimistic moods, saying she felt like their luck as a group may have finally run out. "Losing Alexandria ... it feels different," she said, "Like everything that's good in the world is not on our side anymore." While Daryl said they could rebuild, she echoed a lot of viewers' criticisms of the show by saying it would only be a matter of time until someone else came around to mess it all up again.

"This world, the dead, it's gonna catch up to us eventually," she told him, as he said that would only happen "if we let it."

Eventually, the two came across an abandoned cabin in the woods -- a cabin Dog used to call home with his original mom, a woman named Leah (Lynn Collins). In a series of flashbacks, viewers learned Daryl initially clashed with Leah, as the both of them just wanted to be left alone to deal with their respective traumas. He felt responsible for Rick's disappearance and wanted to find him ... she was in mourning after losing her surrogate son to a walker attack.

Over time, the ice between them began to thaw as they continued to run into each other in the same patch of woods. The two eventually bonded over losing people who may not have been blood relatives but were definitely family and, it seems, started a romantic attachment to each other. After a few months, however, it all began to fall apart -- as Daryl couldn't make up his mind about where he felt he belonged.

While it seemed like he chose to be out on his own, a visit from Carol -- who had been checking in on him the entire time he lived in the woods -- made him realize that being with Leah was his version of moving on with his life and finding peace. With that, he went running back to the cabin, only to find her gone, the place in disarray and Dog there alone. He left behind a note reading, "I belong with you. FIND ME."

Of course, that never happened. Daryl became Dog's new dad and Leah wasn't seen again ... for now, at least. She's totally going to pop back up at some point in the current timeline, isn't she? Was she kidnapped? Did she head to the Commonwealth? We'll see.

In the present, it becomes clear that Carol knew a little about Leah, but not everything. Daryl explained that he, again, felt responsible for her disappearance and he should have been there to help her.

"Stop thinking every time you lose someone, it's because of you, something you did wrong," Carol told him. "We all make mistakes. Losing Leah, that's not on you. Neither is Rick, or Connie."

"No, that's on you. Because you never know when to stop," Daryl then hit back, reminding us all that Connie went MIA because Carol stopped at nothing to try and kill Alpha. "I'm sorry for Connie," she replied, "but I'm not sorry for going after the horde and I'm not sorry for making Alpha pay for killing Henry, because I was right."

She then asked him to "say what you wanna say," as the two continued to lay everything on the table. "I don't need a savior Daryl and I don't need a martyr, I just need a friend," she added.

"Friends don't have the same damn conversation over and over again. I'm sick of it," he replied, again echoing the thoughts of many viewers who have seen this cycle play out a few times between them already.

The hour ended with the two more split than ever before, as Daryl said he should have never stopped Carol from trying to run away from the other survivors in the past -- and vowing to do the opposite if that happened again. "Our luck's run out, you and me," said Carol, repeating her comments from the top of the episode.

Of course, we all know this drama is only temporary, as Daryl and Carol will be starring on their own spinoff show together. Viewers also know Connie is very much alive, so some of that resentment will surely go away once they learn she's among the living and not one of the walking dead.

The six bonus episodes of "The Walking Dead" Season 10 continue Sundays on AMC.