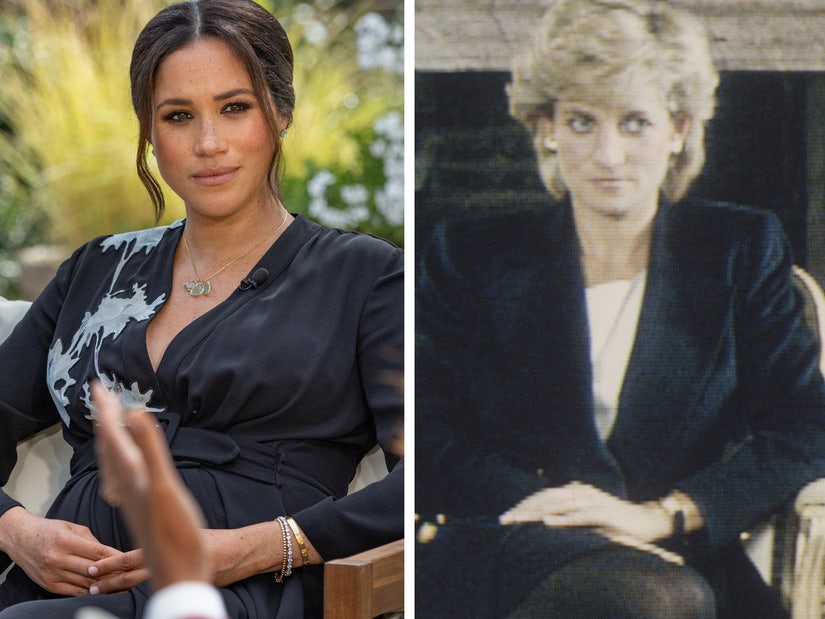 Diana believed many in the royal household viewed her "as a threat of some kind."

Meghan Markle's interview with Oprah Winfrey not only referenced a famous sit-down Diana, Princess of Wales did back in 1995 -- but also drew many comparisons to it from those watching at home.

During her separation from Prince Charles, Princess Diana did a tell-all interview with British journalist Martin Bashir, in which she detailed the hardships she faced from within the royal establishment, her own mental health struggles and reacted to the negative press she received after marrying into the family. She also broke from tradition by speaking out, in an effort to regain control of the narrative around her life. Sound familiar?

The "Panorama" interview was a watershed moment in pop culture and royal history, with Diana claiming she didn't get the support she thought she'd have after tying the knot with Charles. "At the age of 19, you always think you're prepared for everything and you think you have the knowledge of what's coming ahead," she said, "But although I was daunted at the prospect at the time, I felt I had the support of my husband-to-be."

She also said nobody sat her down and really explained what she was marrying into, saying it was up to her to learn everything on the fly. Diana went on to call the negative press attention aimed at her especially "isolating."

During Meghan's interview, she admitted she didn't "fully understand" what she was getting herself into or what would be required of her once she and Prince Harry started dating. She explained how she wound up Googling the national anthem on her own and learned how to curtsy just moments before meeting the Queen for the first time. She also said her biggest regret was believing the institution would "protect" her, when that wasn't the case at all.

For Markle, much of the press coverage she received wasn't just negative and twisted, but also racist. She said that her time in the UK was isolating and lonely, so much so that she had suicidal thoughts. Even when at her lowest, she had royal obligations to fulfill and appearances to make -- admitting she went to one event because she worried about what she would do if Harry left her alone.

Diana also spoke about her mental health issues during her interview with Bashir, detailing her battle with postpartum depression and bulimia. Despite her mental health decline, she said she still felt "compelled to go out and do engagements" because she didn't want to let her supporters down.

I just know that Diana would be incredibly proud of her son and his family #HarryandMeghanonOprah pic.twitter.com/QkHaEnt5pL

At one point in the interview, in a clip that has gone viral following Markle's sit-down, Diana was asked whether she thought she'd ever be queen.

"No I don't, no. I'd like to be a queen of people's hearts, but I don't see myself being queen of this country. I don't think many people will want me to be queen," she said. "Actually, when I say many people, I mean the establishment that I'm married into. Because they've decided that I'm a non-starter."

"Because I do things differently, because I don't go by a rule book, because I lead from the heart, not the head, and albeit that's gotten me into trouble in my work, I understand that," she continued. "But someone's gotta go out there and love people and show it."

After she said she didn't feel like she had a lot of supporters in the royal household, Diana added she believed many of them saw her "as a threat of some kind."

"I'm here to do good. I'm not a destructive person. I think every strong woman in history's had to walk down a similar path and I think it's the strength that causes the confusion and fear," she continued. "Why is she strong? Where does she get it from? Where is she taking it? Where is she going to use it? Why do the public still support her? When I say public, you go and do an engagement and there's a great many people there." 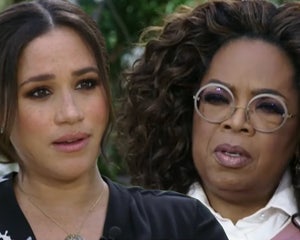 While Harry said his family was initially really welcoming to Meghan, "it all changed" after the two did a tour of Australia together. "It was the first time the family got to see how incredible she was at the job and that brought back memories," he said, alluding to his mother's similar tour down under.

Harry implied there was some jealously within his family after everyone saw how effortlessly Meghan handled herself in the public eye. "I just wish that we would all learn from the past," he said, noting that Meghan's assimilation into the family and her duties should have been seen as a positive, but wasn't.

At one point, Oprah did ask Harry what he thought his late mother would think of everything they've gone through in the past couple years.

"I think she would feel very angry with how this has panned out and very sad, but ultimately, all she'd ever want is for us to be happy," he said. "I think she saw it coming. I certainly felt her presence throughout this whole process."

"I'm just really relieved and happy to be sitting here, talking to you with my wife by my side because I can't begin to imagine what it must've been like for [my mother] going through this process by herself all those years ago," he added. "My biggest concern was history repeating itself."

Shortly after the interview aired, the Queen ordered Diana and Charles to divorce, which they finalized in 1996. Though they officially split, the public scrutiny around Diana never ceased -- and she died alongside boyfriend Dodi Fayed in a car crash in 1997, while her driver fled from the paparazzi. 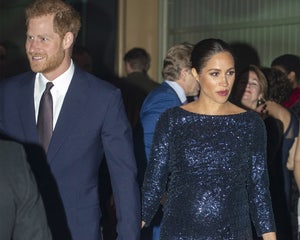