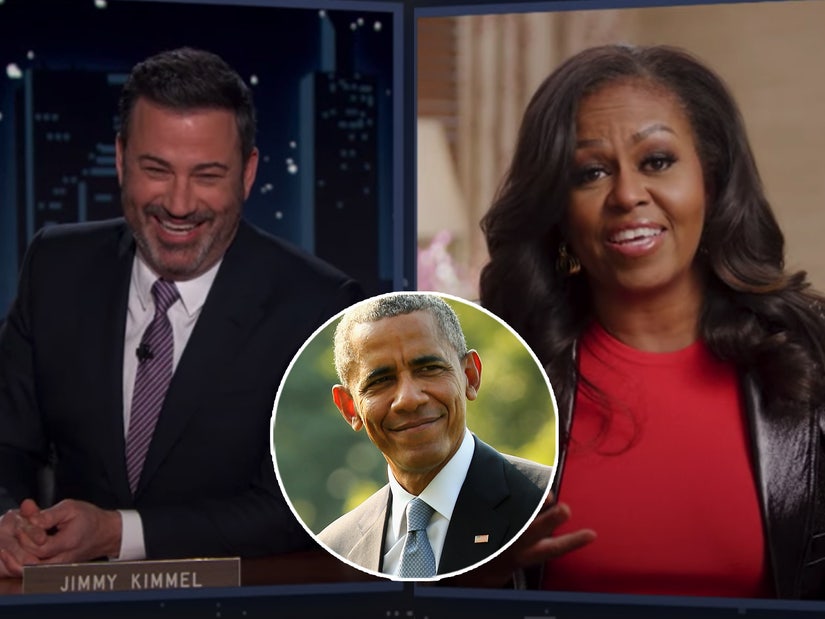 "No one in the history of all of the conversations I've had, has anybody ever drilled down on this particular point like you."

Jimmy Kimmel is determined to find out what -- if anything -- went down in the Obamas' bedroom the night SEAL Team 6 took down Osama bin Laden.

But Michelle Obama is not playing that game.

During an appearance on his show, the former first lady was asked whether she and the president "made love that night to celebrate" -- something he first asked her during a book tour stop back in 2019. She sidestepped the question at the time, before he asked Barack Obama the same question in 2020. "I suspect that she was asleep because the truth of the matter is, most of the time, by the time I was done working, she'd be snoozing," he said.

Clearly not satisfied with that answer, Kimmel posed the question to her again on Tuesday night.

"You know, I have to tell your audience that, for some very sick reason, you are very obsessed with this portion of that major historical event," she replied, as he admitted that, "yes," he was.

"In a way that no one else, no one, in the history of all of the conversations I've had, has anybody ever drilled down on this particular point like you, Jimmy Kimmel," she continued. "So I turn that back on you. That's what you wanna know, you're still that little boy in your bedroom, under the cover with the flashlight, going, 'I hope nobody sees me.'"

"I'm still pleading the fifth," she added ... and that was that.

During the conversation, the two also talked about what life has been like for the Obamas in lockdown.

"If we have our health, we're doing well, but we are blessed," she said, noting that they have been together "for a very long time."

"It was fun for a long time," she explained, saying everyone would do their own thing during the day before coming together for "cocktail hour" and puzzle time in the evening. "I think that lasted for a month or so and then, you know, the kids would come down later, be a little more surly, little less communicative, ran out of funny stories to tell. Then summer came and that helped, so we could eat outside. Now, a year in, we don't even get a hello."

The interview ended with Michelle trying to convince Jimmy's 6-year-old daughter Jane to add more vegetables to her diet ... something she did not want to do. "This was an epic fail," Obama admitted after the tot would just not give in.

Watch her hilarious attempt above!