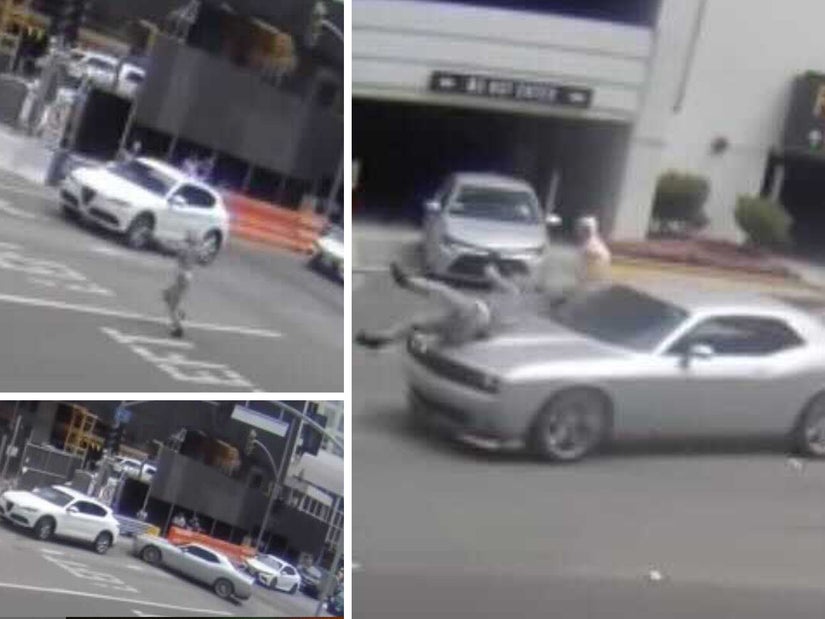 It was just one of five 'follow-home' robberies in 48 hours.

A woman fell victim to a car break in, a hit and run and a robbery in Downtown LA on Monday — all in a matter of seconds

This week, LAPD warned of the rise of a number of so-called 'follow-home' gangs operating in the city, and on Tuesday shared security footage of the most brazen one yet.

The attack occurred just after noon; the victim had just left a jewelry store in the Jewelry District of Downtown Los Angeles, when a silver colored Dodge Challenger began following her. 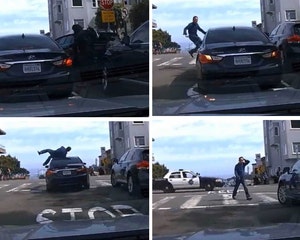 As the she approached the intersection of 8th Street and Francisco Street, a man jumped out of the Challenger, ran up to her car and smashed her driver-side window with a tool.

The terrified woman tried to drive away, but traffic was too heavy; she abandoned her car and fled westbound on 8th Street, seeking help.

But the thieves weren't after her car. As she doubled back toward Francisco Street, the suspects continued to chase her in their car.

The shocking video shows the woman desperately running in front of traffic, trying to flag down a passing car for help, and put the car between her and her pursuers. But the white car just speeds off.

That's when the Challenger accelerates and rams into the woman, sending her sprawling over the hood and onto the street.

A Good Samaritan who witnessed on the far side of the street appears to run over and try to aid the woman — but backs off when the two suspects leap from the car, one armed with a handgun.

Meanwhile, the female victim quickly pulls off her watch and tosses it to the ground; the thief grabs it before jumping back in the car and speeding away. The witness immediately runs over to help the victim from the street.

"He was the only person who tried to help the woman," one investigating officer told TooFab of the Good Samaritan. "In my opinion, he's a hero."

Luckily, the victim only sustained minor injuries, and was treated by paramedics at the scene. 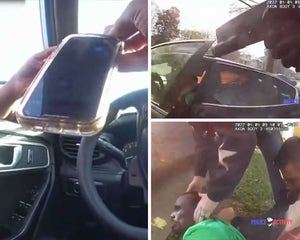 "Suspect 1 is described as a male, standing 5 feet 11 inches tall, wearing a black hooded sweatshirt, black sweatpants, white shoes, and a full ski mask. He was armed with a semi-automatic handgun," LAPD said in its release.

"Suspect 2 is described as a male wearing a black sweater, light blue jeans, and armed with a handgun."

The incident was just one of five follow-home robberies reported to LAPD in that 48 hour period, the police commission was told on Tuesday, per ABC7.

The phenomenon — which was "almost unheard of" before last year — sees armed suspects following victims leaving shopping areas such as Melrose Avenue and the Jewelry District, and striking when they return to their cars or homes.

"In my 34 years in the LAPD, I have never seen this type of criminal behavior in such large groups coordinating to conduct attacks on unsuspecting citizens to take their property and/or vehicles,'' said Captain Jonathan Tippet, who leads the task force set up to tackle them.

The Follow Home Robbery Task Force, which boasts 18 detectives, was established in November of last year, after police recognized a pattern of 51 "violent, armed robberies" occurring in the two months prior.

They believe there are a total of 17 separate gangs, though they are not working together as many of them are rivals. 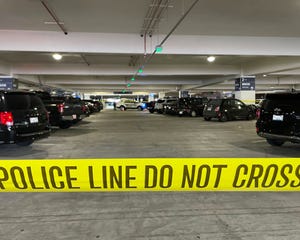 Utah Man Runs Over and Kills Wife in Airport Parking Garage After Returning From Vacation: Police