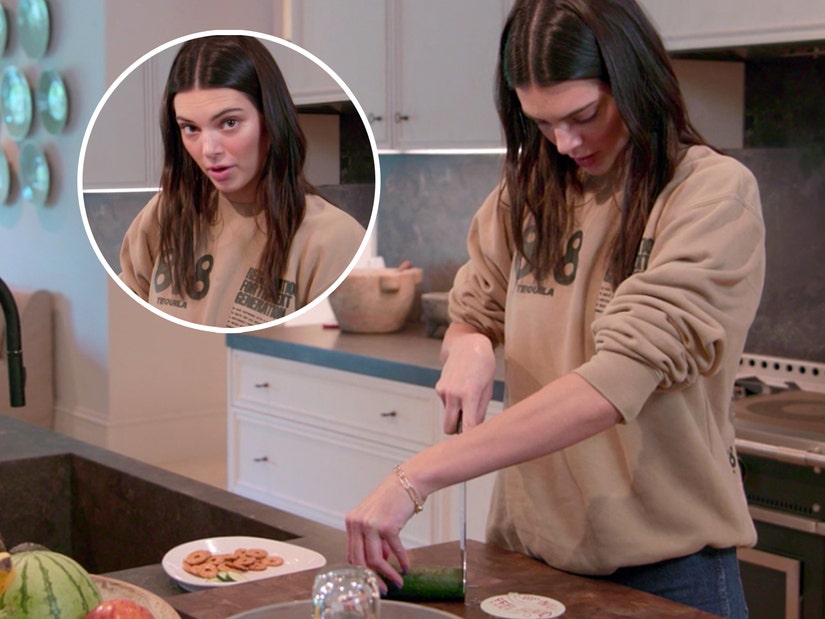 Kris was clearly concerned, as she called for her chef to come help

Kendall Jenner tried to make herself a snack on the latest episode of "The Kardashians" ... and got roasted in the process.

Toward the end of the new hour, Kendall swung by mom Kris Jenner's new home and, before getting into a massive fight with Scott Disick, decided to prepare herself a little treat.

"Do you want the chef to make you a snack?" asked Kris, before Kendall took some initiative and said she'd make it herself. "I'm just gonna chop up some cucumber. It's pretty easy," she declared, before her mom said, "You go girl" and warned her about nicking herself with the knife.

"I'm kinda scared ... I definitely am not a good cutter, don't zoom in on me. I'm not professional whatsoever," she added, as the camera focused on her bizarre hand placement while chopping up the vegetable. Kris was clearly concerned, as she called for her chef to come help ... but Kendall was determined to do finish the job.

That's all we saw of Jenner's knife skills ... or serious lack thereof ... but TikTok and Twitter had a field day with the brief clip and instantly began mocking her.

One TikTok user posted the clip to their page, before then demonstrating just how ridiculous Kendall looked -- along with the caption, "I am screaming."

The comments on the video were flooded with more mockery for Kendall. "'It's pretty easy' then chops it the weirdest way possible," read one, while another viewer wrote, "always knew they were so far removed from reality but watching Kendall try to cut that cucumber was painful."

"If this is real, I'm concerned," said another. "I feel like Paris Hilton walked so Kendall could run with this stuff," posted another viewer.

Over on Twitter, there was even more chatter -- and eventually, Jenner herself reacted admitted the whole thing was "tragic."

Check out some of the best tweets below:

Obsessed with Kendall Jenner trying to prove she’s not an out of touch spoiled rich girl by insisting on making her own snack and almost dislocating her shoulder trying to slice a cucumber.

Kendall Jenner trying to cut a fcking cucumber is the most tragic thing I’ve ever witnessed #TheKardashians pic.twitter.com/QNoJMHXzJD

i’m sorry but kendall jenner not being able to cut a mf cucumber 😭😭😭 the level of privilege to be in your mid/late 20s and not know how to properly cut a vegetable !!!!!! AND THEY PUT IT IN THE EPISODE !!!!

About an hour ago, I witnessed Kendall Jenner attempt to cut a cucumber on my tv screen. It made me feel a little superior but mostly poor.