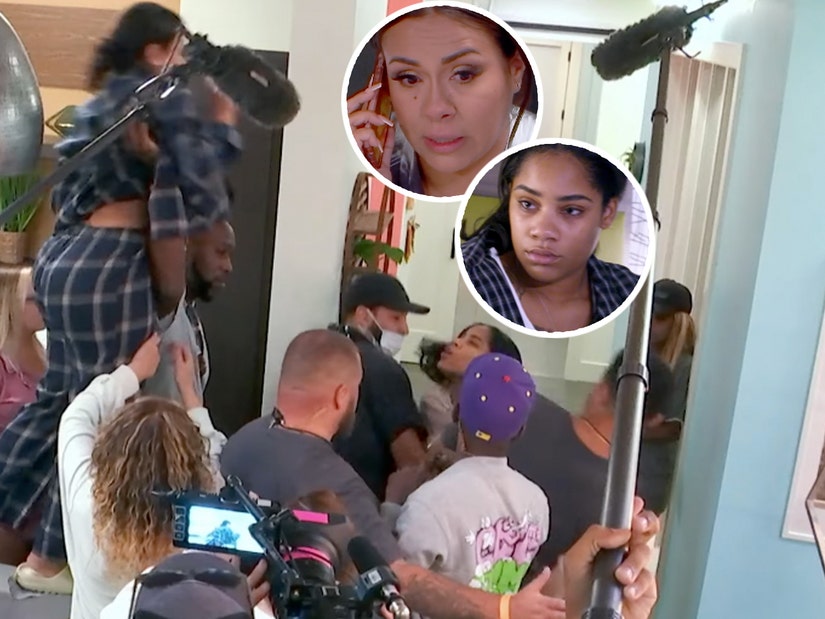 One of the women called the decision unfair, while one costar exclaimed it made them "beyond the point of pissed off and livid."

The fallout from last week's violent confrontation between the women of "Teen Mom Family Reunion" was swift on Tuesday's new episode -- which ended with four less cast members than it began.

ICYMI, Briana DeJesus and her mom Roxanne got into it with costar Ashley Jones and her mother Tea, after a fight over the women "talking s---" about each other on social media escalated into an all out brawl. During the scuffle, Ashley spit on Briana, who was then seen throwing a water bottle in her costar's direction. They had to be separated by production.

Watch it all unfold below:

"I'm actually upset I wasn't able to touch her because she spit on me," Briana said on Tuesday's new hour, as some of the other girls in the cast expressed they felt Ashley crossed a line with the spitting.

With Ashley and her mom at a hotel nearby and the rest of the cast tubing, Briana and her mom then met up with Dr. Cheyenne Bryant, aka Coach B, to break down what happened the night before.

"Ashley and her mother continued to talk crap and I guess things got heated at the dinner table and I got some spit on me," said Briana, admitting that she got physical with Ashley after the spitting.

She told Coach B she wanted to stay on the retreat with the other women, but Bryant had no answers from production on what the next steps would be.

"Moving forward, I can't be in the same vicinity as Ashley or even her mother. F--- them," Briana added in a confessional. "I want to move forward and continue working on things with my mother and making stronger friendships." 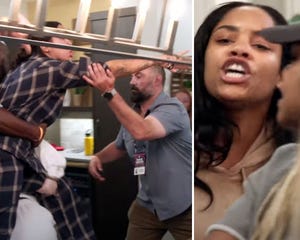 "I don't have a single regret and if it all played back, I'd do that s--- again," said Ashley in her own confessional before Coach B then visited her and her mom at a hotel. During the sit-down, Tea admitted she was "disappointed" in her reaction

Saying she was defending her mother, Ashley added, "The alternative to my spit was my fist. I regret that all I did was spit on her, after the way they came for my mama."

Ashley then explained that she had "so much going on" in her life to worry about -- including her husband Bar Smith being in jail and her pregnancy -- and was "just hanging on by a thread." When asked if she wanted to stay, Ashley said she didn't, adding, "None of this seems worth it to me."

"I don't have to be fake and smile with people I don't want to f---ing be around. It was nice to see those girls that I do enjoy seeing occasionally," she added in a confessional.

While the show made it look like Ashley and Tea left on their own accord, Tea admitted she felt production wouldn't let them return to the home to film with the other women anyway. She was right. 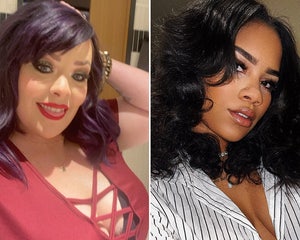 Cameras next followed a team of producers as they met with Briana and Roxanne, where the producers said the throwing of the water bottle was "a significant breach of contract" and the pair would "have to go home."

Briana tried to claim self defense, saying she only threw it after she was spit on, but he didn't budge -- telling her, "it doesn't matter first or not. It's going to apply to all of you."

Explaining the water bottle toss could have caused serious injury, he told them, "You're all going home. You're not being singled out" -- making it clear Ashley and Tea were also booted.

"I wasn't the aggressor. I wasn't here to cause problems. I was literally trying to defend myself," Briana said in a confessional, to no avail. "I still don't understand why I have to go and I don't think it's fair. But it is what it is."

At that point, word started to spread to the other women -- and Jade Cline was fuming.

"She got assaulted. She didn't assault someone. So how is it she has to leave? What the f--- is the point?" she exclaimed in a confessional. "I'm beyond the point of pissed off and livid. I came here to grow closer and also to spend time with one of my best friends and she's leaving."

"This doesn't make any sense whatsoever at all," she added. "I can't even comprehend what's happening right now."

As the van of women returned to their retreat after their day of tubing, an emotional Cline shouted, "I hate these f---ing people, I hate this f---ing place! I wanna go home so bad." She reiterated her desire to leave in a final confessional ... could she be out the door next?