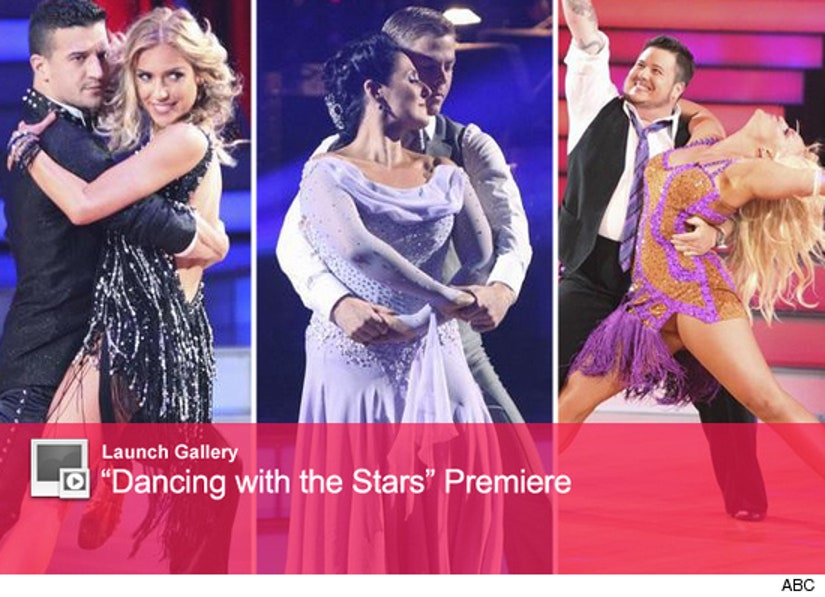 Two of the least controversial contestants made the biggest mark on the judges on Monday's premiere of "Dancing With the Stars."

Singer Chynna Phillips and veteran-turned-actor J.R. Martinez topped the Season 13 leaderboard after night one. Both stars danced to a Viennese waltz, tying for first with a score of 22/30.

Ron Artest and Peta Murgatroyd kicked off the night with an entertaining but sloppy cha cha cha. Ron sported a blond haircut with "world peace" etched in it. Theirs was the worst performance of the night -- watch it again below:

Rob Kardashian and Cheryl Burke were up next, cheered on by the entire Kardashian clan. Judge Carrie Ann Inaba was pleasantly surprised by his poise and said he had "potential."

Phillips and Tony Dovolani opened with a beautiful dance spin and were elegant throughout their waltz. Her husband William Baldwin cheered from the stands.

Nancy Grace genuinely looked like she was having fun on the dance floor with Tristan MacManus and brought her three-year-old twins to the show.

Elisabetta Canalis was next, but it was her partner Val Chmerkovskiy that got attention for performing shirtless. Her expression didn't quite match the intensity of his.

Val's brother Maksim and his partner Hope Solo are an athletic pair, but executed a pleasing waltz, followed by an energy filled routine by Carson Kressley and Anna Trebunskaya.

J.R. Martinez definitely earned fans with his performance with Karina Smirnoff. The veteran, who was disfigured in a mine blast, performed a strong and emotional waltz, getting a partial ovation from the audience.

Chaz Bono closed the night with a high-energy cha cha cha with Lacey Schwimmer. The show's first ever transgendered contestant danced through controversy and pain to place near the middle of the pack.

The contestants were introduced on the new split-level stage. Something else new for the season: host and newlywed Brooke Burke Charvet taking her husband's name.

Below are the scores for each couple:

Who impressed you the most? Tell TooFab in the comments below!