UPDATE: Chaz performed a paso doble to the "Rocky" theme and scored a 21/30. Cher got emotional after the dance -- and Chaz said it was "amazing to have her support." Check out the video above!

Cher is in the house!

Last week, Chaz Bono promised fans that his mom, the one and only Cher, would attend tonight's taping of "Dancing with the Stars" if he made it through another week -- and he delivered!

The famous pop star was just seen in the audience, about 30 minutes into tonight's 2 hour show -- seated next to Courteney Cox, daughter Coco and her own mom Georgia Holt wearing one heck of a wig. 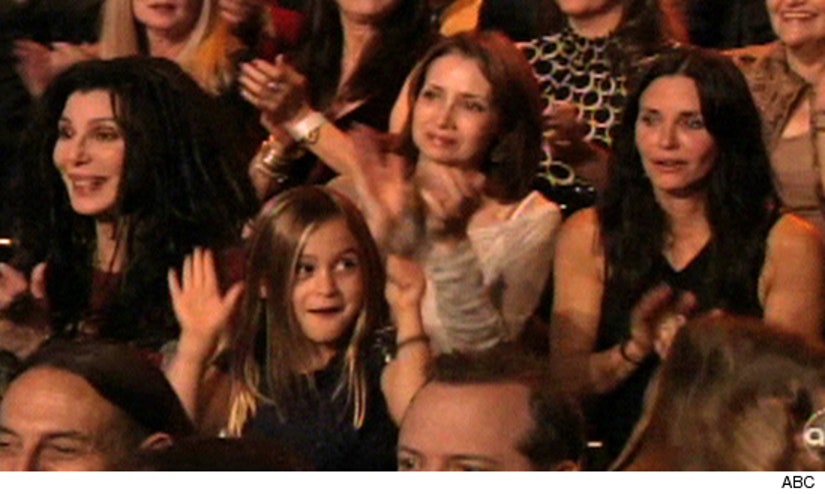 Also cheering Chaz on in the audience is Congresswoman Mary Bono Mack, who was married to Sonny Bono at the time of his death and helped raise Chaz.

Chynna Phillips and Tony Dovolani kicked things off on movie soundtrack-themed night with a tango to "Mission Impossible." After showing promise in the early weeks, Chynna appears to have some confidence, and fumbled with some footwork. The scored a 21/30.

David Arquette and Kym Johnson performed a paso doble to "Raiders of the Lost Ark," complete with whip prop. While Phillips has been fading, Arquette has been steadily improving. His technique was sloppy at points, but judge Carrie Ann Inaba priased his new strength and charisma. They earned a solid 23/30.

You can always expect an entertaining routine from Carson Kressley, and he did not disappoint. He and Anna Trebunskaya performed a waltz to "Pirates of the Caribbean," with Kressley channeling Jack Sparrow -- guyliner included. There was some swashbuckling and even some patty-cake playing. It was more of a show than dance, so they got nailed by the judges. Len Goodman likened it to childbirth: "terrible while it's happening, joyful when it's over." They only scored a 20/30.

Nancy Grace and Tristan MacManus performed a competent but bland routine to "Flash Gordon." Judge Bruno Tonioli wants her to be a ballbreaker. Unfortunately, the only excitement she's generated this season has been as a windbreaker ... allegedly. 21/30.

Hope Solo and Maksim Chmerkovskiy redeemed themselves with a pleasing foxtrot from "Toy Story." Hope showed a lot more grace and fluidity than previous weeks, and Inaba said she was smiling the entire time. They earned a 24/30.

Now that's he's made it to week 4 of the competition, Rob Kardashian has officially lasted longer than his sister Kim, and has no signs of slowing down. The reality star and partner Cheryl Burke did a fun paso doble to "Superman," where Rob shed his Clark Kent-esque glasses. He's transformed into a confident dancer too -- 24/30.

The leaders two weeks in a row -- Ricki Lake and Derek Hough -- seemed to struggle in rehearsal. "I am going to have a breakdown. I just can't do it," Lake said of the pressure in the competition. "It's just very confusing for me. I am not getting it. I want to quit. Like I totally want to quit -- and I am not a quitter." Fortunately, she was able to pull it together for a suspenseful and seductive tango to "Psycho." They earned the first 10s of the season -- two, in fact -- for a total of 29/30.

As mentioned before, Chaz Bono and his partner Lacey Schwimmer performed a paso doble to "Rocky." As with the quickstep, Chaz struggled a bit to keep up with the pace of the dance, but put in his all. Cher couldn't be prouder, and Inaba is in tears routing for him. They earned 21/30, making them not the lowest scorers for the first time in two weeks.

J.R. Martinez and Karina Smirnoff did a total 180 from their emotional military tribute with a fun and upbeat foxtrot from "The Pink Panther." Again, they showed some of the best technique of the night, but Inaba dinged them for a lift. They finished behind Ricki and Derek (again) with 26/30.

Who will go home tomorrow night? As last week's shocking elimination proved, anyone can go!

Tell TooFab your thoughts below.