Part 1 of the "Real Housewives of New Jersey" reunion airs this Sunday, and judging by the preview below, things will get nasty.

All season long, Teresa Giudice has been feuding with her sister-in-law Melissa Gorga and cousin Kathy Wakile. Now it seems that things have gone south between Giudice and friends Caroline Manzo and Jacqueline Laurita, too. Yes, Teresa's taking on everyone! Get a glimpse below:

Here's where things stand between "Tre" and the other castmembers.

Jacqueline Laurita: Teresa's former BFF opted out of the reunion taping entirely. Teresa was allegedly trying to ambush Melissa about her past working in a strip club, and Jacqueline would have no part of it. "Someone (not me) got set up tonight. There are some sneaky people trying to make someone look bad & then play innocent on camera," Jacqueline tweeted.

Teresa also accused Jacqueline of threatening to release photos of her husband Joe and another woman, which Jacqueline denied. Jacqueline took to Twitter to defend herself and called Teresa "scum."

Caroline Manzo: Apparently, Teresa's dig at the Manzo matriarch calling her "as Italian as Olive Garden" was just the tip of the iceberg. Details are unclear, but somehow Caroline's relationship with her sister (and former castmember) Dina Manzo was damaged, and Caroline blames Teresa for it.

"You're a freaking liar. No wonder Dina doesn't want to speak to you," Teresa snaps at Caroline in the preview.

Melissa Gorga: Although it appeared the sisters-in-law made peace for the sake of their children, things seem to be as bad as ever, after the aforementioned ambush.

"You're the devil!" Teresa fumes. "I'm looking at the exorcist right now."

Kathy Wakile: Kathy comes out relatively unscathed during the preview (even sharing the same sofa with her Teresa). But all season long, their was tension between the cousins after Kathy said Teresa's children were left unattended during the now infamous christening brawl.

Are you Team Teresa or Team Everyone Else? Tell TooFab in the comments below! 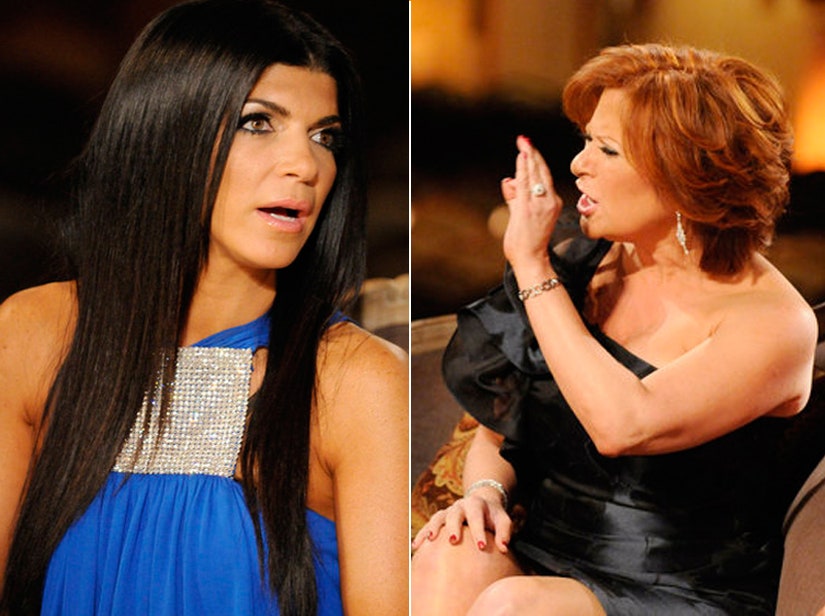