Nominations for the 84th Academy Awards were announced (bright and early) Tuesday morning, and while a lot of nods in the major categories were expected, there were a ton of surprises and more than a few snubs. 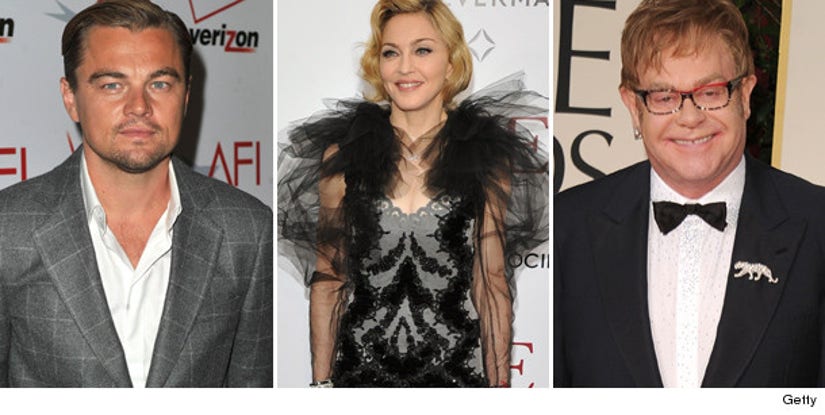 - The Tom Hanks/ Sandra Bullock starrer “Extremely Loud and Incredibly Close,” which was completely overlooked by both the Golden Globes and SAG Awards, snagged a Best Picture nod.

Not only that, the film also scored a Best Actor in a Supporting Role nomination for its octogenarian star Max von Sydow … who doesn't even utter a word in the flick.

- There was much buzz surrounding Melissa McCarthy going into the nominations, but did we really expect the (typically stodgy) Academy to honor such a funny and crass role as Megan from “Bridesmaids?” Surprise! Melissa indeed snagged herself an Actress in a Supporting Role nod.

- There are only two nominees in the Original Song category … and the songs were sung by a puppet and animated birds!

“Man or Muppet” from “The Muppets” (music and lyrics by “Flight of the Conchords” star Bret McKenzie) was sung by the adorable Walter the Muppet and the equally adorable Jason Segel. “Real in Rio” from “Rio” (music by Sergio Mendes and Carlinhos Brown, lyrics by Siedah Garrett) was performed by animated birds voiced by Jesse Eisenberg, Anne Hathaway, Jamie Foxx, George Lopez and will.i.am.

What does it mean? Only that these are sure to be the best song performances at the Oscars since the epic “Blame Canada” number from “South Park: Bigger, Longer & Uncut.”

- “Transformers: Dark Of The Moon” was nominated for 3 Oscars. Yes, you read that correctly -- 3 nominations. It just had to be said.

- The Academy allows for 10 Best Picture nominations … and chose to go with 9. Really? You couldn't try to be cool and just add “Bridesmaids” to the list? Lame.

- There were some big oversights in the Actor in a Leading Role category, with critical darling (and envy of George Clooney) Michael Fassbender left off the list for his gritty portrayal of a sex addict in “Shame.” Too explicit for the Academy? Probably. Another sad snub is Leonardo DiCaprio for “J. Edgar.” Oh Leo, one day you will get that elusive Oscar, we just know it!

- Tilda Swinton has received numerous accolades for her turn as a mother coming to grips with the fact that her son is a sociopath in “We Need to Talk About Kevin.” The Academy, however, left her off the Best Actress in a Leading Role list in favor of Rooney Mara in “The Girl with the Dragon Tattoo.”

- Remember the catfight that went down after the Golden Globes between Madonna and Sir Elton John and hubby David Furnish? Well we won't see a replay of that as, we mentioned above, there were only two Best Original Song nominees … and neither Lady M nor Sir Elton was included.

- “Drive” may have received audience and critical praise, but the film was shut-out in all major categories. Actor in a Supporting Role favorite Albert Brooks took a jab at the oversight, tweeting this morning “I got ROBBED. I don't mean the Oscars, I mean literally. My pants and shoes have been stolen. And to the Academy: 'You don't like me. You really don't like me.'”

- “Young Adult” is another film that earned a lot of buzz, especially for its actors Charlize Theron and Patton Oswalt, yet was completely overlooked. Patton went on a hysterical Twitter rampage this morning to poke fun at the snubs … all of them. Highlights include:

“Join me for a drink at The Drawing Room, @AlbertBrooks? Me and (Andy) Serkis have been here since 6am. “
“@AlbertBrooks Oh s#*! -- we're DEFINITELY going to run out of booze. Charlize & Tilda just pulled up in a stolen police car.”
"@AlbertBrooks Dude, GET DOWN HERE. (Ryan)Gosling is doing keg stands and (Elizabeth) Olsen & (Kirsten) Dunst LITERALLY just emerged from a shower of rose petals."
"@AlbertBrooks Oh. My. God. Just pulled up to Legoland. DiCaprio's rented the park for the day. Dibs on the Duplo Gardens! #andscene"

- “Hugo” leads the pack of nominees with 11 nods for the film … none of which are for acting.

- With Original Score nominations for “The Adventures of Tintin” and “War Horse,” legendary composer John Williams has now earned a total of 47 Oscar nods. He is the second most-nominated person ever, behind only Walt Disney, who earned 59 nominations. Among those still living, Woody Allen follows behind John with a total of 23 noms, including two this year for writing and directing “Midnight in Paris.”

- The amazing Meryl Streep continues her dominance as the most-nominated performer in Oscar history, receiving her 17th nod this morning for “The Iron Lady.”

- The five Actress in a Supporting Role nominees -- Berenice Bejo, Jessica Chastain, Melissa McCarthy, Janet McTeer and Octavia Spencer -- are all first-time nominees in this category. In fact, this marks the first nomination ever for four of the ladies – the exception being Janet who was nominated for Lead Actress for “Tumbleweeds” in 2000.

- On a sad note, the husband and wife writing team of Peter Straughan and Bridget O'Connor were nominated for Best Adapted Screenplay for “Tinker Tailor Soldier Spy,” though Bridget passed away from cancer in 2010 at the age of 49. Peter issued a statement this morning, noting “I wish more than anything in the world that my wife Bridget O'Connor - who did the lion's share of the adaptation - could be here to enjoy this moment. She would be so happy and so proud. I'm going to go and meet my daughter now and tell her how clever her mother was!”

- At the ripe, old age of 82, both Christopher Plummer and Max von Sydow were nominated for their Supporting Roles in “Beginners” and “Extremely Loud and Incredibly Close.” If either wins, he will become the oldest Oscar winner ever, surpassing Jessica Tandy who was 80 when she won for “Driving Miss Daisy.”

- And finally, for the second time, George Clooney has earned nods in two different categories (Lead Actor and Adapted Screenplay) for two different movies (“The Descendants” and “The Ides of March”) in the same year. In 2005 he won Best Supporting Actor for “Syriana” and was nominated for Original Screenplay for “Good Night, and Good Luck.” Seriously, is there anything this man can't do?

What were your biggest surprises or snubs of the day? Let us know in the comments below!