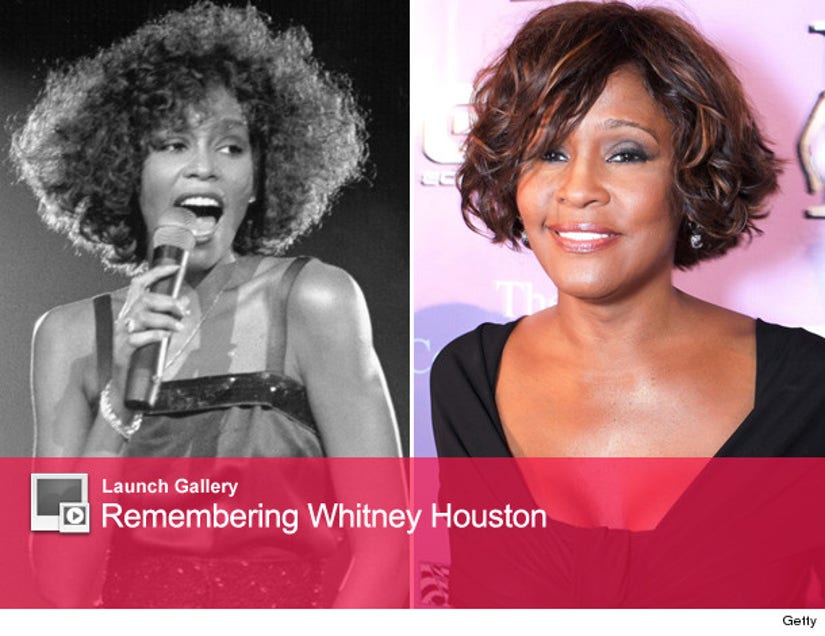 Like most of us, Hollywood was shocked and saddened by the death of pop icon Whitney Houston at age 48. Celebrities took to Twitter in droves to express their sadness and condolences.

Mariah Carey, who sang with the duet "When You Believe" with Whitney, changed her Twitter photo to a shot of them together smiling.

Mariah Carey @MariahCarey: Heartbroken and in tears over the shocking death of my friend, the incomparable Ms. Whitney Houston.... My heartfelt condolences to Whitney's family and to all her millions of fans throughout the world.... She will never be forgotten as one of the greatest voices to ever grace the earth.

Others echoed Mariah's praise for Whitney as one of the "greatest voices" and quoted one from her arguably her most famous song "I Will Always Love You."

iamdiddy @iamdiddy: Whitney Houston!!! OMG!! I really can't believe this.. This is one of the saddest days ever..

Gloria Estefan @GloriaEstefan: Someone please tell me that it's not true about Whitney Houston passing! Such an amazing talent!

Randy Jackson @YO_RANDYJACKSON: wow I am devastated. the world has lost another one of the best voices in history. RIP whitney houston...

La Toya Jackson @latoyajackson: I can't fathom the fact that #whitneyhouston has died! My heart goes out 2 her mother, daughter & her love ones. #Whitney U will be missed!

Katy Perry @katyperry: So devastating. We will always love you Whitney, R.I.P.

Justin Bieber @justinbieber: just heard the news. so crazy. One of the GREATEST VOICES EVER just passed. RIP Whitney Houston. My prayers go out to her friends and family

Nina Dobrev @ninadobrev: #iwillalwaysloveyou is one of the most beautiful and iconic songs. It will be remembered forever. Rest in peace Whitney Houston

Ralph Macchio @ralphmacchio: Wow, just heard - been off the grid the last few hours. So sad. RIP Whitney. THE Voice!

Billy Ray Cyrus @billyraycyrus: R. I. P. Whitney Houston. I will always love you and your music and talents will live on forever.

LA LA @lala: Words can not express my sadness and sorrow at this time. Praying for Whitney Houston and her family. Somethings are truly unbelievable.... I love you Whitney Houston. There will never be another. Ill always remember the sound of your voice and the impact ur music had on my life

Rev Run @RevRunWisdom: My heart is saddened.. Everyone please keep Whitney Houstons family in their prayers.. May she rest in peace

Amber Patrice Riley @MsAmberPRiley: I had to pull over off the road. RIP Whitney Houston. I'm glad now that I got to meet you and thank you for your beautiful music.

Kevin McHale @druidDUDE: it's incredible the impact one voice can have. Whitney, you changed so much. A true Icon.

Melissa Joan Hart @MellyJHart: I'm shocked to hear about Whitney Houston!!! RIP!! You will be missed!

Eliza Dushku @elizadushku: Oh #WhitneyHouston no.. We will always love you. #RIPWhitney

Sean Hayes @theseanhayes: The voice of a music legend has been quieted today. R.I.P. for one of the most amazing artists of our time - Whitney Houston.

Selita Ebanks @MsSelitaEbanks: #Moment of silence for one of the greatest voices of all time.... Whitney Houston :-( #RIP

Keshia K Pulliam @peachespulliam: I just read that Whitney Houston died today... I am in shock!! We've lost too many amazingly talented people this year

SHAQ @SHAQ: R .i.p to a Newark legend Whitney houston. I'm gonna miss auntie ,this one hurts. We lost a legend dam dam dam. Thank you for everything

Ricki Lake @RickiLake: Listening to #WhitneyHouston on the radio. What a loss. :(

AKON @Akon: We've lost another Legend. RIP WHITNEY HOUSTON. I'm Honored to have had the chance to work with such an amazing human Being

Mena Suvari @mena13suvari: OMG!!! RIP Whitney Houston! You forever were and always will be amazing. A voice that brought inspiration to many.

Goldie Hawn Goldie Hawn @goldiehawn: I am so very sad to hear of Whitney Houston's passing. She was one of our great artist that graced us all. May she rest in peace.

Jay Manuel @MrJayManuel: The American Golden Voice has been silenced. RIP Whitney Houston. Her rendition of the Star Spangled Banner always moved me to tears.

John Legend @johnlegend: I hope the Grammys can put together a tribute at the last minute

NeNe Leakes @NeNeLeakes: OMG Noooooooo! I was just @ an event Thursday & Whitney was there! I can't right now

LeAnn Rimes Cibrian @leannrimes: Whitney Houston was the first cd I ever bought. She had a God given gift. Hopefully, she's singing with angels now.

Paris Jacksoη Paris Jacksoη @ParisJackson:R.I.P. Whitney Huston, I've always idolized her and her amazing talent
boygeorge @BoyGeorge: Whitney is dead, OMG, I'm so heartbroken. You were amazing and I hope you have found peace! x

Lance Bass @LanceBass: Another incredible talent lost way too soon. Thanks for entertaining us all Whitney!

Piers Morgan @piersmorgan: Stunned by Whitney Houston's death at just 48 - one of the greatest voices ever heard. #RIP

Nia Vardalos @NiaVardalos: RIP Whitney Houston, we sang along and fell in love to your songs.

Holly Robinson Peete @hollyrpeete: Whitney: Thank You. You gave so much to us. Inspired the world. #soundtrackofmylife #iwillalwaysloveyou

Denise Richards @DENISE_RICHARDS: So sad to hear about Whitney Houston..my heart goes out to her loved ones and her daughter..

Danica Patrick @DanicaPatrick: Can't believe Whitney Houston passed away. So sad. "I will always love you" will live forever. She made beautiful music.

Trevor Donovan @trevdon: Whitney Houston left a magnificent musical legacy & thats how she should be remembered. She made millions of people happy with her songs