UPDATE: Well, it looks like Chris Brown decided to fire back at those who were upset with his seemingly warm welcome at Sunday's Grammy Awards ... and he kept it classy as ever.

According to Mashable.com, the 22-year-old singer took to his Twitter account on Tuesday afternoon with the following message: "HATE ALL U WANT BECUZ I GOT A GRAMMY Now! That's the ultimate F--- OFF."

He or someone from his team went on to delete the offensive tweet from the account, but not before Mashable was able to grab a screenshot (warning, graphic language) of it.

Miranda Lambert wondered why the convicted felon was featured on not one but two performances (she also called Nicki Minaj's performance "strange").

On Monday, the country superstar tweeted "Chris Brown twice? I don't get it. He beat on a girl ... Not cool that we act like that didn't happen. He needs to listen to Gunpowder and lead and be put back in his place. Not at the Grammys."

"Gunpowder" is a reference to Lambert's 2007 hit "Gunpowder and Lead." The lyrics describe a woman preparing to kill her abusive husband when he gets out of jail. "His fist is big but my gun's bigger. He'll find out when I pull the trigger," the narrator sings. 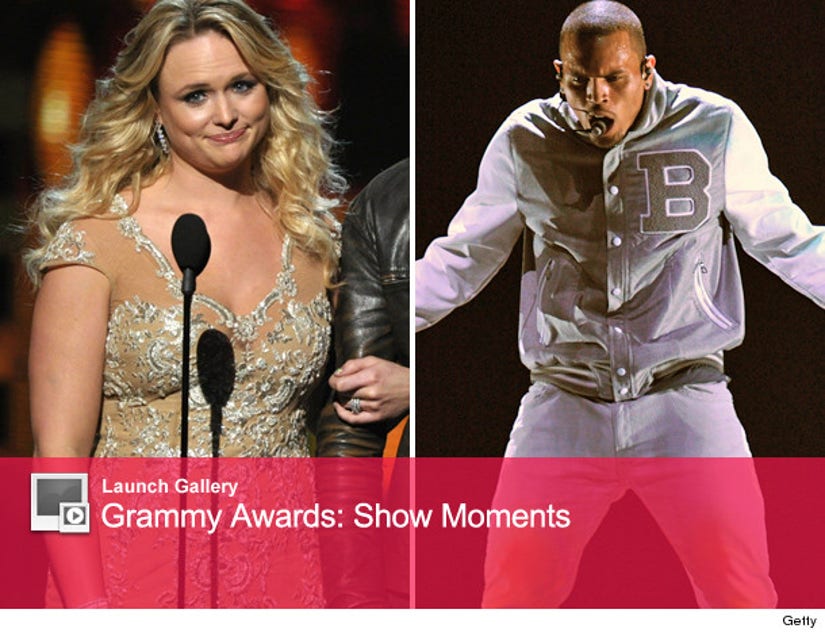 Lambert isn't the only celebrity who questioned Brown's presence on the show, but it was certainly the most outspoken.

"Looks like all is forgiven (with) Chris Brown," Sherri Shepherd tweeted. "That's all I'll say."

Chris pled guilty to assaulting his former girlfriend Rihanna on the eve of the 2009 Grammys. He was sentence to five months probation, six months of community labor, and ordered to stay 50 yards away from Rihanna, though that was reduced to only 10 yards if they attended a music event together.

As of press time, Chris had not responded to Miranda's tweet. His latest tweets were from Grammy night and were celebratory in nature: "Team breezy we have come along way and I'm so appreciative of you guys!!!! No matter what anyone says.... WE MADE IT!!"

Chris Brown's reps had no comment when toofab reached out to them.

Do you feel the Chris Brown backlash is warranted? Vote in our toofab poll below!