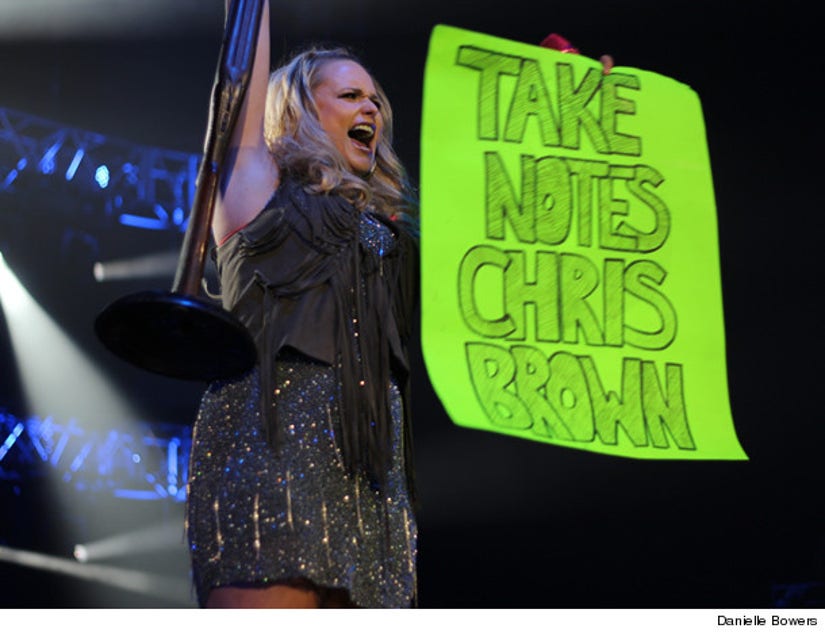 The music world's most random feud rages on -- with Miranda Lambert stepping up her game by blasting Chris Brown in concert!

The battle began earlier this week, after Miranda Lambert wondered on Twitter why the convicted felon was featured on not one but two performances during the Grammy Awards.

"Chris Brown twice? I don't get it. He beat on a girl," she tweeted, before adding "Not cool that we act like that didn't happen. He needs to listen to Gunpowder and lead and be put back in his place. Not at the Grammys."

"Gunpowder and Lead" is Miranda's single about a woman preparing to kill her abusive husband -- and as she got ready to sing the song last night at a UMass concert, she couldn't help but slam Brown again.

Before singing, Lambert pulled a poster out of the audience reading "Take Notes Chris Brown."

"Get a good picture now, put it on Twitter," she said, while holding the poster up. "I've been in a world of hurt with Chris Brown fans lately ... but see, I just have to speak my mind because where I come from beating up on a woman is never okay.”

As she launched into the song, Lambert added "So that's why my daddy taught me early on in life how to use a shotgun." The crowd went wild -- watch below:

So what's Chris saying about the ordeal? Well, earlier this week he tweeted "HATE ALL U WANT BECUZ I GOT A GRAMMY Now! That's the ultimate F--- OFF" -- but then removed the post.

Earlier today he also posted "Let them be mad!!!! We make music. Don't like it, don't listen! Turn up the music remix is coming soon too! Guess who's on it?"

BIG thanks to Danielle Bowers for tweeting the front row photo above during the show!