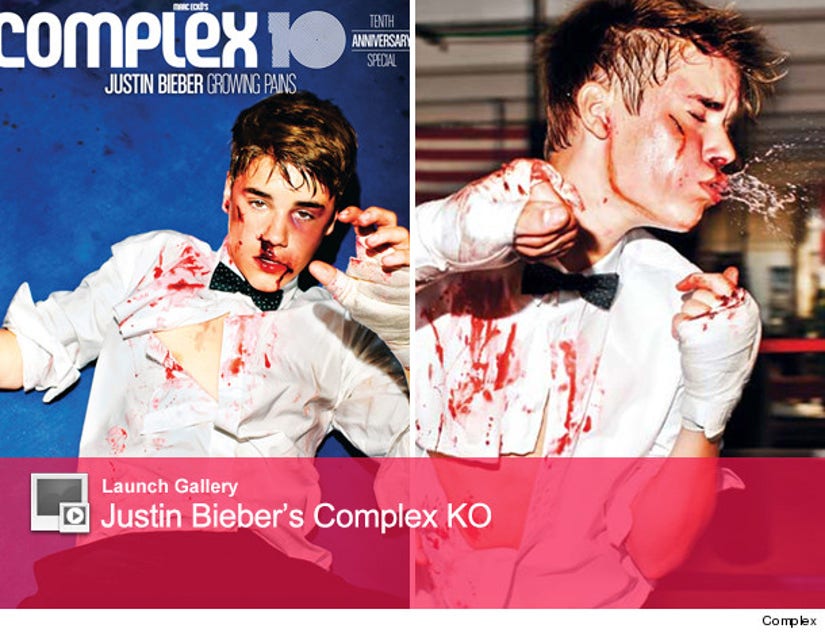 Justin Bieber is taking a beating!

The teen pop star gets gritty in the April issue of Complex magazine, where he gets a few fists to the face in a boxing-themed photo shoot.

Sporting a torn shirt, bloody face and serious bruises, it's a far cry from the polished pop star we see on stage during concerts.

In the magazine, Bieber reveals why he and girlfriend Selena Gomez decided to stop hiding their relationship.

“There's no way to hide the relationship completely, because then it would be unfair to us,” he says. “It's like, 'You take this car, and I'll take this car, and then we'll meet up at the spot. Then, you go in this door, I'll go in this door. We'll end up crossing ways. You get back in this car. We'll cross over, do a James Bond. You go through the kitchen. I'll go through the back area. Then we'll meet in the dressing room and see each other.' At that point, it's not even a relationship. You're just hiding from everyone. That's unfair and unhealthy, man."

Watch video from the bloody shoot below ... and for more pics, go to Complex.com.